END_OF_DOCUMENT_TOKEN_TO_BE_REPLACED

NINETY PER CENT is my low-balled estimate of many people in the investing public are herding when it comes to the bond market, writes Gary Tanashian in his Notes from the Rabbit Hole.

You may not know it, because the overwhelming psychological atmosphere is to reaffirm, not question peoples' behavior. That is what herding is; a comforting feeling of going with the flow and being at one with your environment and the greater zeitgeist.

Now, please don't be offended by this idea. You, dear reader, may well be one of the 10%. But out there in the financial investment realm, they are herding, BIG time, as bond yields are expected to continue rising, because...media; because..."Great Rotation, part 2" and because...the story of epic secular changes and the chance to be early and clued in to a great new market phase are so alluring.

Bonds may well be about to change to bearish, but yields (which go in the other direction) have not even hit the points that have limited them historically. So why not tap the breaks on the hysterics until such time as the great secular change actually takes place?

I mean, just last summer 90% of "you2 were in full belief mode about NIRP. Think about that. You were buying the Zero and Negative interest rates story hook, line and sinker.

You are now being tended by the financial media, which has never given you a bum steer before (ha ha ha...) to believe that something that has not happened in decades is on the verge of happening now. I have reason to believe you may even be right, as that 'all-in to the NIRP!' side of the boat last summer was indeed a spectacularly emotional, potential bull-ender.

But...the public is getting all in on the rising yields story even as the 'limiter', AKA the 100 month EMA, on the 30 year yield is rapidly approaching.

Don't get me wrong; I believe that the bond market bull should end. Just look at this chart and tell me how good a job the bond vigilantes have been doing over the last few decades or so. The answer is that they haven't been doing their job, because they don't exist. 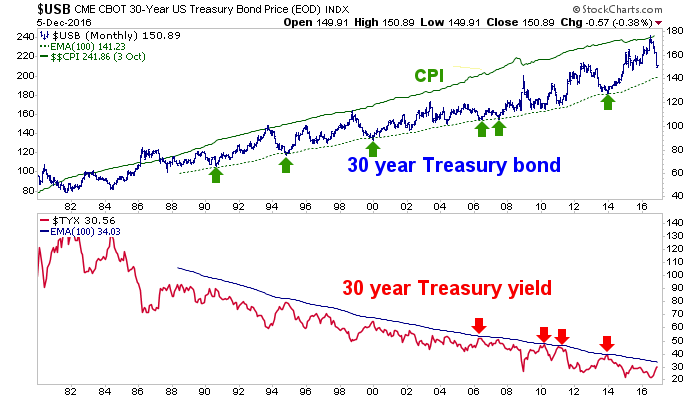 The vigilantes were a myth and have not been a reality since the Volcker era. Indeed, the expansion of credit has funded increasing prices every step of the way and through multiple regimes of both political parties. This has been a mechanism, not a market and the mechanism has used debt to create inflation. Trump? I believe those talking about Trump as an agent of change are full of their own dogma and bias. Trump will bring some changes, but he is setting up an administration peopled by the usual suspects and the changes are not likely to benefit the 'little guy', who put him on their tired shoulders and thrust him into power.

Here is the thing; when you look at the chart above you'll see that the secular bond bull has gone hand in hand with rising consumer prices. It has also gone hand in hand with rising asset markets. Everybody consumes, while it is only the investor classes that take advantage of rising asset prices. 'Rich get richer, poor get poorer' thy name is debt-fueled inflation; which will be deflated one day, especially if yields continue to rise, thereby cutting off the funding mechanism. The disenfranchised have voted for real change and the bond market is playing along so far.

The question is, will the administration, headed by a man who has over the course of his adult life leveraged debt for great wealth, actually oversee the secular changes that so many seem to think are at hand? Again, I am not at all saying it won't. But two things here...

Looking at the top panel of the chart above, the bond bull market is fully intact at this writing.