END_OF_DOCUMENT_TOKEN_TO_BE_REPLACED

Not with stocks this high...

The RECENT segment on bonds we sent subscribers took a turn to tin-foil territory to allow the letter writer to expose newer subscribers to his ideological views and thus bias, writes Gary Tanashian in his Notes from the Rabbit Hole.

That issue also got pretty talky on the precious metals as it did a thorough review of the sector's status, with silver's symmetry to 2016 a very key item.

Hint: An ill-fated bounce like so many that have come after the 2016 top is not what we are looking for with the next rally, but it ain't gonna be easy.

So I'd like to put the bond segment right here, because bonds/yields are so important to sector selections in stocks.

If this were October 2008 or March 2009 I'd say sure, cash is trash because risk vs. reward in stocks was very positive. But with the combination of a mature stock bull market showing signs of volatility and a rising Fed Funds rate the opposite situation is at hand...

Cash is not trash.

On the longer-term bond picture, while anti-bond sentiment had built up to a degree perhaps sufficient to propel the TLT bond fund ETF to its 200-day moving average (black) the pump to the 50-day average was fine for me to get off the contrary bond bounce play, at least actively using my own funds.

You get a triumvirate of experts pumped at you day after day by the media, you prepare for a contrary outcome. That manifested in a bounce. 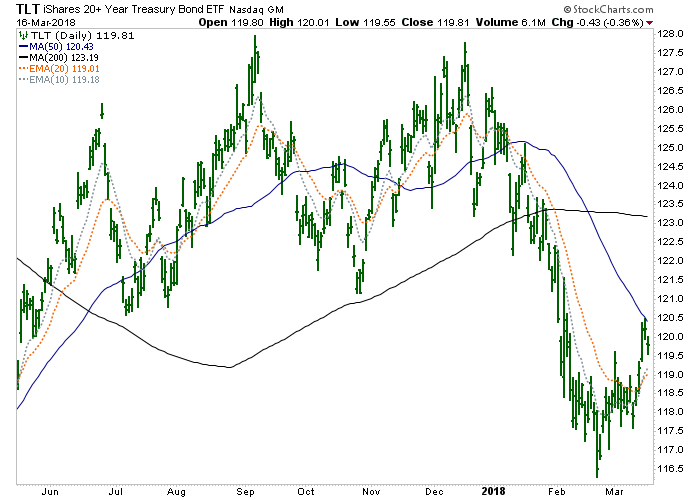 But what of inflation? What of deflation for that matter?

It is the age old story as a deflationary force pulls the macro toward its gaping maw (of debt reconciliation) while valiant policy makers (although some, like this letter's writer, would say manipulative and immoral), both at the Fed (monetary) and in politics (fiscal) try to forestall it by pumping ever more inflationary policy into the system.

That my friends is where the disparities of society come from: the unending supply of inflationary policy always at the ready to drive asset prices in one casino or another.

But in order to benefit, you have to have a seat at the table. The poor and middle class do not have seats, at least not with the high rollers.

I am going to go idealistic on you here for a moment. The system is in my opinion morally bankrupt and upon a would-be debt reconciliation, also legitimately bankrupt.

Short of a 2008-style liquidation however, as long as the Fed and political fiscal policy makers are allowed to do what they do – which is to inflate the economy at every sign of weakness – the system is not functionally bankrupt. It is inflated; a Keynesian experiment lurching forward after a near-death experience in 2008.

So you can see why I did not keep my Treasury bond funds as any sort of investor. As for T Bills, as long as there is a government that functions they should be okay. But one of my core beliefs is that it is all monetary chicanery, from the US Dollar to global currencies to bonds (debt) of all prominent indebted nations.

It's a magic show with paper and digital entries representing moving prices of all kinds, but with "value" also being a constantly moving target due to the manipulation of money supplies and debt instruments.

Value in my opinion, does not exist in the modern conventional realm. But the bottom line is that neither the United States nor other developed economies are going to go functionally bankrupt as long as central banking has a say in the matter.

Current asset owners can invest more and capitalize during the long stretches when debt reconciliation is not in play (most recently from 2009 to today, and previously from 2002 to 2008) and with central bankers perceived to be at the ready, always expect the next bailout if things go wrong. The poorer classes do not have the ammo to deploy during liquidations because they've barely managed to keep up with inflation during the previous centrally managed expansion.

And so it goes, and thus the reasons NFTRH uses bonds as market indicators much more readily than as serious investment alternatives. I just wanted to make that clear for newer subscribers as I may have been seen as pro-bonds out there in public of late. I am not pro-bonds, just anti-media touting that panics the herds at ill-timed junctures.

I am anything but pro-bonds. What I am is a macro signal observer. One critical signal is the Continuum (30yr yield) with its monthly EMA 100 'limiter' (aka Amigo #2).

So it is no surprise that with all the rising interest rate hysterics in play for the last few months, global yields have started to ease.

When playing it straight, the red line on the chart above is a caution point. When playing it idealistically I cannot see how the line of demarcation for a chronic inflator was not broken years ago.

Back to the US, the 10-year yield has moderated as long-term bond prices have bounced, pulling yields lower...

...but the 2-year continues apace, and thus the yield curve is still flattening.

The bigger picture view (of Amigo #3) is clear. It's a boom.

Measuring the S&P index in terms of gold prices (the SPX/Gold Ratio, aka Amigo #1) also says "It's a boom"...