END_OF_DOCUMENT_TOKEN_TO_BE_REPLACED

Sovereign debts are just the tip of the iceberg...

THERE IS a great bit in the classic British comedy series The Office where boss David Brent invites everyone – including new employees from a recent merger – down to the pub at lunchtime for a bit of bonding, writes Greg Canavan of the Daily Reckoning Australia.

Much to his disgust, not everyone turns up. Sipping a pint of bitter, he addresses the silent and bored looking table; 'Well this has been a bit of a washout...some of the best people haven't turned up.' It's obviously funnier delivered by Brent himself, but you get the gist.

French President Nicholas Sarkozy could well be thinking the same thing after, or actually before, Sunday's much-awaited Euro Summit. The supposed 'Grand Plan' to save Europe, which was to be concocted this weekend in time to present to markets by the Asian open on Monday, is looking very much like a washout.

Apparently the Europeans haven't agreed on much. As if a couple more days will make any difference, they're now scheduling another meeting for next Wednesday. Then – no, really – there will be an announcement with new and improved rescue plans.

In reference to Sunday's meeting, the Financial Times reports:

"There will be no agreements," said the senior German official. "This will now happen Wednesday at the earliest." French officials said the second summit could be held before Wednesday.

Let's be clear. These people have no idea what they're doing. Just a few days ago Sarkozy was warning of an economic meltdown if Sunday's summit didn't deliver.

Such warnings and threats are standard rhetoric for those – whether politicians or bankers – up against the ropes. They deliberately incite fear and apocalypse in order to get their own way.

But guess what? The world will move on. The only thing at risk is their tenuous grip on power.

While the equity market has rallied in the past few weeks on – unbelievably – optimism on a European solution, the larger (and less easily manipulated) bond markets continue to be a better source of information about what is really going on.

In a sign the crisis is beginning to move from the periphery to the core, French bond yields have risen sharply in recent weeks. Check out the Bloomberg chart below. 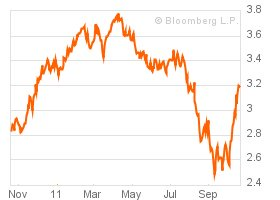 It's not panic stations yet, but it's a sign investors are increasingly concerned about France's fiscal position.

That's the problem with the Eurozone. It has a single currency but individual debt markets. So instead of selling the Euro as a bearish bet on the Eurozone, the market simply attacks each vulnerable country's bonds. It's a far more concentrated bet.

That's why the Euro has held up in all of this mess. Why sell the Euro when you can go right to the heart of the problem and sell Greek, Portuguese, Irish, Spanish, Italian and now French, debt...and buy German bonds with the proceeds?

But rising bond yields tell you much more than which country is in fiscal trouble. It is a realization by the market of the lack of real savings in the financial system.

The typical explanation for rising bond yields is 'because of inflation' or 'higher risk premiums associated with deteriorating finances'. Both of those explanations can be true.

But you'll never hear: 'bond yields are rising in XYZ country in order to encourage saving and discourage spending.' That's the actual role of interest rates set by the market...to coordinate a nation's resources between investment and production and consumption.

Because the market does not set interest rates, this crucial function ceases to work. And boy has it caused some problems. Persistent and artificially low interest rates encourage persistent consumption at the expense of saving and investment.

Actually, it's more complex than that. You're still seeing investment but because the savings are manufactured by central banks (via deposits of reserves in the banking system, created out of nothing) the investments are liable to turn 'bad' when the boom (created by easy credit) eventually ends.

That's why there's so much bad debt in the system now. A lack of real savings mean the price signals that should lead to profitable long-term investments are all out of whack. Many investments made in the credit boom years were based on false price signals.

So why are European bond markets now throwing off the 'correct' signals? It's by accident really, but the market is now setting interest rates in Europe nearly free of interference. Because the Eurozone operates a single currency without a single bond market, the region is almost functioning like it's on a gold standard.

That is, countries under financial pressure can't devalue their currency and try and trade their way out of trouble. Because they're tied to the Euro, they must devalue internally instead, via austerity and depression.

While all Eurozone members are tied to the Euro, each country's bond market still operates individually. So investors and speculators exert their harsh discipline via the bond market.

With the European Central Bank having a relatively disciplined mandate, there's no wholesale manipulation of bond prices going on. Therefore, European bond markets actually trade as they should.

The message the bond market is sending then? Increase real savings. This will aid capital formation and lead to sustainable economic growth. But it won't be painless. And there's the problem. Politicians in Europe want gain without pain. It won't happen.

Using this line of analysis, Australia is in a much better position. Interest rates and savings rates are high. These are real savings – funds set aside out of current income. While the high savings rate has caused recessionary conditions in the consumer economy, it's been mitigated by the benefits of a resources investment boom.

But there's a catch. This investment boom is largely the result of China's credit boom, artificially created by authorities to avoid a destabilizing downturn in 2008. It's not sustainable.