END_OF_DOCUMENT_TOKEN_TO_BE_REPLACED

Is there a bond bubble ahead? On these figures, it's inflating nicely...

This gives rise to the very real possibility of a bond bubble, we believe. So we decided to check the relationship between bond returns and bond fund inflows to see if there might be a correlation... 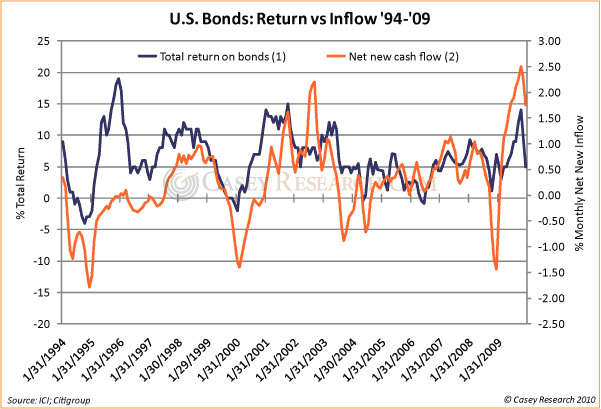 This chart measures the year-over-year change in the Citigroup Broad Investment Grade Bond Index. It plots the 3-month moving average of net new cash flow as a percentage of previous month-end assets. The data exclude flows to high-yield bond funds.

And, as suspected, the rise and fall in total return from bond funds is accompanied by an influx or exodus of bond investors. Data to construct the chart were taken from the Investment Company Institute's (ICI) 2010 Fact Book where they state:

"In 2009, investors added a record $376 billion to their bond fund holdings, up substantially from the $28 billion pace of net investment in the previous year. Traditionally, cash flow into bond funds is highly correlated with the performance of bonds. The US interest rate environment typically has played a prominent role in the demand for bond funds. Movements in short- and long-term interest rates can significantly impact the returns offered by these types of funds and, in turn, influence retail and institutional investor demand for bond funds."

ICI continues by noting that secular and demographic trends have tempered the appetite for equities. An aging population tends to become risk averse, and the Baby Boomers are entering retirement and seeking a safer alternative to the stock market. This occurrence is clearly shown on the right side of the chart. Following the stock market crash in 2008, investors exited stocks and bonds as general panic prevailed. As investor calm returned, a tidal wave of new money flowed into bond funds, turning 2009 into a record year.

And the popularity of bond funds continues. So far this year, investors have funneled $200 billion in new money into bond funds. 2009 was also a record year for total assets and net new capital in bond funds from retirement accounts.

That is the view through the macro lens. Switching to a wide-angle lens gives one pause.

We can't help but draw similarities to the housing bubble that began inflating at the start of the new century. As home prices started escalating, they drew the attention of a growing pool of investors. And soon this becomes a self-reinforcing phenomenon; higher prices attract greater numbers of investors that drive prices higher. Likewise for bonds. Bond returns are rising because bond returns are rising. Got it?

We have entered the terminal phase of a bond bull market ushered in thirty years ago by Paul Volcker, who drove interest rates over 20%. With 30-year US government paper now under 4%, the easy profits have been made and the low-hanging fruit consumed. Investors today are shimmying out on a very tall and thin branch in search of higher "total return." The snapping of the branch – sending investors big losses – may not be imminent, but it is inevitable.

As we at Casey Research have discussed and warned about often, the fiscal misadventures of the US government will have their consequences. And one of the first victims will be bond investors as interest rates are forced higher, much higher, to attract buyers, particularly foreign buyers. When this happens, the total return on bond funds will be smashed.

The sad and pathetic irony: to escape the beatings endured in the stock markets, millions have sought safety in bonds. The punishment is not over.

We are afraid an awful lot of investors will be left asking, "What was I thinking?"

Get the safest gold at the lowest prices – start with a complimentary gram of Zurich gold at BullionVault now...