END_OF_DOCUMENT_TOKEN_TO_BE_REPLACED

Watch you don't get trampled...

IS THE thirty-seven year bull market in US Treasury notes dead? asks Jim Rickards in The Daily Reckoning.

Yields to maturity on 10-year US Treasury notes are now at their highest level since April 2011. The current yield to maturity is 3.21%, a significant rise from 1.39% which the market touched on July 7, 2016 in the immediate aftermath of Brexit and a flight to quality in US dollars and US Treasury notes.

The Treasury market is volatile with lots of rallies and reversals, but the overall trend since 2016 has been higher yields and lower prices.

The consensus of opinion is that the bull market that began in 1981 is finally over and a new bear market with higher yields and losses for bondholders has begun. Everyone from bond guru Bill Gross to bond king Jeff Gundlach is warning that the bear has finally arrived.

To paraphrase Mark Twain, reports of the death of the bond market rally have been 'greatly exaggerated.' The bull market still has legs. The key is to spot the inflection points in each bear move and buy the bonds in time to reap huge gains in the next rally.

That's where the market is now, at an inflection point. Investors who ignore the bear market mantra and buy bonds at these levels stand to make enormous gains in the coming rally.

The opportunity is illustrated in the chart below. This chart shows relative long and short positions in ten major trading instruments based on futures trading data. The 10-year US Treasury note is listed as '10Y US.'

As is shown, this is the most extreme short position in markets today. It is even more short than gold and soybeans, which are heavily out of favor. It takes a brave investor to go long when the rest of the market is so heavily short. 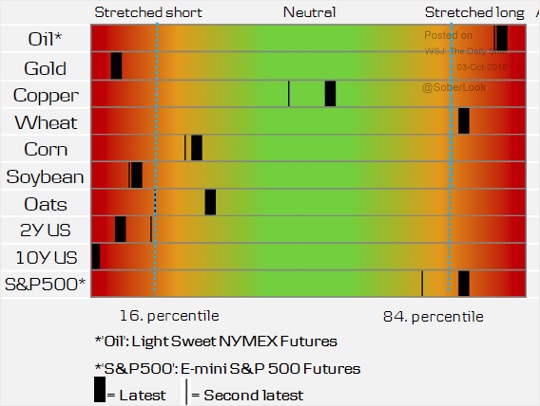 Yet, that's exactly why the opportunity to go long Treasuries is so attractive. With all of the big players (hedge funds, banks, wealth managers) leaning on one side of the boat, it only takes a small perturbation causing lower yields and higher prices to trigger a massive short-covering rally where these short investors scramble to exit their positions and buy bonds to cut their losses.

What are the chances that bonds rally and a short-covering frenzy emerges?

They're quite high. First of all, this pattern has happened five times in the past ten years starting in October 2008, April 2010, February 2011, March 2012, and December 2013. Each time 10-year note yields touched an interim high between 3% and 4%, the market turned around and yields crashed to the 1.5% to 2.5% range, producing huge capital gains in the securities.

In effect, the bond gurus and professional traders are betting that it's different this time. They're betting that the Trump economic changes and tax cuts have produced sustainable trend growth, that tight labor markets portend higher inflation, and that foreign investors are dumping Treasuries in anticipation of this inflation.

In fact, there's good evidence that every one of these assumptions is false.

Growth in the second quarter of 2018 and forecasts for third quarter growth are solid, but there's good reason to believe that these conditions are temporary responses to the tax cut and will not be sustained into early 2019.

In this political environment, you can only cut taxes once; there won't be another big tax windfall in 2019 to keep this game going.

There's also no evidence that labor markets are tight enough to cause inflation. The current 3.7% unemployment rate ignores that fact that labor force participation in only 62.7%, near the lowest in decades, and there are ten million able-bodied adults between the ages of 25-54 who are out of the workforce and not counted as 'unemployed.' In addition, there are millions more working part-time jobs who would prefer full-time employment.

Once the employment figures are adjusted for involuntary part-time workers and discouraged workers, the actual unemployment rate is close to 10%, which is a depression level rate. Labor markets are not tight at all (except by using cherry-picked government metrics) and therefore there's no reason to expect inflation.

Finally, the evidence that foreign investors are 'dumping' Treasury securities is overstated. Russia is getting out of Treasuries, but other countries are picking up the slack and China is holding steady. In any case, there is ample appetite among US banks to buy Treasuries so any foreign selling can be readily absorbed.

With these caveats in mind, what is the outlook for Treasury prices?

Apart from a few good quarters of growth, which we also saw several times during the Obama years, there's no reason to believe the US economy has entered a phase of strong self-sustaining growth of the kind that will lead to inflation and higher yields.

Productivity is low, labor force participation is low, foreign competition is stiff and the new trade war acts as a break on growth. These headwinds are the same ones we've been facing for ten years and there's no sign they're abating.

This next chart is also highly revealing. It shows that investor cash balances are at the lowest levels in thirteen years, even lower than the levels at the tail end of the 2002-2007 investment boom prior to the panic. 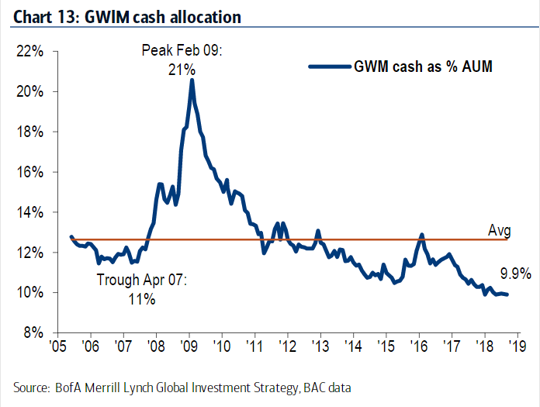 As this chart shows, investor allocations to cash are the lowest in over ten years and lower than the levels immediately preceding the financial panic of 2007-2009. Investors who lose money on short positions in US Treasuries will engage in frantic short-covering to mitigate losses and conserve cash. This buying will propel a rally.

With cash levels this low, investors cannot afford large capital losses. In effect, investors have bet the ranch on higher stock and corporate bond prices. At the first hint of market declines, they will pile into safe havens such as cash and Treasuries to preserve capital. This will give added impetus to the coming bond market rally.

Don't go along with the crowd on this one. If you're on the wrong side of this overcrowded trade, you could get trampled.