END_OF_DOCUMENT_TOKEN_TO_BE_REPLACED

In his early teens, Livermore went to Boston and started his long career in stock trading by posting stock quotes for the Paine Webber brokerage firm. He then began trading for himself and by the age of fifteen, he had reportedly produced gains of over $1000, which was big money in those days.

Over the next several years, he made money betting against the "bucket shops" in Boston. He did so well that he was banned from all such brokers in Boston, which prompted his move, at age 20, to New York City, where his speculative trading successes – and failures – made him a celebrity on Wall Street and around the world.

Jesse Livermore had no formal education or stock trading experience. He was self-taught and studied the reasons behind his winners and losers. It was these successes and failures that helped cement his trading ideas and tidbits of wisdom.

"It seems as though the markets are designed to fool most of the people, most of the time," he used to say, while emphasizing that most investors don't have the discipline to cut their losses short.

"The only warning signal an investor or speculator should ever want to have pointed out to him is the action of the market itself. Whenever the market does not act right or in the way it should – that is reason enough for you to change your opinion and change it immediately.

"Remember, there is always a reason for a stock acting the way it does. But also remember: the chances are that you will not become acquainted with that reason until some time in the future, when it is too late to act on it profitably,"

Although Livermore was focused on trading commodities and stocks, could his legendary advice be valuable for today's traders in the US Treasury's fixed income bond market?

The yield on the US's 10-year note is defying the expectations of the crowd once again. Back in April, "We're in the early stages of a bond bear market," analysts for J.P.Morgan warned. "We have lived in an era where central banks have distorted yields for so long that there's a group of people who are starting the business who don't know anything other than distorted yields."

Now central-bank purchases of bonds have shrunk to about a quarter of the size of what they were a year ago and – by J.P.Morgan's estimates – central bank's balance sheets will begin to contract on a cumulative basis in Q4 of this year.

"That becomes more problematic for the markets to digest," they warned. 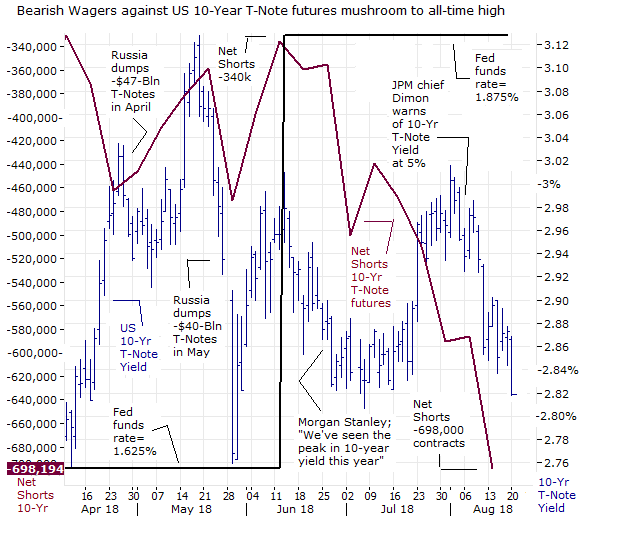 Most analysts on Wall Street predicted the 10-year yield would reach 3.50% this year. Morgan Stanley CEO James Gorman said in an interview at the end of May that he expected yields to keep climbing, likely finishing the year between 3% and 4%. J.P.Morgan chief Jamie Dimon warning as recently as August 6th, "I think 10-year rates should be 4% today.

"You better be prepared to deal with rates at 5% or higher – it's a higher probability than most people think."

However, since Mr Dimon made that bold prediction the yield on the 10-year T-note has moved in the opposite direction and has declined to touch 2.82%.

Still, the bearish case for the T-note market seems well supported. The US government's borrowing needs in the second half of this year will jump to the most since the financial crisis a decade ago as the nation's fiscal health deteriorates despite a strong economy. The Treasury expects to issue $329 billion in net marketable debt from July through September, the fourth-largest total for that quarter on record and higher than the $273 billion estimated in April. The forecast for Q4 is $440 billion, bringing the second-half borrowing estimate to $769 billion, the highest since $1.1 trillion in July-December 2008.

The yield on US 10-year bonds edged higher to 2.98% following publication of the borrowing outlook on July 30th. The Treasury is boosting sales of bills, notes and bonds to help finance a budget gap that's widening after President Donald Trump signed $1.5 trillion in tax cuts late last year and the Republican-controlled Congress approved a $300 billion spending increase. The deficit totaled $607 billion through the first nine months of the fiscal year that ends Sept 30, compared with $523 billion from the same period a year earlier. The Congressional Budget Office in late June predicted total government spending would exceed revenue by $1 trillion in 2020.

In the months of April and May, Russia's kingpin Vladimir Putin ordered the liquidation of a whopping $87 billion worth of Russia's holdings of US T-notes, and whittled its holdings to just $9 billion. The Kremlin's sales were blamed for part of the sudden surge in the 10-year T-Note yield from 2.70% at the start of April to the 7 year high of 3.12% in late May. Other foreign investors followed suit and sold a net $49 billion in Treasuries in June.

However, the month of August is lining up to be the best month for Treasury bonds in a year, as 10-year yields slide. That could be a major problem for the record amount of speculative shorts that have piled into the 'No brainer' bond bear positioning over the last few months. On the CBoT, the net short position in the 10-year T-note futures market has mushroomed to 698,000 contracts and the size of this massive position exceeds the record net Long position set in August 2007 by about 90,000. Shorts across 2-, 5-, 10- and 30-year Treasuries are even more unbalanced at a total of 1.61 million – that's more than twice as large as the peak long.

Jeff Gundlach – CEO of of DoubleLine Capital – warns that Treasury bets are so extreme that they're becoming a contrarian indicator in themselves, suggesting the massive build-up of speculative short positions in the US Treasuries market is setting those traders up for pain ahead.

Still, the US economy is strong enough to warrant further interest rate increases, Richmond Fed chief Thomas Barkin said on August 8th. The Fed's bankers next meet Sept. 25-26 and futures traders are pricing in an almost certain probability that the Fed will hike the fed funds rate 25 basis points to 2.125%.

Fed officials put the neutral rate at 2.90%, according to their median projection in June. Dallas Fed chief Robert Kaplan says the Fed should continue raising interest rates until they hit their neutral level, which he figures is "three or four quarter-point rate increases away.

"At that point, I would be inclined to step back and assess the outlook for the economy and look at a range of other factors – including the levels and shape of the Treasury yield curve – before deciding what further actions, if any, might be appropriate."

Even so, he admits that the shape of the curve of 10-year minus 2-year yields, which yesterday dipped to a new post-crisis low of 22 basis points, "suggests to me we are 'late' in the economic cycle" although he mitigated the risk, saying, "I do not discount the significance of an inverted yield curve."

With 10-year yields tumbling there is an uneasy feeling among most speculators that the bond and stock markets in the emerging nations, which make-up more than half of the world's economic output, can't handle a tighter Fed policy, and neither can the US housing market, the linchpin of the US economy.