END_OF_DOCUMENT_TOKEN_TO_BE_REPLACED

And it's all in plain sight...

JUST LOOK at what the Federal Reserve is doing to the US money supply, right in plain sight, writes Gary Tanashian in his Notes from the Rabbit Hole.

It is a hockey stick with the blade pointing up, but will one day turn into a big, bloated chicken and come home to roost. The Fed's global counterparts continue apace with inflation as well. 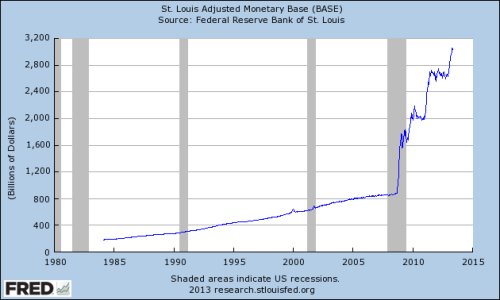 Meanwhile, economic data like M2?s velocity would give out of control monetarists free license to provide more of what they say is good for us, because newly printed money is not getting out into the economy to a sufficient degree. 'If we can just inflate a little more' think our myopic bureaucrats, 'maybe that will finally do it.' 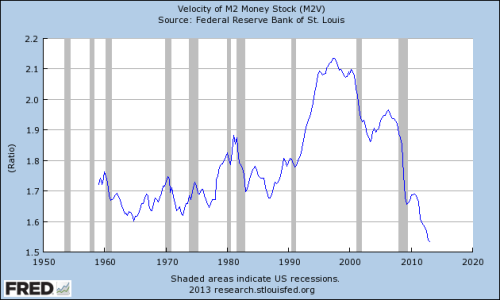 The sanitized story is that our Dear (Monetary) Leader is inflating to get unemployment down to such-and-such a level and inflation up to such-and-such a level. M2 velocity and other indicators of inflation's success show that the free money, printed up through legacy debt monetization are probably being hogged up, marked up and/or retained by the 'first user' banks to their own benefit. The same banks that in large part caused the systemic problems that the Fed is trying to remedy now. 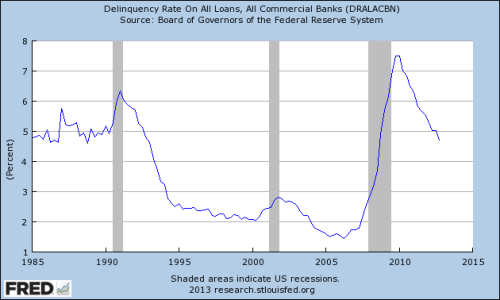 Yet to the extent that the new money gets out to the general public, it appears the public is using the funds to do the right thing and pay off debt and get current. This is a good thing, but in the public's hesitance to lever into asset speculation, the signs (outwardly visible price/cost effects) of inflation are just not there... yet. What will happen when the refugees from the 2008 crash transition from personal balance sheet repair to an urge to join the speculative party currently being promoted?

The last two graphs above are pictures of the deflationary backdrop that we might be tempted to believe is in play. The first graph is a picture of full speed ahead inflation being promoted against this. The majority apparently needs price confirmation that inflation is coming, and that could start to happen as households make their transition from prudence to casino mode.

In dropping below important support at 1524, gold has signaled no inflation problem – even though they are inflating to beat the band. US Fed, ECB, BoJ... it's a free license and powerful, revered policy makers the world over are basking in the sweet glow of adulation and submission by the confused masses.

Gold is on a bear market rebound, which is likely to fail or encounter extreme volatility somewhere at or below the red resistance line on the chart above. I would love to be wrong and indeed, with the fire that our Hero and his friends are playing with (inflation despite an outwardly stable economy; i.e. blatant bubble making), we just cannot know when they will lose control of inflation expectations.

Maybe it will be when the public completes its cycle of austerity, which is a normal reaction to the 2008 near death experience, and starts buying up assets at an increasing pace. Or maybe this very day (jobs) is as good as it gets and deflation will eventually grip and suck the whole construct down in a whirlpool of toxic swill.

But lose control they most likely will because while they can keep things in line over periods that are uncomfortably long for honest money advocates (but are actually quite ephemeral in the big picture of centuries, during which gold has acted as money), honesty will win in the end; even if many of us are dead by the time it happens.