END_OF_DOCUMENT_TOKEN_TO_BE_REPLACED

Four gargantuan problems we face right now – and their implications...

I'M STARTING to feel a bit like one of the unfortunate French stumbling through the fog in the Ardennes, circa 1914. Except that, instead of Germans full of deadly intent coming at me in the gloomy forest, it is a flock of black swans, writes David Galland, managing director at Casey Research.

As it was for the French in the Ardennes, the number of problems – then Germans, now black swans – is becoming overwhelming.

Consider just a little of what we as investors, and as individuals looking forward to retirement in accommodations more commodious than a shipping box, must contend with:

That ratio ensures that Japan's long struggles will continue, burdened as it also is with the aftermath of the deadly tsunamis and the ongoing drama at Fukushima. Adding to its woes are the commercial challenges it faces from aggressive neighbors, and maybe worst of all, the demographic glue trap it is stuck in, with fewer and fewer young to pick up the social costs of the old. Toss in the waterfall plunge in Japan's much-vaunted savings rate – formerly a big prop keeping Japanese interest rates down – and the picture for Japan is anything but tranquil.

Simply, it's a capitalistic country with a communist problem.

Now, in the same way that some people believe in leprechauns or any of dozens of other magical beings, some people believe that an economy can be successfully commanded just as a captain commands the crew of a Chinese junk cruising along the coast. It's a fantasy.

While the comrades in charge have done quite well – largely by getting out of the way of natural human actions – they are fast reaching the limits of their ability to navigate the shoals. As I don't need to tell you, China is a massive country, with hundreds of millions of people capable of every manner of human strengths and frailties. But if they share one interest, it is in a job that allows them to keep their rice bowls full and a roof over their heads. Said jobs don't come from government dictate – at least not on a sustainable basis – but rather by the messy process of free-wheeling commerce...and the more free-wheeling, the better.

In the July edition of The Casey Report, guest contributor James Quinn discusses the very real challenges facing China, not the least of which is that in the latest reporting period, official Chinese inflation popped up to 6.4%. Even more concerning was a 14% rise in the price of food.

Scrambling to keep employment high while also keeping inflation low, the Chinese government is throwing all sorts of ingredients into the mix – building ghost cities, raising interest rates, stockpiling commodities, clamping down on dissent, hacking everyone – but in the end, the irrefutable laws of economics must prevail. And so the Chinese government will have to atone for the massive inflation it unleashed in 2008, and for the equally disruptive misallocations of capital that are the hallmark of command economies.

While the blowup in China will wreak havoc in world markets, including many commodities, a bright side for gold investors is that the country's rising inflation should help keep the wind in the sails of monetary metal. It's no coincidence that the World Gold Council's latest data show investment demand for gold in China more than doubling in the first quarter of this year.

But there's a growing problem: An increasing number of people and institutions are coming to understand just how intractable the problems are. This has resulted in a steady move into tangible assets – gold, especially – that are not the obligation of any government. And it's not just individuals and money managers moving into gold, but central banks as well. That is an absolute sea change from the situation even a few years ago.

Meanwhile, with the Treasury unable to borrow since May, a backlog in government financing needs has built up. Which begs the question: With the Fed standing aside (for the moment), where is the government going to find all the buyers for the many billions of Dollars worth of Treasuries it needs to flog in order to keep the scam going?

If I were a conspiracy theorist, I might look at the sell-off in equities this week, triggered as it was by nothing specific, and see a gloved hand operating behind the curtain. After all, nothing like a good old-fashioned stampede out of equities to send billions chasing after "safe" Treasuries... which has been exactly the case this week.

Regardless, with the crossroads for hard choices now behind us, the global economy finds itself at the top of a long hill... with no brakes.

From here on, it will increasingly be every nation for itself – meaning a return to competitive currency devaluations and, in time, exchange and even trade controls.

And we will see a return of the Fed to the markets. On that topic, I will once again trot out a chart from an article by Bud Conrad that ran in The Casey Report a couple of years back.

I do so because it shows what I think is a very strong corollary between what occurred in Japan after its financial bubble burst and what is now going on here in the US (and elsewhere). As you can see, as a direct result of the Japanese central bank engaging in quantitative easing, the Japanese stock market bounced back strongly. But then, when the quantitative easing stopped, the market quickly gave back all its gains. 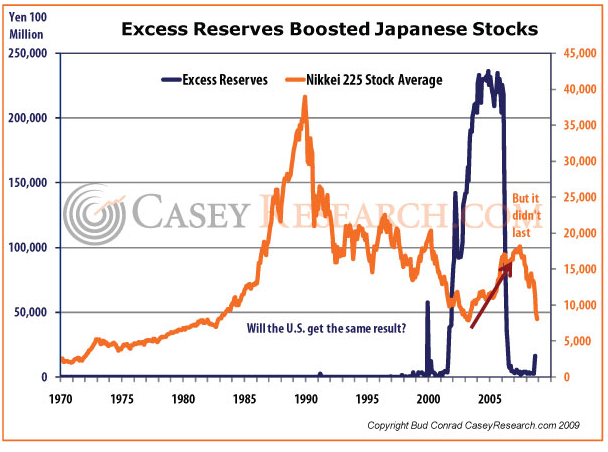 If I had the time and the resources to whip up a chart overlaying the quantitative easing here in the US of late versus the equity markets, I would. But I don't, and so will delve into that fount of all information – the Internet – and grab a chart constructed by someone else (in this case, Doug Oest, managing partner of Marquette Associates – thanks, Doug!)

As one can readily see, the Japanese experience is indeed a corollary to what's happened here, with QE pushing the stock market higher. Conversely, until the Fed comes back in, equities could be in for a rough ride. Likewise, when the Fed returns with the next round of QE, stocks could put in a very nice rally. 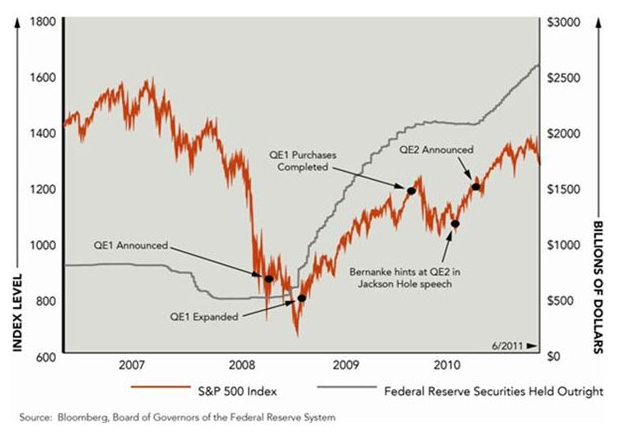 This role will only become more crucial as the world's desperate nation-states fire their currency cannons in the war to remain viable. The Fed's return to Treasury markets will be, in the rear-view mirror of future history, seen to be a seminal event – the beginning of the end of the current fiat monetary system.

Those good times are coming to an end.

Thinking of making a Gold Investment?...