END_OF_DOCUMENT_TOKEN_TO_BE_REPLACED

For stocks, that is. Apparently...

It would seem the one has nothing to do with the other.

What is Bitcoin's P/E ratio?

Is its corporate management on the ball?

It has no corporate management to speak of.

As well compare apple to orange...fish to fowl...or Paris, Texas, to Paris, France.

But according to the Wall Street Journal:

"Investors are latching onto Bitcoin as a new indicator for determining whether the stock market is headed for another downturn."

The stock market also set one record after next last year.

Then calamity came to Bitcoin in late December – and it's lost over half its value since.

Just over one month later the stock market came in for heavy weather of its own.

In consequence, adds the Journal:

"Some investors say the tandem moves suggest Bitcoin may be a barometer of investor sentiment that ultimately feeds into the stock market and other risky investments. If stocks are headed for another pullback, the thinking goes, Bitcoin may fall first – and harder."

When money flees the most speculative assets, it is a sign of waning confidence...with later consequences for the stock market.

This being the theory, anyway.

But the Journal refers to "some investors".

What about the professional money men?

Do they believe Bitcoin is a barometer of the stock market?

Evidently they do – some at least.

"We've begun to watch Bitcoin more closely as a sign of speculative enthusiasm."

Analyst Tom McClellan at McClellan Financial whipped up a chart revealing how the Dow Jones has trailed Bitcoin's performance.

Looking back to the autumn of 2016, he shifted Bitcoin's price action forward two months. Then he lined it up with the Dow. 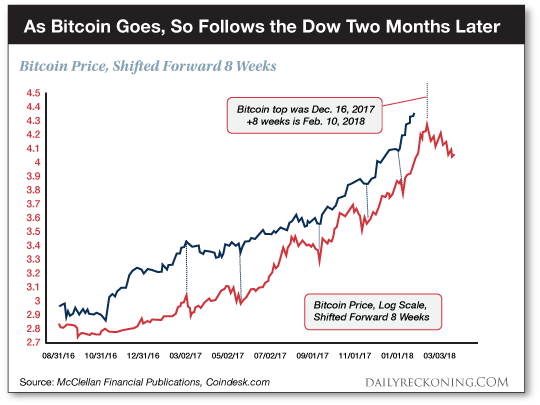 Bitcoin one month seems a fairly reliable indication of the Dow Jones two months later – if not perfectly, close enough for government employment.

As can be seen, the correlation tightens as 2017 rolls onward.

"The leading indication effect really did not start showing up until around February 2017, when the price was closing in on $1000. That seems to be when the big speculation frenzy in Bitcoin started, and thus when it began modeling the same sort of waxing and waning of interest people have in the stock market."

But does the theory hold?

Or are these folks chasing statistical phantoms, simply seeing faces in the passing clouds?

Recall that correlation is not causation.

"Ultimately," he says, "stock returns are grounded in the economy, corporate earnings, interest rates and inflation."

Bitcoin, on the other hand, runs largely on sentiment.

It has no earnings, for example. No P/E ratios.

What about their recent correlation?

Yes, both Bitcoin and stocks have lately experienced what those in the trade call sideways action – but for different reasons.

Stock markets are weighing the impacts of a possible trade war and additional interest rate hikes.

Meantime, Bitcoin grapples with the impact of SEC regulations and IRS threats to tax Bitcoin profits.

One – let the record show – has nothing to do with the other.

Their recent seemingly coordinated activity may be a mere shadow, a coincidence.

For now our jury sits in deliberation.

We don't know if Bitcoin provides an accurate premonition of the stock market one month later or two months later – or any time later.

After this latest action, Bitcoin is now down over 30% since clawing its way back above $11,500 last month.

Does that mean the stock market will be lower in two months?

We invite you to draw your own conclusions...