END_OF_DOCUMENT_TOKEN_TO_BE_REPLACED

So Beijing takes aim at Bitcoin as it almost matches the price of gold...

BITCOIN marked its eighth birthday last week with a wild, roller coaster ride that saw the crypto currency's price surge past $1100 and set a new record high before diving more than 20% in a matter of hours the following day, writes Gary Dorsch at Global Money Trends.

Yet, despite this flurry of activity in the virtual world, it's business as usual at "Bitcoin exchanges" that allow people to buy or sell Bitcoins using different currencies. 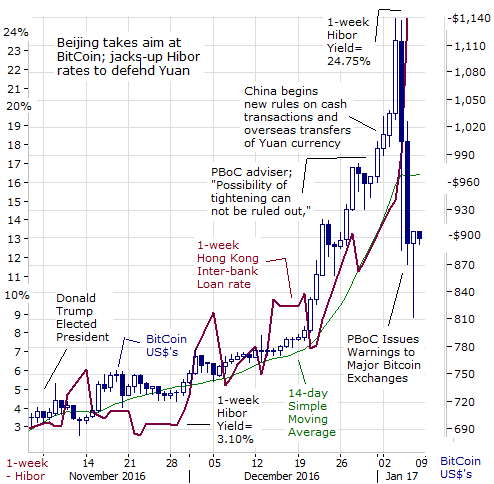 Bitcoin is a new currency that was created in 2009 by an unknown person using the alias Satoshi Nakamoto. Transactions are made with no middle men – meaning, no banks! There are no transaction fees and no need to give your real name.

More merchants are beginning to accept them. Bitcoins are stored in a "digital wallet", which exists either in the cloud or on a user's computer. The wallet is a kind of virtual bank account that allows users to send or receive Bitcoins, pay for goods or save their money. People can send Bitcoins to each other using mobile apps or their computers. It's similar to sending cash digitally. However, unlike bank accounts, Bitcoin wallets are not insured by the FDIC.

Bitcoin can be transferred and used to make payments anonymously without fees. The virtual currency transactions are recorded by a ledger (known as the block chain) which is run by so-called 'miners'. Today, the total value of the 16 million Bitcoins in the marketplace is about $15 billion, meaning its liquidity is still far too low to be considered a serious currency. For example, in China, the broad measure of the money supply, M2, now totals CNY153 trillion, ($22 trillion), and has increased five fold from CNY30 trillion at the start of 2006. And despite its rising price and profile, Bitcoin has rarely logged more than 300,000 transactions on any given day, significantly fewer than Croatia's national clearing system.

Still, Chinese traders, who make up 90% of the volume in Bitcoins, have turned to the alternative asset to hedge against the massive increase in the supply of the Yuan. By buying Bitcoin onshore, selling it offshore for another currency and then moving the money to a bank account, Chinese individuals can take cash out of the country. Utilizing Bitcoins to evade capital controls is happening on a global scale and is not unique to China.

Bitcoins are considered a borderless digital currency. They can be used for moving money across the globe quickly and anonymously, and operates outside the control of any central authority. That makes it attractive to those wanting to get around capital controls.

Outside China, India's and Venezuela's ban on some bank bills – plus uncertainty over political shocks such as Donald Trump's election and Brexit – have also boosted demand for Bitcoin, the supply of which is limited to 21 million by its original design. With regulators increasingly cracking down on cross-border flows, the appeal of using Bitcoin to obtain foreign exchange and take capital out of the country is increasing, especially for funds that may have been used in illegal operations such as money laundering.

Today, if you compare the rise in value of Bitcoin against the performance of the US Dollar versus the Chinese Yuan, you will see a clear correlation. It suggests that people want to get money out of China and they are using Bitcoin to do that.

The funneling of the Yuan through Bitcoin comes as the Chinese government and its regulators have in recent months moved to restrict the outflow of capital from their communist coffers. The Chinese government has imposed tighter restrictions on individual citizens, allowing them to move only $50,000 abroad each year, and has also limited the purchasing of insurance or real estate abroad. Now, with officials tightening capital controls, there's increased speculation that the digital asset will be the next target – even though the total value of Bitcoins is minuscule compared with other markets.

A dramatic rally in digital currency Bitcoin came to a spectacular end on Thursday, January 5th, with a plunge of up to -20% as China's Yuan rebounded +2.5% in the offshore spot and forward markets in Hong Kong, further evidence of an intriguing inverse relationship between the pair. Bitcoin had gained more than +40% in two weeks to hit a three-year high of $1140 on Wednesday, just shy of its all-time record of $1163 on the Europe-based Bitstamp exchange . But it dived as low as $885.41 on Thursday last week as the Yuan jumped by in offshore trading and headed for its strongest two-day performance on record.

The overnight borrowing rate for offshore Yuan broke records in Hong Kong, as liquidity tightened and the currency's short sellers rushed to square their short positions amid intensifying efforts by Beijing to defend the currency. The Hong Kong Monetary Authority's (HKMA) daily quota of CNY10 billion for the offshore Yuan market was quickly exhausted for a second consecutive day.

Hong Kong's overnight CNH Hibor, the official benchmark for inter-bank borrowing costs of offshore Yuan, reached as high as 112% during Thursday night trading, as the PBoC targeted offshore Yuan bears by pushing up the costs of shorting the currency. The PBoC's apparent intervention drove the offshore Yuan in Hong Kong to its best two-day rally ever, to an intra-day high of 6.7845 per US Dollar before it staged a turnaround, easing back down to 6.8401 on Friday morning last week.

But it was Bitcoin that yielded the biggest surprise of the year so far. The price of the digital currency went parabolic and rose to within $30 of the value of an ounce of gold, the traditional fallback hedge against fiat money misadventures, and the precious metal that has served as a medium of exchange for 5,000 years. And then it all went horribly wrong.

The price of a Bitcoin soared to $1140 on Thursday last week, before a violent selloff pushed prices to a low of $890 – a slide of 23%. The digital currency went from Bull market to Bear market in the space of about six hours!

Savvy Chinese are scrambling for the exits as Beijing attempts to choke off the outflow of capital beyond its border. On January 6th, officials from the PBoC met with representatives of major Bitcoin exchanges behind closed doors, to urge their compliance with "relevant laws and regulations." Representatives from BTCC, OKCoin and Huobi were all in attendance. Overall, the public statements aimed to serve as a reminder to citizens that Bitcoin doesn't have legal tender status.

"Bitcoin is not a currency and shouldn't be viewed as such. Those who invest in Bitcoin should accordingly be aware of the risks it poses and protect their investment," the PBoC warned.

Then it tried changing the composition of the currency basket to dilute the impact of the US Dollar. Then last week there were suggestions the government may order state-owned enterprises to temporarily repatriate US Dollars.

But it was that muscular display from the People's Bank of China that was Bitcoin's undoing, with the draining of all excessive liquidity in the tiny Hong Kong offshore markets.

While the PBOC may have won that battle, it's yet to be seen whether it can win the war against those fighting to push the Yuan lower. Goldman Sachs isn't convinced, forecasting the Yuan will fall to 7.3 against the US Dollar by the end of the year.

The problem is China is stuck in a vicious circle. As Beijing sells US T-bonds from its FX stash, it pushes up US-bond yields, and in turn, whets the appetite of Chinese yield hunters. In order to buy US bonds, Chinese investors have to sell Yuan. As the Yuan goes down, Beijing needs to sell some of its US bonds to keep the Yuan in check. That selling then lifts the yields on US T-bonds. Rinse and repeat.

Supporting the Yuan comes with an expensive price tag: Beijing's FX reserves have evaporated by $1 trillion from their peak. Beijing faces a wicked problem: either raise rates to bolster the currency but watch the local economy slow to less than +6% growth, or let the Yuan fall further, and suffer from the tweets and threats of tariffs from President Trump.

Good luck figuring that out.