END_OF_DOCUMENT_TOKEN_TO_BE_REPLACED

It's the bond market, stupid...
AS OUR 'Continuum chart' predicted over a year ago, Jerome Powell was called to his higher inflationary powers when the macro markets liquidated with great violence and terror, writes Gary Tanashian in his Notes from the Rabbit Hole.
Back in early 2020, that Continuum – the 30-year Treasury bond yield and its 100-month moving average – was begging for inflationary action from the US central bank.
"Oh Jerome? Bond market calling..." as we wrote at the time
Below is the Continuum today. And since that post in February 2020, a lot has happened and it has been according to the plans we laid out last spring.
The plan was inflationary because the Fed was going into steroidal inflation mode, as asked by the bond market. The 'Fed comfort box' on the chart has thinned out from the original post because the red dotted limiter (monthly EMA 100) has declined appreciably since then.
These many months the NFTRH target has been 2.5% to 2.7% on the 30-year Treasury yield. Last week that zone's lower bound got dinged. It is coming time for a cool down at least, if the macro reflation is going to get a second wind. What could provide that second wind?
A rally in long-term bonds that flies in the face of the now bearish herds, including the number #1 indicator to such a contrarian call – the BOND KING indicator, a tried and true contrary indicator right up there with the Cramer indicator and the Gartman indicator.
Incidentally, the Cramer indicator worked in real time as a short-term bull signal on March 5th 2021 and the Gartman indicator worked successfully as a bigger picture contrary indicator as the S&P 500 began tanking by 20% two months after his 2018 prediction for an "exaggerated and stunning rally" was bull horned by the media.
But the undisputed KING of bonds and contrary indications is Bill Gross, he of the 2011 'short the long bond!' call as the Continuum had not broken the limiter that has held it in check over decades.
That limiter has been the monthly EMA 100 and it has worked to contain the yield over decades, including the close call in late 2018 when Powell remained inexplicably hawkish despite tanking markets. We knew better, because we knew that the Fed was not going to incinerate itself in an inflationary bonfire with the yield rebelling as it was around 3.3%.
"But the 30yr could rise to 4% and still be historically low!" you say. I am not going to pretend to know the dynamics that have put this long-term structure in play, but the fact is that the EMA 100 has declined over decades and it has also contained the yield over decades. That's a pretty strong trend. 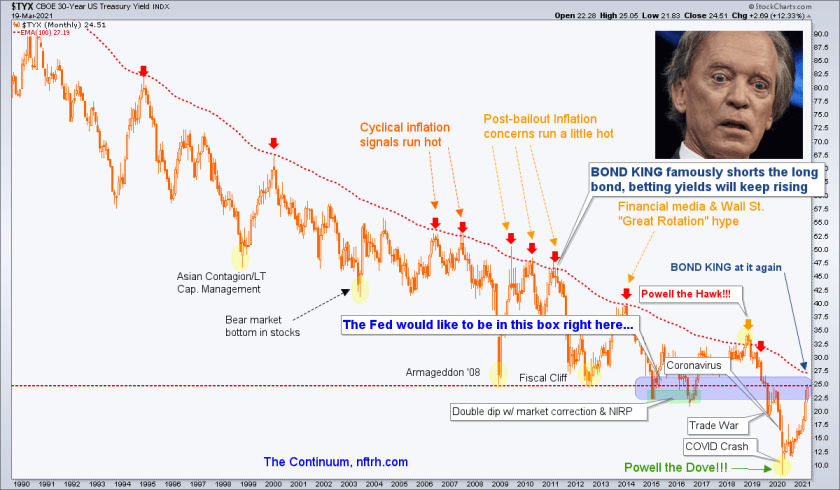 If that trend changes, it changes. But the implication would be an inflation problem unlike most of us have experienced before. Discussion in this post relates to the potential for a pause in inflationary pressures, not an end to them. Not yet, anyway.
A friend alerted me to this tweet by a Bloomberg reporter noting that Gross is shorting long-term bonds again and predicting breakout inflation. I don't want to minimize the inflation play, especially since we have been on it for a year now. But I do want to point out that with the lower bound of the Continuum's target zone hit and the BOND KING now put to us by the media, the time is right for an interim cool down.
Who could benefit? Well, there's the gold mining sector, which has logically and rightly been impaired by cyclical inflationary forces. Gold sentiment is registering an extreme on the Bleak-O-Meter.
That is the most obvious candidate, as it has been in correction since the herds began picking up on the inflation/reflation theme back in the summer. But there are others as well. Maybe Tech is not done, after all. The sexy (and over-valued) stuff has taken big hits lately and the story line has been that yields have been the culprit (well, that and sentiment begging to have the air let out of it).
If the macro does see a short-term easing of inflationary pressures or at least, long-term yields, don't count Tech out. If however, the ole' BOND KING happens to find his nut this time things will only get more extreme in the inflation/reflation trades. Extreme means 'risk of reversal' if our Continuum indicator above works on the bull/inflation end as it did on the bear/deflation end a year ago.
Ah, but the macro has another option at the ready. That would be the Stagflationary option. US manufacturing has been booming, with a big number from the Philly Fed being the latest example. 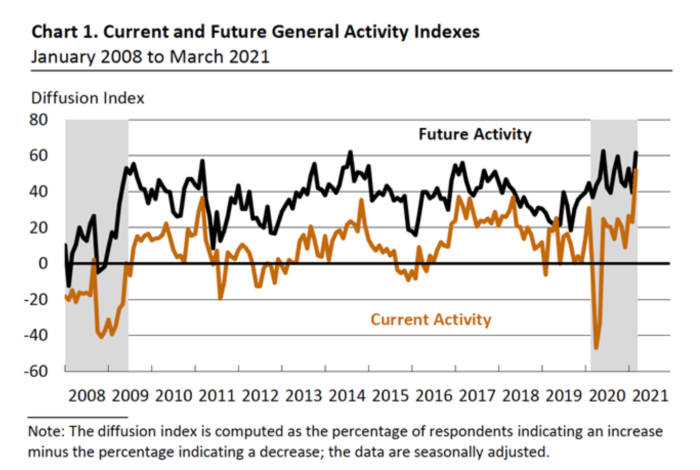 That's all well and good. But the prices manufacturers are paying for raw materials and equipment have just ramped to a post-2008 high. 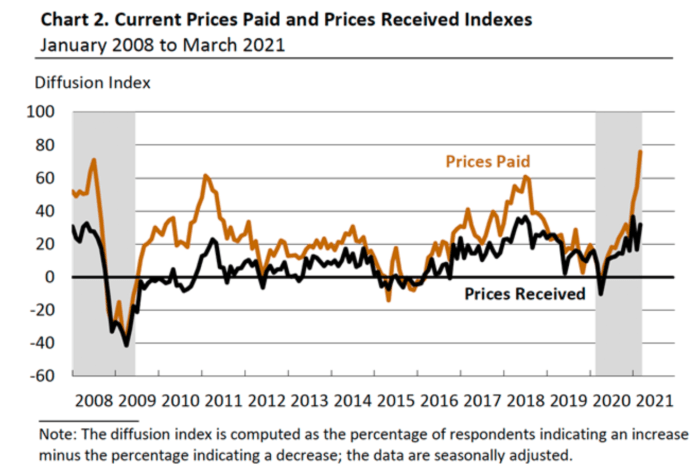 Regardless of any technical, sentiment and contrary indicator based analysis that may come into play in the short-term, a picture like the one directly above implies cost-push inflation. Manufacturers will be forced to push the rising costs they incur into the economy.
When that situation gets bad enough, whether at or below the Continuum's limiter or scarily enough, on a breakout above it, that is when the Stag is likely to make its entrance on the macro scene. It will either be that or another liquidation (mini or a Q4 2008 style maxi), which has been the trend for decades.
But with the inflation they've been wooing for the last year, I am not prepared to go on autopilot and quant the past to the future. Not this time. Best to take it as it comes, adjusting on the short-term using bonds/yields (among other indicators) as a guide, and planning for the long-term as well based on incoming information.
If a cooldown comes about but inflationary pressures resume the miners would go back to being "nothing special" (at best) as they have been since last summer. Someday, if the Stag wrecks the economy that could be a different story for the counter-cyclical gold mining sector.