END_OF_DOCUMENT_TOKEN_TO_BE_REPLACED

LAST WEEK investors shrugged off even more drama coming out of Washington, writes Frank Holmes at US Global Investors.

Stocks continued to rally and hit record highs, even as former FBI director James Comey testified that, in his opinion, President Donald Trump fired him in an attempt to lift the "cloud" of the Russia investigation.

If true, this suggests obstruction of justice, an impeachable offense. And if impeached, or in the event of a resignation, Trump's political agenda would likely be derailed. The last (and only) time a US president resigned, the Dow Jones Industrial Average lost up to 40%, as a recent article in TheStreet reminds us.

But markets paid no mind to Comey's insinuations, underscoring investors' confidence that tax reform and deregulation will proceed as planned. And sure enough, just hours after Comey testified, the House of Representatives voted to repeal key parts of the Dodd-Frank Wall Street Reform and Consumer Protection Act, which has contributed to an alarming number of small bank closures since its passage in 2010.

So once again, the wisdom of crowds prevails. If you remember, markets were forecasting as far back ago as last summer that Trump would win the November election.

This doesn't mean, however, that Trump's problems are behind him.

Last week I was speaking with Mike Ward, a top publisher with Agora Financial, who compared Presidents Trump and Ronald Reagan. It was suggested that, despite Trump's apparent affection for the 40th president, he has so far failed to live up to the Great Communicator's memory of optimism and deep respect for the office.

Whereas Reagan wanted to "tear down this wall," Trump wants to "put up that wall." Whereas Reagan insisted it was "morning in America," Trump insists it's "American carnage." Reagan succeeded in building coalitions and unifying our allies against the Soviet Union. Trump has already managed to destabilize many of those alliances.

Similarly, many observers are of the opinion that Trump is no Reagan.

Don't get me wrong. I remain hopeful. President Trump wants to make America great again, and it's still well within his power to do so – if he can practice some self-restraint and not get caught up in petty feuds. Voters support his vision. They gave him not only the Executive Branch but also Congress and most states' governorships and legislatures.

You could say I'm hoping for the best but preparing for the worst. I advise investors to do the same. No one can say what the future holds, and it's prudent to have a portion of your portfolio in gold, gold stocks and short-term, tax-free municipal bonds, all of which have a history of performing well in volatile times.

Following bitcoin's breathtaking ascent to fresh highs, gold rose to a seven-month high last week on safe-haven demand, stopping just short of the psychologically important $1300 level. Supported by Fear Trade factors such as geopolitical turmoil – both in the US and abroad – and low to negative government bond yields, gold's move here can be seen as a bullish sign.

As others have pointed out, the yellow metal breached the downward trend of the past six years, possibly pointing to further gains. 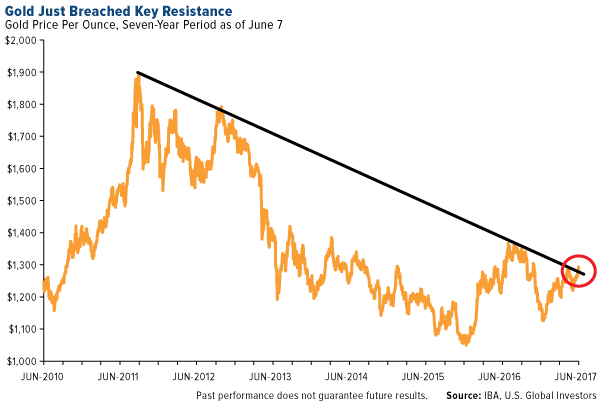 Under pressure from a beleaguered White House and stalled policy reform, the US Dollar continued to sink last week, with gold outperforming the greenback for the first time since the November election. Because gold is priced in Dollars, its value increases when the Dollar contracts. 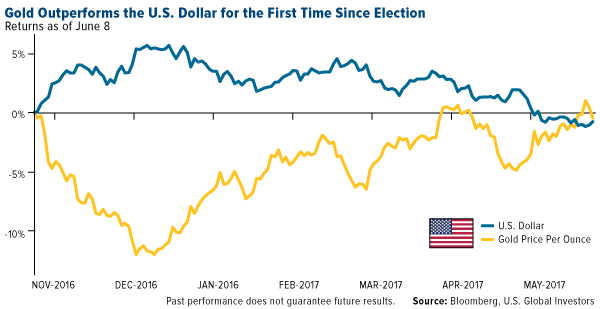 It's also important for investors to remember that gold has often rallied when Treasuries yielded little or nothing. Why would investors knowingly lock in guaranteed losses for the next two or five years, or near-zero returns for the next 10 years? That's precisely what Treasuries are offering, as you can see below: 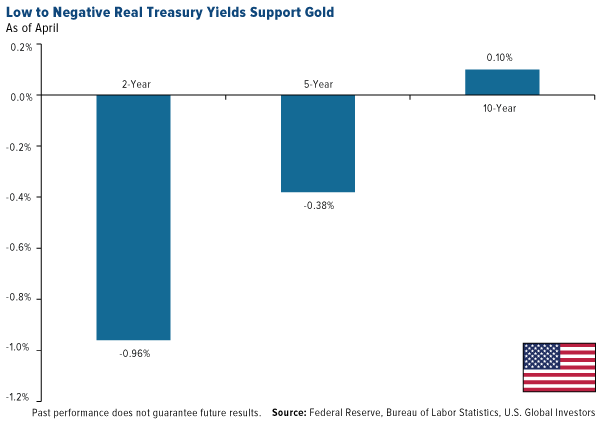 Minus inflation, the two-year Treasury yielded negative 0.96% in April; the five-year, negative 0.38%; and the 10-year, a paltry 0.10%. (I'm using April data as May inflation data aren't available at time of writing.)

When this happens, investors tend to shift into other safe-haven assets, including municipal bonds and gold.

Year-to-date, the yellow metal is up more than 9.7%, even as the stock market extends its rally. This runs counter to what we've seen in the past. As I've explained before, gold usually has a low correlation to other assets, including stocks and bonds, which is why investors all around the globe favor it as a diversifier.

One of the most compelling answers to this question, I believe, is that stocks appear to be overvalued right now, in turn boosting gold's safe-haven investment case. This is the assessment of Bill Gross, the legendary bond guru who currently manages $2 billion with Janus Henderson.

Speaking at the Bloomberg Invest New York summit last week, the 73-year-old Gross said markets are now at their highest risk levels since before the 2008 financial crisis. Loose monetary policy has artificially inflated stock prices despite weak economic growth, he said, adding: "Instead of buying low and selling high, you're buying high and crossing your fingers."

Marc Faber, the Swiss investor often referred to as Dr.Doom, echoed Gross' thoughts, telling CNBC last week that "everything" is in a bubble right now, similar to the days of the dotcom bust of the late 1990s. And when this bubble bursts, Marc said, investors could lose as much as half of their assets.

That stocks appear overvalued could be a driver of gold's performance right now, with savvy investors, anticipating a possible market correction, loading up on assets that have historically held their value in times of economic crisis.

At the same Bloomberg event, billionaire hedge fund manager Paul Singer – whose firm, Elliott Management, recently raised $5 billion in as little as 24 hours – warned attendees that the US was at risk of another debt shock.

Indeed, US debt levels are higher now than they've ever been, according to the Federal Reserve Bank of New York. In the first quarter of 2017, total US household indebtedness reached a mind-boggling $12.73 trillion. That's $150 billion more than the end of 2016 and $50 billion above the previous peak set in 2008. 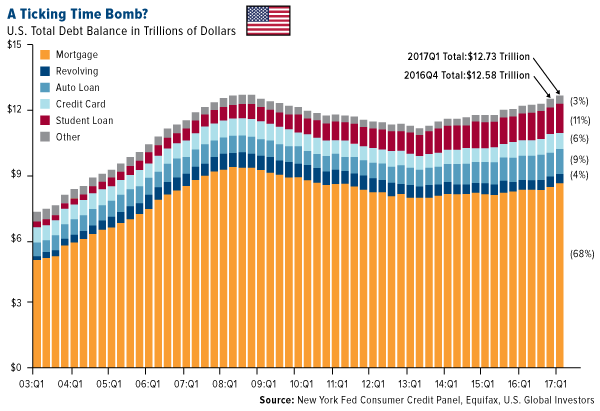 Even more concerning is the fact that the number of delinquencies grew for the second straight quarter as more income-strapped Americans binged on credit. We could be headed for a massive hangover.

Cumulatively, these warnings stress the importance of hoping for the best while planning for the worst. In the past, there have been few ways as effective at preserving wealth as gold, gold stocks and tax-free, short-term munis.