END_OF_DOCUMENT_TOKEN_TO_BE_REPLACED

NO, IT IS NOT April Fool's Day, says Dan Denning in Melbourne for the Daily Reckoning Australia.

Good on ya Ben! Even if Time did also call you the "most powerful nerd on the planet." But also beware the curse... 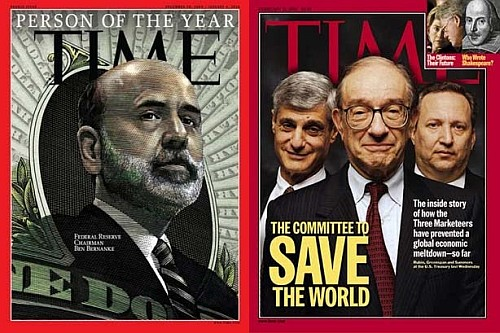 On February 15th 1999, Alan Greenspan, Larry Summers, and Robert Rubin made the cover of the same rag with the audacious tag, "The Committee to save the world...the inside story of how the Three Marketeers have prevented global economic meltdown...so far."

It turned out that "so far" would last about another year. As you can see from the chart below, the S&P 500 peaked in March of 2000, and then crashed. It wouldn't reach another new high until July of 2007 – right about the time a couple of leveraged funds from Bear Stearns stuffed to the gills with CDOs started to shake the financial system to its foundations.

The world doesn't look very saved, does it? Judging by this week's Fed statement, the world needs more saving yet again.

The Fed didn't change US Dollar rates from zero. Not yet. Nor did it say when it would remove its support for the housing market (via purchases of mortgage-backed securities) or when it would wind down its other programs that support the fragile state of credit in the American market.

Why not? Because the truth is the Fed can't remove that support yet – or the cost of housing finance would rise in the States. But it may rise anyway. The spread between the interest rate offered by two-year US Treasury bonds and 10-year bonds is widening, fast. Thirty-year mortgage rates in the US are tied to the 10-year note. Higher ten-year yields drive up new mortgage and mortgage refinance rates in the States.

Not that we're a bond sleuth, but we read in the Wall Street Journal earlier this week that the spread between 2-year notes and 30-year US bonds is as wide as it has been at any time since 1980. It's the yield curve. So what does it mean that the US yield curve is so steep?

We reckon it means that investors want to be paid more to lend money long-term. This means they fear inflation. They're happy to load into shorter-term notes and bonds. But loan the US government – a government Barack Obama says will go bankrupt if health care costs are not restrained – for 30 years? Fugeddaboutit!

Note that Obama did not say what Senator Barnaby Joyce has said, that America could default on its debt. You have to applaud the Senator for uncharacteristic candor, as far as politicians go. Technically, he's probably not quite correct though.

The US government sells debt in Dollars. It also prints Dollars. That means it can print new Dollars to pay off its debt. It needn't default, i.e. be unable to find currency to pay its creditors. If it were issuing debt in a foreign currency, say Yuan, then it would have to pay debt off in that currency and could default.

But perhaps we are quibbling over details. An inability to service its debt or pay off its long-term obligations, or just a willingness to do so by printing more money, is effectively a devaluation of the US Dollar. That's what the currency markets have been telling us all year. And that's one reason why the yield curve is starting to look like an Olympic ski jump.