END_OF_DOCUMENT_TOKEN_TO_BE_REPLACED

SO WHAT does marijuana have to do with Federal Reserve monetary policy? A lot, as it turns out. But it's not what you think, writes Eric Fry for the Daily Reckoning.

The connection has nothing to do with the idea that Fed chairman Ben Bernanke's wacky policies are the work of "somebody who must be smoking something." No, not that. In fact, we're pretty sure Ben isn't a pot smoker. We doubt he has ever inhaled anything more mind-bending than his Harvard education. And frankly, why would you bother with weed, when you've got access to Harvard's pharmaceutical-grade economic theories?

Sadly, the after-effects of sustained econ-theory abuse are usually irreversible. But that's a story for another day. Our story for today relates to the far-reaching and unintended consequences of a reckless monetary policy.

"By keeping interest rates artificially low," observes Marc Faber, editor of the Gloom, Boom & Doom Report, "[The Fed] has forced people to work longer, since they can no longer retire on the income from their savings. Between 1984 and 1999, the labor force participation rate for those aged 65 and older remained at about the same level, but has nearly doubled over the last ten years or so."

Meanwhile, the labor participation rate is plummeting for the youngest members of the workforce. Less than 35% of all 16- to 19-year olds are working today, compared to more than 50% one decade ago. So just maybe, Bernanke's super-low interest rates are doing more harm than good — both for the would-be retired old folks and the would-be-employed young folks. 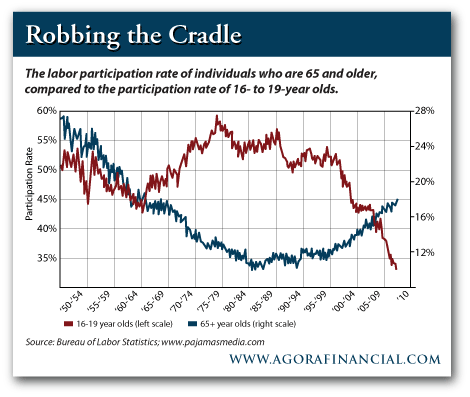 "More older people are working because they have to in light of lousy-to-nonexistent returns on CDs and bonds," www.pajamasmedia.com gripes. "If CDs were returning 5%, a lot more of them would be staying home."

So what's this fact got to do with marijuana? Well, it seems that a growing number of these retirement-impaired older folks are also moonlighting as marijuana dispensers. (We don't call them "dealers" here in California).

"At a time when many Americans are looking for any job they can get, medical marijuana is still proving to be a growing industry," CBS News reports.

According to the news report, eager job-seekers flocked to the West Coast Cannabis Expo in San Francisco last fall like hippies to the "Summer of Love." In fact, some of these job-seekers might be the same folks who danced in Golden Gate Park with flowers in their hair forty-two years ago.

"Most of the people coming to the classes," says Bob Calkin, CEO of CannaJobs, and of the Cannabis Career Institute, "are retired people or people from another line of work, or business that have either crashed, like the real-estate market or some other thing they're leaving and they want to try something new."

But Calkin is ready to lend a hand. Giving new meaning to the term "headhunter", Calkin is busy helping these retirees and housing-market refugees find employment in this exciting "growth industry."