END_OF_DOCUMENT_TOKEN_TO_BE_REPLACED

NOW that the statute of limitations has run out, writes Dave Gonigam in Addison Wiggin's Daily Reckoning, former Federal Reserve chief Ben Bernanke says bankers perhaps should have gone to jail for what they did before and during the Panic of '08.

As we warned reader last April, "The Bernank" is launching a book tour this week to tout his narcissistically titled The Courage to Act.

In an interview with USA Today, Bernanke muses about how the Justice Department pursued the banks, extracting cost-of-doing-business fines...but bankers themselves were untouched.

"Everything that went wrong or was illegal was done by some individual, not by an abstract firm," he said. (You'll have to imagine him wringing his hands as he said it. He did wring his hands, right?)

Bernanke himself is fortunate he was never subjected to a perp walk. He's known to have committed perjury at least twice.

Bernanke told Congress the bonds the Fed inherited in 2008 from the failure of Bear Stearns were investment-grade. Bloomberg News discovered in 2010 – only after filing a lawsuit – they were, in fact, junk

Bernanke also told Congress in February 2010, "We have no plans whatsoever to be involved in any foreign bailouts." In reality, Deutsche Bank and Credit Suisse topped the list of banks that dumped their crappy mortgage-backed securities on the Fed between 2007-09. 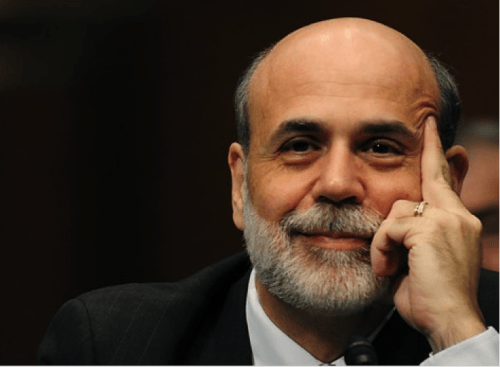 The picture never gets old, but it seems especially appropriate today.

And the charge-sheet above leaves out Bernanke's still-murky role in Bank of America's shotgun marriage with Merrill Lynch during the worst of the 2008 crisis. BofA CEO Ken Lewis failed to inform his shareholders at the time about Merrill's huge losses, as the law required. In 2009, Lewis said he withheld that information on orders from Treasury Secretary Hank Paulson, who was acting "at the request" of Ben Bernanke.

Will an interviewer bring that up during the book tour? We're not holding our breath.