END_OF_DOCUMENT_TOKEN_TO_BE_REPLACED

Look on the Fed's unlimited liquidity line as the world's biggest-ever "no doc" loan...

SO AFTER STOCKS in Europe and America soared overnight, the Dow Jones on Wall Street enjoyed its fourth-highest percentage gain ever of 12%, writes Dan Denning of The Daily Reckoning Australia.

With a stiff right jab, governments everywhere have stepped forward with plans to buy equity and inject capital into tottering banks and financial stocks. It's a direct capital infusion designed to save the banks.

Such direct government ownership of the banks gives the stock market the impression that corner has been turned in the financial crisis. But this doesn't mean stocks are out of trouble. They still have to factor in a recession – or how badly the financial crisis has already bled over into the real economy.

Still, shares seem to think that the worst of the financial crisis is over. There is every reason to doubt, however, that nationalization of the banking sector will work. It does nothing to arrest falling global residential real estate problems, the core of the rot in the system.

Good, bad, or otherwise, the market is clearly treating this as a turnaround point. But don't forget the second punch the authorities landed...the true haymaker.

In an announcement released at two in the morning in New York, the Fed announced that along with other central banks it would be providing unlimited liquidity to anyone who wanted it, more or less.

Specifically, the Fed said that participants to its new lending program "will be able to borrow any amount they wish against the appropriate collateral in each jurisdiction." This is like a giant no-money down loan to the entire global financial system. It's a classic "no doc" loan too, right in the mold of California's shabbiest home loans from the 2006 vintage.

If the Fed building could talk, you can imagine it saying, "If you don't think we can fight debt deflation with credit creation, watch this." But in poker terms, the Fed is not yet "all in". That would be direct purchases by the central bank of stocks, bonds, CDOs and houses. But this is still a giant gamble that it can turn the tide in the markets by making unlimited funds available to practically anyone who wants them, provided you have a pulse and a bank account.

Or in this case, the whole bank branch network.

This kind of lending is no different in principle from the no-doc lending that fuelled the mortgage bubble boom. You know, the one that preceded the house price crash. At least with housing, the loans were secured with an actual asset, the house itself. Here, the massive program to expand government lending will accept any sort of collateral, or even none at all.

It is, in effect, a giant bet by the backers of fiat money that investors prefer inflation to insolvency. Because let's face it, unlimited liquidity does nothing to improve the solvency of troubled financial firms. Liquidity is not wealth. Not even money is wealth.

The Fed and its gang of central bankers have unleashed the "inflationary holocaust" that Jim Rogers warned of earlier this weekend. They are going to try and beat a deflationary depression with an enormous and unprecedented expansion in direct government lending and outright purchases of securities. Will it work?

They will not succeed at reinflating the housing bubble, we believe. But all the new money will have to go somewhere. We reckon that investors who can read the tea leaves will get back into deeply oversold energy and resource stocks as inflation hedges. These stocks represent good fundamental value. They're technically attractive. And the inflation created by the unlimited borrowing facility should be impressive.

All told, it's an historic moment. The Fed must think it has achieved what its counterparts in the Great Depression of the 1930s did not: Preventing the transmission of the crisis from the financial markets to the real economy.

True, consumer sentiment has already been affected. House prices are still falling. Spending will slow. But by quarantining the banking sector and injecting new capital into it, the authorities hope the financial crisis will have ended with the steep falls in share markets – and not translate into a fundamental contraction in global economic activity.

The stock market will ultimately decide how bad it thinks the economy will be in the next year. The optimistic view is that it has decided already, and stocks are clear to rally from here. But keep in mind, earnings analysts have yet to downgrade their expectations for the next two quarters. When they do, shares could head lower.

In fact, we believe the market (both here in Australia and in the United States) will eventually test the 2003 lows. But it may not happen just yet. Meantime, please remember what the job of the bear market is. His aim is to destroy your capital. But he can only do so if you're willing to stay in the market and keep your capital at risk.

In the last week, fear and panic were so prevalent that there were no buyers in the market. Capital fled, indices fell and the marketplace was deserted of bulls. The bear's job now is to sucker you back in, to make you think the worst is over and that this is a rally you can't afford to miss. He does that by giving you a rally that seems convincing...a rally you can't resist. But take a look at the two charts below. 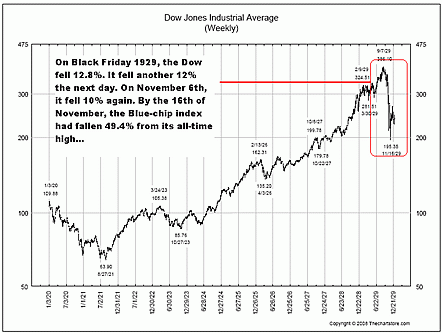 No, it didn't make a new high. But the price action was surely enough to sucker many investors back in, believing the worst was over. It wasn't. 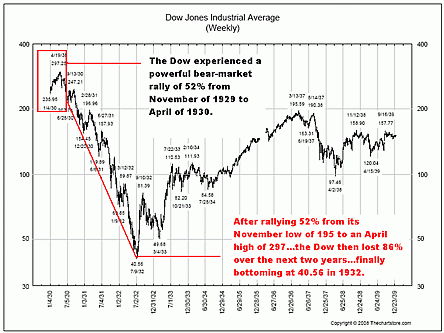 Over the next two years, stocks fully priced in the debt deflation in the economy and fell 86%.

This is precisely the scenario the Fed wants to prevent. It's willing to risk a hyperinflationary melt-up in order to avoid prolonged debt deflation. We just don't know, historically, what the result will be.