END_OF_DOCUMENT_TOKEN_TO_BE_REPLACED

Hard to believe in this heat...

WE COULD be witnessing a cyclical reversal in the leadership of the stock market, writes Dan Denning, co-author of The Bill Bonner Letter.

I'm talking about a rotation out of "growth" stocks and back into "value" stocks.

On Wall Street, a growth stock is typically defined as a stock that's growing earnings at a rate significantly higher than the market average. Investors are willing to pay more for future earnings now and forgo dividends because they see higher earnings – plus, higher stock prices – ahead.

Growth does seem like a nice alternative to which stocks will win and lose if the trade wars escalate...or if the yield curve inverts as the Fed raises rates. But it's not that simple. You still have to find "value."

What constitutes "value"? My colleague Chris Mayer would have a more precise definition. But from an internal stock market point of view, value isn't so much future earnings, but how cheaply you can buy present cash flows.

For example, a value stock may have lower revenue growth. But it can also provide you with stable, consistent income in the form of dividend payments.

In recent years, growth has been in vogue. Value, not so much...

The below chart puts that into perspective. 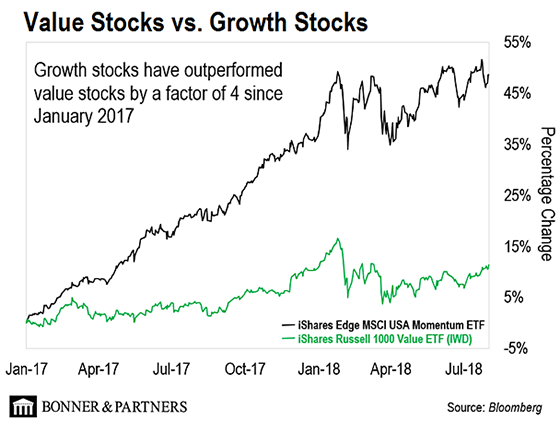 Compare it to the green line that tracks the performance of the iShares Russell 1000 Value ETF (IWD), which is loaded up with so-called value stocks like JPMorgan Chase and ExxonMobil.

As you can see, growth stocks have climbed 49% in the past 18 months. Compare that with the "value" ETF, which has climbed only 11% over the same time.

In July of this year, growth stocks took a hit. MTUM fell 4% in the wake of disappointing earnings reports from the darlings of this bull market: Facebook, Netflix, and Twitter. At the same time, IWD picked up 2%.

The popular narrative – which is the one you'll hear on CNBC because it keeps you asking what to buy instead of deciding to sell – is that the market will "rotate." Capital will begin flowing out of one sector and into another...in this case, from growth into value.

That's entirely possible. The bull market would age, slow down, lose a step or two, and stop for longer lunches.

But in another few days, it will be the longest bull market on record, anyway. Why not rotate out of growth and into value like everyone else and enjoy the ride?

That would be a big mistake – and a wasted opportunity to take some profits from the bull and strengthen your portfolio against the coming bear market.

In the dying stages of a bull market, the financial press is full of stories about what you should buy now, especially if tech isn't leading the market. But one of the points I've made in the last six months is that sometimes, you shouldn't buy anything in the stock market.

As Joe Withrow showed on Saturday, stocks are more expensive, relative to historical earnings, than at any other time in the last 10 years.

That suggests that, no matter where you hide, future returns will be much lower than what you've grown accustomed to over the past 10 years. History bears this out, for anyone who bothers to read it.

One of the single best predictors of low returns ahead is a period of high returns prior. And when expectations are high – now that Apple has become the first company with a $1 trillion market cap, headline writers are talking about the first $2 trillion firm – future returns tend to be low.

It's part stock market cycles, part human nature, and fully the combination of the two on market action and prices. Now is one of those times where it's more important to protect the wealth you already have than to put yourself on the line for a few more percentage points.