END_OF_DOCUMENT_TOKEN_TO_BE_REPLACED

The CAPE ratio of US equity values is near all-time highs...

SO NEWS is the US manufacturing sector shrank for the fifth month in a row in December, writes Bill Bonner in his Diary of a Rogue Economist.

We could add that it is now back to levels last seen in July 2009 – in the immediate aftermath of the global financial crisis.

We could mention, too, that the Baltic Dry Index – which tracks the cost of shipping raw materials by sea – just hit a record low.

We've been citing many other fundamental indicators all pointing the same way – toward a weakening global economy.

Why, then, are stocks – which are supposed to look ahead – still telling us that the coast is clear?

Neither was enough to cause alarm. And after a rough start last week, the mainstream press reports that prices "stabilized".

But according to Nobel prize-winning economist Robert Shiller, US stocks have almost never been so expensive.

His cyclically adjusted price-earnings ratio – or CAPE ratio – looks at the relationship between share prices and the average inflation-adjusted earnings from the previous 10 years.

This controls for – or "smoothes" – year-to-year swings in corporate earnings, which can be highly volatile. As a result, Shiller says, it gives a more accurate picture of what kind of value is on offer. 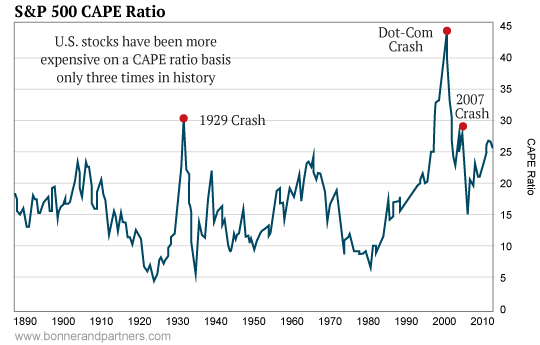 The CAPE ratio is near all-time highs

But wait. The story is a little more complicated.

The Dow and the S&P 500 have been buoyed up by the performance of a few companies that have done very well.

These four tech darlings have been running wild – reminding us of the dot-com craze of the late 1990s. And all (bar Alphabet) trade at price-to-earnings ratios of more than 100.

But if you look beyond the major indexes, you don't see stocks running wild...you see them running for cover.

In fact, it looks as though a "stealth" bear market has already begun.

For example, the median stock in the Russell 3000 – a broad measure of the US stock market – has fallen 20% since hitting its 52-week high.

That should ring some bells. A 20% fall from a 52-week high is a standard definition of a bear market.

What is going on?

Dr.John Hussman of Hussman Funds speaks for us:

"I remain convinced that the US financial markets, particularly equities and low-grade debt, are in a late-stage top formation of the third speculative bubble in 15 years.

"On the basis of the valuation measures most strongly correlated with subsequent market returns (and that havefully retained that correlation even across recent market cycles), current extremes imply 40-55% market losses over the completion of the current market cycle, with zero nominal and negative real total returns for the S&P 500 on a 10-to-12-year horizon.

"These are not worst-case scenarios, but run-of-the-mill expectations."

Now we will speak for ourselves: We recall that in 2000 – the same year we suggested shifting out of US stocks – Warren Buffett looked ahead. And he saw a "Lost Decade" coming for the US stock market.

Stock prices had gotten so high relative to GDP that he reckoned it was unlikely that we would see a positive return over the next 10 years.

He was right. Stocks went up until 2007...and then crashed down again, ending the decade lower than where they began it. Investors lost money.

"The risk cycle has already turned, and the familiar canaries in the coalmine – market internals and credit spreads – have been deteriorating persistently, in the same way that deteriorating internals and subprime defaults were the first warning signs to emerge in 2007...the consequences of years of distorted capital flows and yield-seeking are already unfolding."

Our proprietary stock market indicator, based on research by former ValueLine analyst Stephen Jones, shows much the same thing: losses for US stock market investors as far as the eye can see.

Unless, that is, you can see further than 10 years ahead.

Until then, our indicator predicts lower US stock prices, as the equity market adjusts to high current prices, over-regulation, a crushing debt load, misallocation of resources, and aging populations.

But if you check your broker statement in 2025...and find you have only half as much real wealth as you have today...remember: We warned you.

If, on the other hand, you make a lot of money by ignoring us...please forget we said anything.