END_OF_DOCUMENT_TOKEN_TO_BE_REPLACED

Not only do calls for more banking regulation miss the point, such measures could well be counterproductive...

ONE INTERPRETATION of the financial crisis that you often hear is that it was all down to unregulated or under-regulated financial institutions and markets. As a result, one of the most commonly advanced solutions is for more and/or better regulation, writes John Phelan for the Cobden Centre.

Indeed, this call is about as close as we get to a firm demand from the presently fashionable 'occupy' protests.

There are many things wrong with this view. First, the underlying causes of the recent boom and bust could be found, as so often, in monetary disturbances. In comparison to the damage wrought by a deluge of credit, any regulatory deficiencies are just hundreds and thousands atop a cake that was always going to turn out pretty sour.

Secondly, nothing says 'profit opportunity' to financial institutions quite like some new financial regulation. To give just one of countless examples, the EuroDollar market sprang into life thanks to attempts like Regulation Q to impose limits on interest rates. The financial innovators will only ever be one step behind the regulators for as long as it takes them to read the regulation. Then they streak ahead.

And thirdly, it is a mistake to think that financial markets were notably under-regulated. After redesigning British financial regulation almost from scratch, the Labour government never ceased tinkering with it. As Terry Arthur and Philip Booth wrote recently:

"To obtain permission to carry out regulated activities an organisation must meet certain qualifying conditions. These include having adequate resources (financial resources as well as internal systems and procedures). The conditions are laid out in the FSA's Integrated Handbook…Regulation is bureaucratic in the extreme. It is no longer possible to determine the number of pages in the handbook, but an indication is given by the following example. There are ten main sections in the book. One of those main sections…is that on 'Listing, prospectus and disclosure'. This contains three subsections which have between nine and 23 sub-subsections each. Taking one of those sub-subsections, under the 'Listing rules', there are six sub-sub-subsections."

Fortunately we can look at the economic impact of regulation worldwide with the release by the International Finance Corporation of the World Bank of its annual 'Doing Business' report which compares regulatory environments and the ease of doing business across countries. The reports message is unequivocal; regulation is mostly bad and those calling for more of it are calling for economic suicide.

"A typical company in Congo with a gross profit margin of 20% faces a tax bill equivalent to 340% of profits…How long, for example, does it take to register a company? In New Zealand it takes one day and costs 0.4% of the local annual income per head. In Congo it takes 65 days, involves ten steps and costs 551% of income per head…Other procedures the IFC measures include registering a property (which takes one day in Portugal, 513 in Kiribati); obtaining a construction permit (five steps in Denmark, 51 in Russia); enforcing a simple contract through the courts (150 days in Singapore, 1,420 in India); and winding up an insolvent firm (creditors in Japan recover 92.7 cents on the Dollar, those in Chad get nothing at all)…A young entrepreneur in Liberia who builds a new warehouse must wait on average 586 days to connect it to the power grid. In Ukraine it takes 274 days; in Germany only 17. Guess which of these countries has a thriving manufacturing sector?"

The chart below illustrates the point: 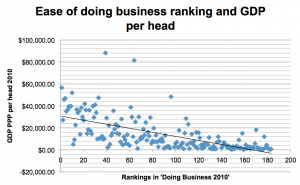 We see that while a light regulatory environment is not a guarantee of wealth, it is a necessary precondition. Not surprisingly, The Economist sees a causal relationship:

"Cutting red tape makes countries richer, if the 873 peer-reviewed articles and 2,332 working papers that use the "Doing Business" data are anything to go by. A study in Mexico found that simplified municipal licensing led to a 5% increase in the number of registered companies and a 2.2% increase in jobs. It also lowered prices for consumers. Bankruptcy reform in Brazil caused the cost of credit to fall by 22%. Countries with flexible labour rules saw real output rise by 17.8% more than those with rigid ones"