END_OF_DOCUMENT_TOKEN_TO_BE_REPLACED

A MAJOR theme in Bank of England speeches over the last three years has been the 'Ten Times' story, says Kevin Dowd – Professor of Finance & Economics in the Business School at the University of Durham – writing at the Cobden Centre for Monetary Reform.

Bank capital requirements are now 10 times higher than what they were at or before the time of the GFC.

Here are some examples:

"Capital requirements for banks are much higher ...In all, new capital requirements are at least seven times the pre-crisis standards for most banks. For globally systemic banks, they are more than ten times." (Mark Carney, 2014)

" ...the capital requirements of our largest banks are now ten times higher than before the crisis." (Mark Carney, 2015)

"The largest banks are required to have as much as ten times more of the highest quality capital than before the crisis ...(Mark Carney, 2017)

This latter claim is particularly significant because Governor Carney is referring to the largest banks in the world and was writing in his capacity as chairman of the Financial Stability Board (ie, as the world's most senior financial regulator) to the leaders of the G20 countries. He could hardly have chosen a more conspicuous forum in which to make his point.

At first sight, these claims are very reassuring. After all, if bank capital requirements are now ten times greater than they were before the GFC, that must mean that our banks are now much more resilient, right?

The evidence for Governor Carney's claims would appear to be the capital requirements in the following Table (Table B.2) from the Bank's July 2016 Financial Stability Report:

[STRONG]Notes to Table B.2:[END STRONG]
(a) Expressed as a proportion of risk-weighted assets. An additional 1.5% of risk-weighted assets must be held in at AT1 [Additional Tier 1 capital] as part of the Basel III Pillar 1 requirement. UK banks are also subject to Pillar 2A requirements.
(b) See Caruana, J. (2012) 'Building a resilient financial system', available at www.bis.org/speeches/sp120208.pdf
(c) in a standard environment.

This Table indicates that the minimum Basel II core Tier 1 (CT1) capital requirement was 1% using Basel III definitions. The lines below show the additional requirements for the ratio of Common Equity Tier 1 (CET1) capital to Risk-Weighted Assets (RWAs), which sum to 9 to 11.5% depending on the settings for the systemic and countercyclical capital buffers.

The systemic buffer is likely to have an impact of no more than 0.5% of RWAs, however. As for the countercyclical buffer, the Bank of England announced on June 27th that this buffer would be raised from 0% to 0.5%. Therefore the actual value of the 'Basel III CET1 minimum with buffers' term at the bottom of the table should be no more than 8%, but let's call it 8% to be on the generous side.

At first sight, such an increase in capital requirements might appear impressive. But consider the starting base.

Applying this ratio, total assets might have been 100 ÷ 35% = 285.7 times capital: banks could be leveraged by a factor not far short of 300 under the old rules. Given that UK bank CET1 ratio capital requirements are currently 8 times what they were before the crisis, current requirements would still allow banks to be leveraged by a factor of 285.7 ÷ 8 = 35.7. This is a high level of leverage, and high leverage was a major contributor to the severity of the crisis. And I have not taken account of how UK banks could increase their leverage further by switching into assets with lower risk weights or by moving positions from their banking books to their trading books.

And why was the base so low? Because Basel II imposed extremely low minimum capital requirements. Correctly interpreted, Governor Carney's '10 times' narrative (or to use the more accurate figure, an '8 times' narrative) does not imply that banks now face high capital requirements; it is, instead, a damning indictment of the inadequacy of Basel II.

Therefore, one can say that when it comes to the leverage ratio, the Basel III requirements are not 8 times or 10 times or even 20 times what they were: they are infinitely greater than what they were. Even so, they are still too low.

It is not for nothing that Martin Wolf has described Basel III as the mouse that did not roar.

Slinging around multiples of capital ratios is great fun, but there is a serious side too. The question one must ask is why does the Bank choose to emphasise this 10 times narrative to make their point that UK banks are now strong again, when the underlying facts on the ground – the empirical leverage ratios (see here or here) – do not support that narrative.

To illustrate, consider the following chart (Chart B.2) from the BoE's November 2016 Financial Stability Report: 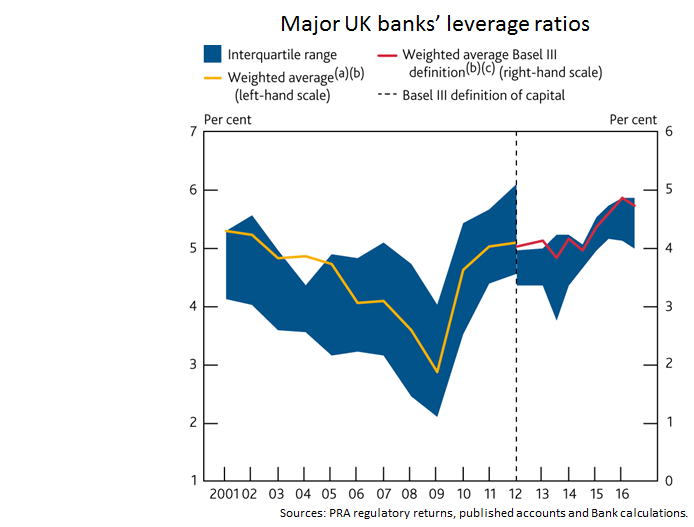 The Bank explains its chart thus:

The chart shows that in terms of actual capital-to-asset ratios, we are roughly back to 2002 levels and about 1.5 (not ten) times higher than 2006-7, the eve of the crisis. And these are book-value figures. In terms of market values, the Bank of England's own data suggest that UK banks' capital ratios are well below what they on the eve of the crisis.

Ten times capital requirements or no, UK banks are still far from resilient. One can only hope that they will not have to go through another major stress any time soon.