END_OF_DOCUMENT_TOKEN_TO_BE_REPLACED

New BoE governor Carney copies the US Fed strategy as QE stays on hold...
MERVYN KING, who sat in the Bank of England governor's chair for 10-years, became addicted to the hallucinogenic QE drug in the latter half of his reign, writes Gary Dorsch at Global Money Trends.
For six straight months, King joined with his fellow BoE board mates, Paul Fisher and David Miles in pleading for a resumption of QE after its was mothballed in November 2012. King argued in favor of a modest resumption of new QE injections, at £25 billion per month, but was outvoted each time by a sizeable margin of 6-to-3, including on his final policy meeting on June 19th.
The six other members of the Bank of England's monetary committee had kicked the QE habit, and voted to freeze QE at £375 billion. The BoE rebels refused to sink deeper into the QE-quagmire, warning that it could further inflame the scourge of inflation, and could further inflate speculative bubbles in the equity markets.

"Monetary policy is already exceptionally accommodative, and further Gilt purchases could contribute to an unwarranted narrowing in risk premia and complicate the transition to a more normal monetary stance at some point in the future," the June 19 minutes showed.

Furthermore, the more responsible members noted that Britain's consumer inflation rate has held above the central bank's target of +2% for most of the past five years. 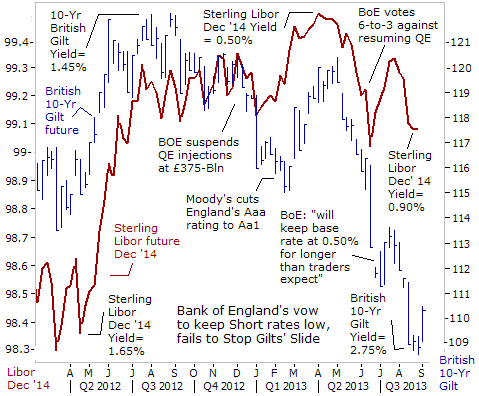 Sensing the stiff resistance from the BoE rebels, the new incoming chief, Mark Carney, decided to follow the playbook of the Federal Reserve, and signaled on July 4th that the Bank would try its hand at "forward guidance" instead.
The BoE pledged to keep the bank's base lending rate locked at a record low of 0.50% for longer than London futures traders had expected. "The implied rise in the expected future path of bank rate is not warranted by the recent developments in the domestic economy," the BoE said in a statement.
The Bank of England was referring to the longer-dated Sterling Libor futures contracts that are building up expectations of a base rate hike to 1% before December 2014. Yet despite the BoE's gambit with "forward guidance", it has gained very little traction to date. Today, the Sterling Libor futures contract for Dec '14 delivery is yielding 0.90%, signaling a 100% chance of a quarter-point rate to 0.75% within the next sixteen months, and a better than even chance of a half-point rate hike to 1% by the end of 2014.
The downturn in British Gilt prices also continues despite the BoE's trickery. Since May 1st, ten-year Gilt futures prices have tumbled 10%, lifting their yield to as high as 2.75%, before futures prices stabilized on short covering.
Most worrisome, the yield on the British 10-year Gilt is surging higher, even though the UK economy is still skating on thin ice. The UK economy is buffeted by the troubles on the Continent – Britain's largest export market, and fiscal austerity at home. George Osborne, the Chancellor of the Exchequer, has doubled down on his effort to rein-in the UK-budget deficit, in reaction to Moody's decision to strip the UK of its coveted Aaa credit rating in Feb '13, and cutting it to Aa1.
On June 26th Osborne announced £11.5 billion of new spending cuts in the2015/16 fiscal year, including more public sector job cuts. 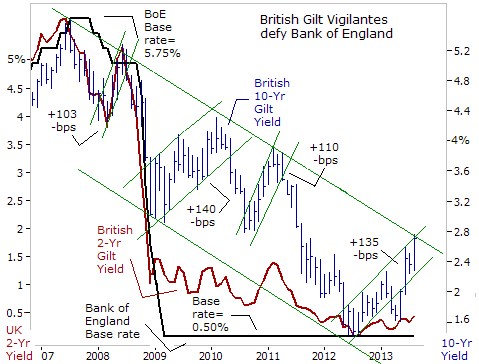 Inflation is running at a 2.9% clip in the UK, while workers' wages saw one of the largest falls in the European Union during the economic downturn.
The figures, collated by the House of Commons library, show average hourly wages in the UK have fallen 5.5% since mid-2010, adjusted for inflation. That is the fourth-worst decline among the 27 EU nations, and the biggest drop since 1987. By contrast, German hourly wages rose 2.7% over the same period. Other countries also fared better than the UK. Spain had a 3.3% drop and salaries in Cyprus fell by 3%. French workers saw a 0.4% increase.
Desperate to cap the upward surge in Gilt yields at the downward sloping trend-line residing at 2.75%, the Bank of England broke with tradition and adopted a de-facto dual mandate. On August 7th the Bank unveiled a near carbon copy of the US Fed's forward guidance scheme. It pledged to keep its base lending rate locked at a record low of 0.50% until the jobless rate falls to 7% or below, which it said could take three years.
However, the gimmickry didn't dupe British Gilt traders, who don't believe the Bank of England can keep its foot on the stimulus pedal for another three years without elevating the UK's already high inflation to an even higher plateau. That challenge was made all the more difficult, when BoE member Martin Weale voted against the forward guidance scheme, saying it risks fueling a higher rate of inflation.
Another Bank of England member, Andrew Haldane, told the Treasury Select Committee in June that the biggest risk to financial stability would be a spike in G7 bond yields should the bond bubble burst.

"If I were to single out what for me would be the biggest risk to global financial stability right now, it would be a disorderly reversion in government bond yields globally. We've seen shades of that over the last two to three weeks. We have intentionally blown the biggest government bond bubble in history. We've been vigilant to the consequences of that bubble deflating more quickly than we might otherwise have wanted. That's a risk we need to be very vigilant to."

The idea of trying to lure fixed-income investors into purchasing long term T-bonds, by vowing to keep short-term rates low for an extended period of time, is a desperate gambit that's fraught with great danger. On June 2nd, the chief economist of the BIS – Stephen Cecchetti explained in a conference call:

"While there would always be uncertainty over the correct level of interest rates, it is not normal that official interest rates should be near zero, and that markets should be effectively penalizing investors for holding longer-term debt. Yields will go up, as the economic recovery takes hold, but the ride to normality will almost surely be bumpy, with yields going through both calm and volatile periods, as markets price in sometimes conflicting news."

Prices and yields move inversely to one another, so a generalized rise in bond yields can result in sharp losses, at least on paper. Mr. Cecchetti warned that the scale of such losses could be greater than ever before, owing the explosion of government debt in most developed markets.
The forward guidance gimmick put forth by the BoE and the Fed shouldn't fool fixed income investors into buying long-dated T-bonds. Instead, the scheme might backfire, by fueling bubbles in the local stock markets, and further inflame the bearish sentiment that's raging in UK-Gilts and US T-Notes.
The British Gilt market typically tracks the direction of US T-Notes. So if the Fed begins to whittle down QE-3 to about $55 billion per month by December, as expected, it could deal further pain to bond holders and lift British and US bond yields higher in the months ahead. On the other hand, if the long awaited tapering of QE-3 triggers the long awaited correction in the British and US stock markets, resulting in sustained equity losses of 10% or more – the loss of a few trillion Dollars of wealth in the stock markets could be more effective at capping bond yields, than the gimmickry of forward guidance.