END_OF_DOCUMENT_TOKEN_TO_BE_REPLACED

THERE may come a time, sooner than you think, when the world economy simply cannot operate to its full potential without Bitcoin, Facebook's proposed Libra or some other large-scale digital currency, reckons Frank Holmes at US Global Investors.

Consider what's happening in the US alone...

Regional banks are closing at a rapid rate, creating so-called "banking deserts". Meanwhile, the number of financial advisory and wealth management firms is shrinking due to constricting regulations and increased consolidation.

These trends should be alarming to anyone reading this because it means that more and more Americans may find it hard to get access to basic financial services. According to the Federal Reserve Bank of Atlanta, "maximizing the number of Americans who use conventional financial services is essential to the well-being of not only those individuals and households but also the broader economy."

Even getting ahold of physical cash has become more challenging for some people. Since the peak in 2009, the number of bank branches in the US has plummeted about 11.5%, due in large part to rising costs per square foot. There doesn't seem to be a slowdown in sight.

Last year set a new record, in fact. Net bank branch closures totaled 1,947 in 2018, or nearly 800 more than were shuttered only six years earlier. "Hundreds of banks have sold off in recent years due to rising compliance costs and a more competitive landscape, among other factors," says S&P Global. 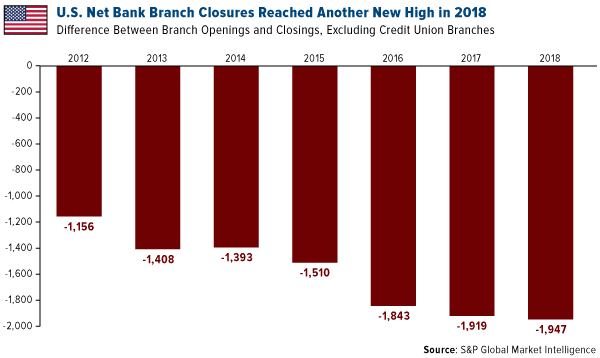 According to a June report by NBC News, this has had the effect of creating as many as 86 new banking deserts in the US, defined as "population clusters where no bank exists within 10 miles." What's more, the number of automated teller machines (ATMs) dropped around the globe for the first time ever last year, with the US, China, Japan and Brazil all seeing declines.

Fintech has undoubtedly given millions of people access to fast, convenient and 24-hour banking and payment services such as Venmo, Apple Pay, PayPay and more. But these services only work if you have a bank account. Today it's estimated that 1.7 billion people worldwide are entirely unbanked. The Federal Reserve believes 55 million American adults, representing almost of quarter of US households, are either unbanked or underbanked.

So if cash is increasingly out-of-reach for some and electronic payment services aren't an option, what's the solution? Again, I believe it's a dependable, stable digital currency, whether that's Bitcoin, Libra or something else.

Though they might not be as fundamental as banks, wealth management and advisory firms nonetheless play an important role in protecting and growing people's wealth. And like banks, their numbers are starting to thin.

Last year set a record in terms of mergers and acquisitions (M&As) among registered investment advisors (RIAs), and according to the ECHELON RIA M&A Deal Report, if this pace keeps up, "there could be over 200 transactions by year-end, a record volume for the wealth management industry." In the June quarter, the industry saw no fewer than 52 deals, a new record for a three-month period. 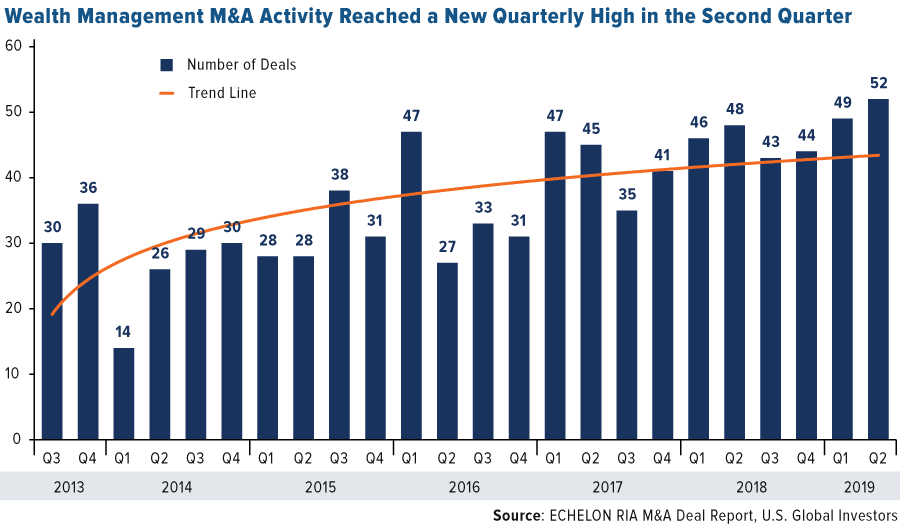 One of US Global Investors' neighbors, in fact – insurance provider USAA – is reportedly in talks to sell its $100 billion wealth management operations to retail stockbroker Charles Schwab.

"Schwab's move would be the latest in a string of recent deals by big wealth advisers and banks to snap up smaller firms as they hunt for growth in more specialized niches as well as other benefits of scale," the Wall Street Journal explains.

As I've already said, rising compliance costs seem to be a big factor behind bank closures and M&A activity. These costs have expanded in recent years because there's so much complexity, fragmentation and overlap in the US financial regulatory structure

Take a look at the visual below, made by the US Government Accountability Office (GAO), the government's "watchdog." It's enough to make you cross-eyed. 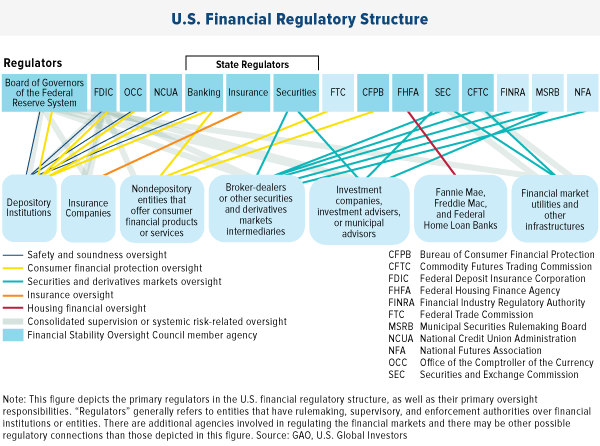 Because of the fragmentation, "financial entities may fall under the regulatory authority of multiple regulators depending on the types of activities in which they engage," the GAO writes in a February 2016 report.

The group continues: "Fragmentation and overlap have created inefficiencies in regulatory processes, inconsistencies in how regulators oversee similar types of institutions and differences in the levels of protection afforded to consumers."

What's GAO's recommendation? To reduce and streamline the rules and regulatory bodies.

I've made the same suggestion a number of times in the past. We need rules in order to maintain a level playing field, but the overlapping and fragmentation has led to increased costs, uncertainty, reduced competitiveness and much more.

At the moment, cryptocurrencies are not regulated, but it's only a matter of time. I welcome any rules that might assuage some people's concerns about money-laundering, terrorism financing and other illicit activity. Because, again, these assets will, I believe, account for a bigger and bigger economic engine, relied upon by millions of people and businesses all over the world. There must be trust, as there's trust today in the US Dollar and gold.

During his recent congressional testimony, David Marcus, head of Facebook's Calibra wallet, was asked if he were willing to be compensated 100% in Libra.

"Trust all of my assets in Libra? Yes, I would," Marcus responded. "I would because it is backed one-for-one with a reserve."

That's as convincing an endorsement as you're likely to find.