END_OF_DOCUMENT_TOKEN_TO_BE_REPLACED

GOLD TRADERS currently have their eye on two non-confirmations that so far have refused to "answer" gold's push to new all time nominal highs, writes Gene Arensberg in his Got Gold report from Houston for the Gold Newsletter:

Silver is lagging gold and the action of mining shares, both big and small, has thus far refused to reflect investor confidence that gold will be able to maintain its remarkable ascent.

At the same time, however, we have to take note that other indicators we dare not ignore are signaling continued strength for gold and especially silver. Chief among them are a surge of positive money flow into silver ETFs, bullish action in CFTC commitments of traders positioning (of the largest gold and silver futures traders), and the fact that both silver and Gold Futures in New York closed last week in significant backwardation again.

Our bias remains cautiously bullish for gold, silver and mining shares. Stops tight, but not too tight. With a nod to the Trading Gods (so as not to offend them too much), the action right now is reminiscent of the last time the short-happy "commercial" industry-player traders on the Comex futures market were overrun – beginning in August 2005 as gold first challenged, then tested, then blew through the very staunch defenses thrown up by the hedgers and short sellers in the $450-475 region.

Gold went on to test the $730s the following May, some 60% higher than where the commercials took their "goal line stand" that August. A similar move in this event would take gold up to around $1520 the ounce, give or take $100. That's not a prediction, just an observation. 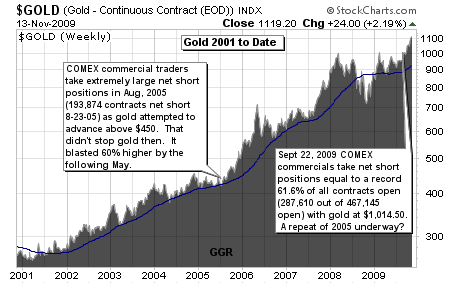 We have to keep the caution flags flying because of the enormous net short positioning of the Comex commercials. But in this case, that caution extends equally to both bulls and bears.

While it is usually bearish in times of such extreme commercial net short positioning, it is also exactly the condition we expect to be in place when the "Big One" – the seminal technical definition move higher we have been expecting – finally occurs. We almost certainly cannot have one without the other.

Looking at last week's action in more detail, and despite silver's relatively weak performance to gold, we note considerably more buying pressure than selling pressure for the largest silver ETF again, suggesting that larger investors continue to add SLV exposure on most any weakness in the silver price.

Since the inception of SLV in 2006 we see a clear trend of positive money flow into the trust (more buying pressure than selling pressure) as evidenced by increases in the amount of metal held by the most popular silver ETF. 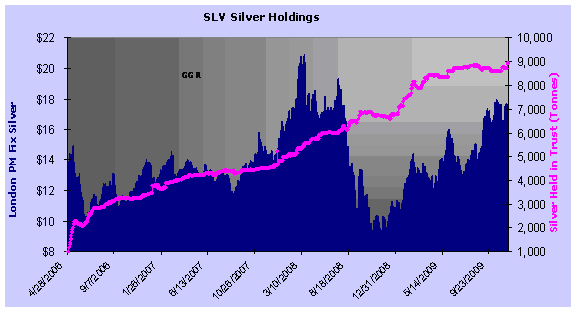 Now at just under 9,000 tonnes (287,880,359 ounces) of silver metal held, the SLV controls up to a quarter of all the existing Good Delivery bar silver available in London according to some analysts.

What we find interesting about that is that all the silver held by SLV only amounts to a little less than $5 billion as of Friday's close. Which in today's global-market world, isn't really all that much. As just one comparison, the US government utilized 36 times that much ($180 billion) just to bail out one large US insurance company (AIG) in 2008.

It wouldn't take very much of an increase in the amount of global investment demand to put material upward price pressure on the rest of the remaining silver inventory in the tiny silver market. With gold at $1100-plus now, we believe it is merely a question of time before a new surge of investment demand for silver erupts worldwide.

China has re-legalized precious metal bullion and is encouraging its citizens to accumulate physical metal. It is also just a question of time before people begin to realize the relative scarcity of actual physical silver metal compared to gold.

As we have pointed out in previous reports, today versus 1980 we have 51% more humans using 1,000% more Dollars-Yen-Euro-Yuan etc. to chase 50% less real silver metal in a world where anyone can buy the metal with a mouse click in their study, sitting in their underwear.

If the world holds it together and we manage to avoid a second brush with systemic financial system collapse, the new rush into silver that Jim Rogers now predicts could make the one in 1979-1980 – when silver briefly tested $50 an ounce – look like a warm-up.

No wonder we are seeing new positive money flow into SLV on most any dip. Got silver?

Gold meantime advanced to print new all-time nominal cash market highs last week, and also turned in a much higher weekly low. We were impressed by gold's tenacity during the Monday sell-down attempt to the $1090s. "Someone is all over the bid at $1097" reads our notebook from November 9th.

And just as we saw two weeks ago in the last full Got Gold Report, both gold and silver futures ended the week in backwardation, where the cash or spot price was higher than the front active contracts. In the case of gold, cash gold closed at $1119.20, some $2.50 above the December contract.

The cash price also finished higher than the February contract by more than $1 and was just a whisker below April.

Note that silver futures were also in backwardation, which is rare and unusual in the metals market. Backwardation suggests that demand for physical metal is immediate and material. Cash silver finished the week higher than the December and March contracts. Are we witnessing the early stages of metal scarcity or at least the immediate perception of it? Actual scarcity will almost certainly follow – if the world holds it together. The only question is when.

The irony is that long-time veteran metals traders scarcely believe it – yet. And as we have said previously, while backwardation by itself does not guarantee that the metals will advance in price, most analysts and traders view backwardation as a much more bullish than bearish condition. All else being equal, both gold and silver should (repeat "should") remain well bid on most any dip in the near term, especially given interesting and unusual developments in the commercial net short positioning.

Moving to the Gold/Silver Ratio, the GSR continues to flash a bit of a warning signal, stubbornly holding above its 50-day moving average and finishing the week at 64.25 ounces of silver to buy one ounce of gold metal. A rising GSR is a bearish omen and vice versa. And we are forced to pay attention to this signal now, since the GSR has not corrected back lower.

A rising gold/silver ratio is not just a metals market signal. Many traders use it as a canary-in-coal-mine gauge of overall market confidence. As of last week confidence is weakening if the GSR is any guide. Until the GSR is heading south again our antennae are up and our defenses are raised.

Mixed news for large, well-financed mining shares also came last week. They refused to "answer" much of gold's advance and although the HUI has advanced sharply since our last full report, closing Friday at 460.50 – up about 70 points or 17.9% from two weeks ago – we have to note that the HUI gold miners index would have to advance another 13% higher just to equal its May top in the 519 arena.

Perhaps it is asking too much for Gold Mining shares to be as robust now as they were then, in early 2008 before the collapse of Lehman, Bear, AIG and the near total collapse of the global financial system? Perhaps, but we also have to note that we viewed the action then as a warning because mining shares did not seem to be fully "responding" to gold that May.

In other words, while we probably should not expect the equities of mining companies to be as strong following the worst stock market panic since the Great Depression, we sure shouldn't start the very bad habit of making excuses for the indicators we rely on for guidance. Of course the massive new sales of equity by the miners (think Barrick) contribute to the underperformance, but probably not enough to cancel the overall effect.

Therefore, until the mining share indexes reflect more confidence; until they "answer" the movement in gold or even better, outperform it boldly, caution is warranted. 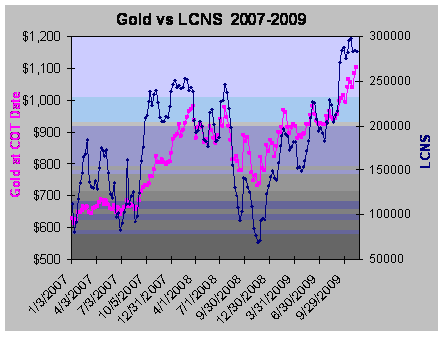 As gold advanced strongly and with the commercial traders actually reducing their collective net short positioning, the large commercials' net short came in at 53.3% of all contracts open on the Comex division of the New York Mercantile Exchange. Still high enough to be in the "danger zone", but it is very interesting that as gold advanced the largest of the largest hedgers and short sellers were apparently unwilling to add to their collective net short positioning.

We hasten to add, however, that the data is from last Monday, and a good deal of Comex water has flowed under the futures bridge since then!

It may also be unusual to see the Large Commercials' Net Short position in silver fall on a rising price, but last week's action pales in comparison to the prior week. As silver rose from $16.70 to $17.19 (49 cents or 2.9%) the commercial traders shed a big 5,379 contracts of their collective net short positioning.

Look at just the last two reporting weeks for the silver market, and we see that as silver rose 86 cents (or 5.1%) the largest silver futures hedgers and short sellers actually reduced their net short positioning by an eye opening 5,616 contracts or 8.7%...!

View it however you like, but long-time traders who see the commercials reluctant to take on new short positioning on a big increase in the open interest believe this hints that largest hedgers and short sellers have less, not more confidence that prices are set to fall harshly.

Down here in Texas we'd say that the always-short commercials appear to be in a tactical retreat.