END_OF_DOCUMENT_TOKEN_TO_BE_REPLACED

WITH the bull market on Wall Street entering its ninth year, questions about how much longer the second longest running bull has yet to run are beginning to swirl, writes Gary Dorsch at Global Money Trends.

Historically, the average bull market on Wall Street has lasted 54 months from trough to peak. The current bull is almost 97-months old. The total market capitalization of the Russell 3,000 index, the broadest measure of the stock market is close to $31 trillion, compared to $10 trillion at its lowest point of the Bear market that ended eight years ago.

The catalyst for the eight year old bull markets since 2009 has been the ultra-easy money policies pursued by a wide consortium of central banks who, since Lehman, have cut interest rates 679-times and bought $14.2 trillion of bonds.

As such, the line separating investment and speculation, which is never bright and clear, becomes blurred still further when most market participants are raking in large doses of money, effortlessly.

However, stock market bulls on Wall Street don't just die of old age. They usually end for one of two reasons:

Last month, five Fed officials reiterated their determination to normalize monetary policy, by lifting the federal funds rate a half-percent higher to 1.375% by year's end, and also reducing the size of the Fed's $4.45 trillion portfolio of mortgages and Treasury notes.

On March 29th, Boston Fed chief Eric Rosengren sounded the most hawkish, saying the Fed should be prepared to raise interest rates a total of four times to 1.625% by the end of 2017 to guard against overheating the US economy.

On March 31st, New York Fed chief William Dudley warned the Fed could begin trimming its $4.5 trillion balance sheet by shedding bonds as soon as this year, much earlier than most traders expect.

"If we start to normalize the balance sheet, that's a substitute for short-term rate hikes because it would also work in the direction of tightening financial conditions."

Former Fed chief Paul Volcker warned that Fed officials may find it difficult to rein in their historic stimulus at the appropriate time.

"At some point when the worm turns and the party is getting under way, to use that old analogy, at what point do you begin retreating?

"You can make a mistake and go too quick, but the much more frequent mistake in my judgment is you go too slow, because it's never popular to take the so-called punch bowl away or to weaken the liquor.

"And there's a lot of liquor out there now."

Economists often glean through dozens of statistics from both private industry and those reported by government apparatchiks, in order to get some idea of the direction of the US economy. Of the two sources of information, what's reported from the private sector is considered to be more reliable and trustworthy. 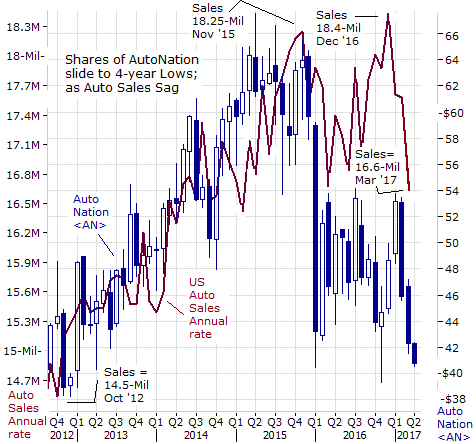 Last week's most interesting economic reports were released on Monday, April 3rd, with a look at US auto sales, which offer a measure of the confidence of the middle-class consumer – who is paying $31,000, on average, for a new car or truck.

What the latest reports show is passenger car sales plummeted again in March, dragging US auto sales to their third straight monthly decline, a strong indication that years of sales growth have come to an end. Sales for the month fell to just over 1.55 million vehicles. It was a big miss, with the actual sales pace coming in almost 900,000 vehicles short of what economists had expected. To find a weaker number, one would have to go all the way back to September of 2014.

Car sales in America have risen since end of the Great Recession and hit a record last year of 17.55 million. However, market analysts and investors are watching for clues that the eight year boom cycle is finally beginning to retrench. Car sales were down almost -11% in the month of March, while truck and SUV sales rose +5.2%, according to Autodata Corp. The combined sales fell to a 16.6 million annualized rate and down from a peak high at 18.4 million in December '16.

Industry experts are increasingly concerned about rising inventory levels and consumer discounts as automakers have had to push harder to sell their products. Cars and trucks are sitting on dealer lots for an average of 70-days, the highest level for any month since July of 2009. A pricing war in the market could undermine automakers' profits.

Last week, Moody's warned that flattening US auto sales pose a significant credit risk for auto lenders. Roughly six million auto borrowers with shoddy credit scores are at least 90 days late on making their loan payments, according to new figures released by the New York Federal Reserve. The%age of delinquent subprime auto loans has raced to the highest level since 2010. CarMax; the nation's largest used-car dealer, with more than 170 locations around the country, has a captive auto-finance unit that contributes almost 40% of the company's operating income. Those finance profits could be pinched if CarMax must make unexpectedly high loan-loss provisions. The%age of KMX's sales that are tied to subprime auto loans is around 16-percent.

Automakers also are raising incentives a bit to keep sales moving. However, traders weren't fooled. The S&P automotive retail index is already down 7.5% year to date in anticipation of tougher times ahead for the auto-sector. Shares of CarMax (KMX) are already 18% below the February highs. Auto-Nation; the US's #1 car dealer, has taken the brunt of the selling. It's plunged38% since the start of 2016, sliding to its lowest level in four years.

Quite often, the price and the price action of the stock market and the reading of the fundamentals of the economy are in conflict with each other. Usually at the beginning of important market turns, the fundamentals do not explain or support what the market seems to be doing. It is at these critical times in the trend that these two approaches seem to differ the most. Usually they come back into sync at some point, but often too late for the trader to act.

One explanation for these seeming discrepancies is that market price tends to lead the known fundamentals. Stated another way, market price acts as a leading indicator of the fundamentals and or the conventional wisdom of the moment.

While the known fundamentals have already been discounted and are already "in the market," prices are now reacting to the unknown fundamentals. Some of the most dramatic market movements in history have begun with little or no perceived change in the fundamentals. By the time those changes became known, the new trend was well underway.