END_OF_DOCUMENT_TOKEN_TO_BE_REPLACED

The president's idea of "fairness" has a distinct Down Under feel...

SO IT turns out US President Barack Obama is an Australian! Yes, you've probably heard all the internet rumors and innuendo that suggest Obama was born in Kenya and not in Hawaii. But all you have to do is listen to the man and you'll realize he's a fair dinkum Aussie, writes Dan Denning, editor of the Daily Reckoning Australia.

Obama unveiled his 2013 budget yesterday. In it, he proposed raising the tax on dividend income from 15% to 39.6%, or the top marginal tax rate. In Australia, dividends are already taxed at the same rate as ordinary income. Obama is busy making America more like Australia.

He also repeated his support for the "Buffett Rule". That's the rule, named after an octogenarian billionaire, that anyone who makes more than $1 million should pay no less than 30% in tax. Channeling his inner Aussie, Obama said, "We don't begrudge success in America...but we do expect everyone to pay their fair share."

There it is, "fair share". The idea of "fairness" is Australian as it gets. This is the land of the "fair go". And "fair dinkum" is part of the everyday language. Australians have a strong sense of fairness.

But what is fair when it comes to how much money you should earn? Should someone, the majority in government for example, be able to tell you how much you can "fairly" earn? Fairness is a subjective term. We all have a sense of what's fair when it comes to some things. But we sense that "fairness" is now being used as a code word to justify taking what you want for ideological reasons.

To be fair, this wouldn't be an issue if people sensed the world was a fair place where hard work is rewarded. That doesn't seem to be the case anymore. People look around and see CEOs and politicians and public sector workers and unions making big, guaranteed salaries all out of proportion to the work they do. This doesn't seem fair.

People sense the system they live in his corrupt and that if you play by the rules, you're a sucker. The only people that seem to get ahead are the people that cheat or have connections or are already rich. That doesn't seem fair either. And when people sense that playing by the rules doesn't pay anymore, they're more tempted to even things up by taking what's not theirs.

Of course we don't really know what people think or what they're sensing. We're just guessing at the social mood based on what we see, hear, and read. But what we sense is that confidence in a system is a fragile thing. When it's lost, the language of fairness gains value as political currency.

Obama's appeal to fairness is a complete fraud, of course. Raising taxes on dividend income won't plug the gaping holes in America's Federal Budget. The chart below shows that 65% of the President's $3.55 trillion budget is locked in as mandatory, non-discretionary spending. These "entitlements" were promises made to the American people out of a sense of fairness; benefits of citizenship they were entitled to by birth. But someone has to pay for them, right? From each according to his ability to each according to his needs, as Marx said...

The Price of a Fair Social Democracy...about $3.55 trillion 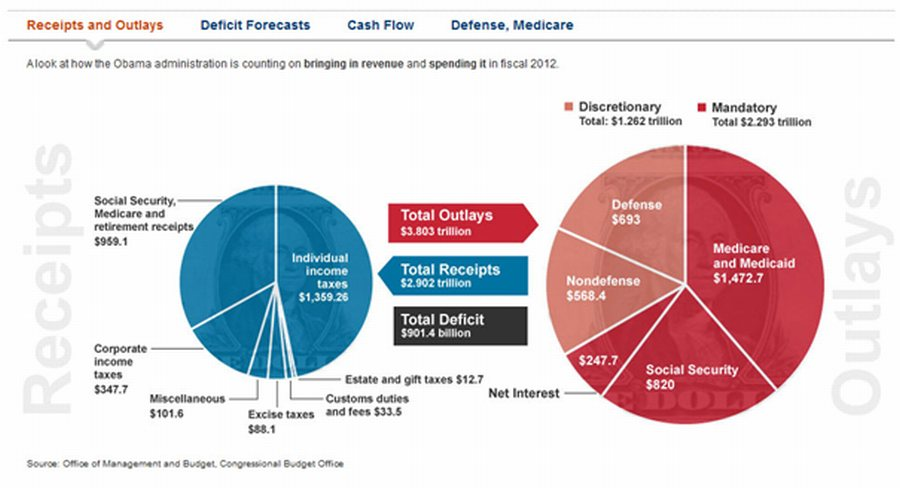 If Obama were fair dinkum about fairness, he'd ask the Congress to quit spending money it doesn't have and leaving the bill to the future. And if Congress were fair dinkum, it would fulfill its Constitutional obligation to guard the nation's purse strings.

There is also the little matter of $693 billion in spending on "defense", which presumably includes two foreign wars. If Congress were fair dinkum, it would declare war properly before funding the American military. Or, better still, it would accept the fact that defense spending in America is way too high and must come down as part of the nation learning to live within it means.

But no one in America is fair dinkum about the nation's fiscal reality. What is the future of American exceptionalism when the country is actually broke? And is a powerful military really what makes the idea of America great?

Building up a Gold Bullion reserve? See how BullionVault can make it more secure – while dramatically cutting your costs...