END_OF_DOCUMENT_TOKEN_TO_BE_REPLACED

Asia is becoming more capitalist. The West, less so...

And they show how Australia is going to share in the prosperity. Most importantly, the reports, papers and diagrams tell you why we'll be better off than other countries for having such a clever government to foresee these developments. Of course, tough new policies will have to be implemented, such as teaching Australian school children Asian languages.

We'll never forget arriving in Australia to discover that our schoolmates had all been busy learning Japanese since their primary school years. Japanese? That economy had been in the doldrums for more than a decade. Why on earth would you learn Japanese over Chinese or Indonesian?

Of course, Japan is Australia's second largest trading partner. But that's not because of government policy. Just like with the mining boom, the government only figures out something is happening by the time it's about to end. By our estimate, the Japanese learning craze hit Australian schools just as the Japanese economy began stagnating.

So the government's (very lengthy) white paper is probably a combination of late, wrong and irrelevant.

The real story is that Asia is becoming more capitalist and the West less capitalist. The turning point was World War 2. Until then, Western nations were freeing up trade and the economy. From World War 2 onwards, the welfare state, guns and butter, wars and exporting democracy were the Western focus. These have made our economies sluggish compared to our history.

The Asians have just been through this sluggishness and are moving in the opposite direction. Japan was the first Asian country to go capitalist and so it had its boom right after World War 2. Once South Korea split from the threat of communism, they got their share of the gains.

China's recent growth explosion came as the country began to liberalize and Deng Xiaoping supposedly said 'to get rich is glorious'.

We've added in two arrows and labels to make our point more obvious on the chart below. It shows the average income for a selection of Asian countries relative to a 'Westerner's' income from 1500-2012. The lower the line, the lower the Asian's income compared to a Westerner's. 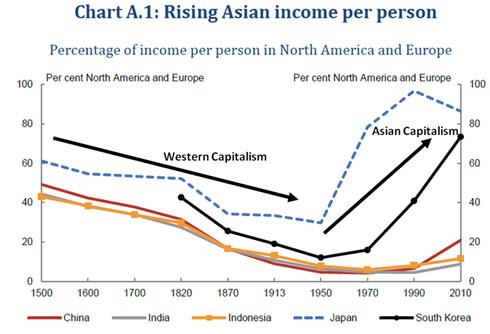 At first, the lines are trending downwards as the West slowly went capitalist and left Asia behind. The industrial revolution picked up the pace of Asian decline. Then, the Asian countries began turning capitalist after World War 2. They began growing and increasing their income relative to the West.

East and West Germany would make an interesting addition to the chart, because of the divergence from 1945 onwards. One went socialist, the other capitalist. Keep in mind that West Germany had to dump the economic policies of the Americans to get their economy going.

As any decent economist and businessman will tell you, it's the margin that's important. They mean two equally important, but different things, when they're talking about margins.

The economists' 'margin' is all about change. It doesn't matter that Australia's economy is more capitalistic than China's. What matters is that China is becoming more capitalist and Australia actively less so. (Carbon tax, mining tax, compensation for the carbon tax, exemptions from the mining tax...)

If you want to write in that Australia's economy is already more socialist than China's, don't bother. We're just trying to make the point that economic growth depends on change, not your starting position.

As for businessmen, the 'margin' is all to do with an additional unit of output. Businessmen will continue to produce one more widget until the additional benefit equals the additional cost. The more they want to sell, the lower the price has to go, reducing the benefit.

The more they want to produce, the more expensive it gets to buy the necessary machines and hire the extra factory space. The marginal cost and the marginal benefit eventually meet at a certain level of production. That's the optimal level to make the most profit and satisfy the most customers.

Costs and benefits can no longer be calculated, and so the production decisions are like shooting in the dark. The result is usually that consumers start shooting back by jumping over the Berlin Wall or standing in front of a tank in Tiananmen Square. They want the economy to reflect their decisions, not what their leaders think should happen.

Asia is emerging out of a world that is well behind in terms of capitalism and productive ability. The margins haven't yet been reached, like in the West. The benefits of producing more are far in excess of costs of doing so. Economic growth has a long way to go in real terms.

The irony is that the governments of these countries still haven't given up on trying to direct economic growth. They think building a city in the middle of nowhere is a good productive decision. Never mind the lack of marginal benefit to the consumer who doesn't move there.

It's this government interference which will make Asia's rise so turbulent for Australia. We already had the Asian financial crisis in the 1990s. The government policy of manipulating exchange rates blew up in the faces of countries who were embracing capitalism to a limited extent.

We can expect plenty more turbulence like that from Asia's new booming economies over the next century. That's what the Australian government's White Paper leaves out.