END_OF_DOCUMENT_TOKEN_TO_BE_REPLACED

How Argentina does – and doesn't – set a template for today's crisis in Greece...

ARGENTINA WAS HIT by a big crisis, similar to Greece's today, in 2001, write Robin Molinas and Adrian Ash at BullionVault.

Enforcing a strict currency peg of 1 Peso to 1 US Dollar meant the currency was over-valued, or the state should have reined in its spending, or the economy needed to be more productive, or all three, depending on which view you take. Either way, the trade deficit widened as imports became cheaper than exports – especially after neighboring Brazil devalued its Real in 1998-99, adding more pressure to the currency peg, and leading the government to borrow huge amounts of money overseas, including $40 billion arranged by the International Monetary Fund in December 2000.

High tax rates already meant tax evasion was widespread, so raising taxes to try and cover debt interest didn't bring extra revenue. Well aware how such crises had ended before, the middle-class quickly moved to withdraw money from bank deposits, even though interest rates jumped to 16%, because that wasn't enough to beat inflation. Squeezed by falling wages and rising prices, many Argentinians took to the streets of big cities, especially Buenos Aires, banging pots and pans in protest at soaring food costs, corruption and economic mismanagement – protests that became known as cacerolazo.

Pressure on the Peso, prices and now the banks mounted. Amid domestic riots and an international debate over the currency peg during the last week of 2001, and with bank deposits already frozen, an interim government – led by right-wing governor Rodríguez Saá – proposed a new currency, the Argentino. Named after the Gold Coin issued at the height of Argentina's 19th-century boom, it was to be backed by the country's housing and real estate, not by central-bank reserves, which were virtually empty anyway. But it never came to anything, as Saá proved literally a "seven-day president", whose only achievement was finally to declare default on the national debt.

Totaling $132 billion, that debt was approximately one-seventh of all the money borrowed by developing states worldwide. Some payments have since been refinanced and some restructured, but the International Monetary Fund, just as with Greece today, would accept no losses on its portion of the Argentine debt.

The difference between these two great crises? Argentina could devalue its currency, whereas Greece cannot. For 10 years before the 2001 crisis, Argentina had a currency exchange standard of 1 US Dollar to 1 Argentinian Peso. For the last 10 years, Greece has been part of the Eurozone, with 1 Greek Euro equal in every way to 1 German, Dutch, Spanish or Belgian Euro. During the Argentinian crisis, however, the currency's exchange rate fell dramatically, with the US Dollar rising from 1 to 4 Pesos.

This huge Peso depreciation in turn propelled inflation, but the official measure refused to show it. Annual inflation in Buenos Aires at one stage during the crisis actually showed a negative reading, as the government fought to avoid comparisons with the dictators' crises of the 1970s and '80s. 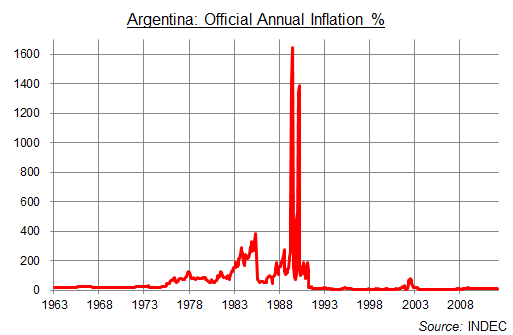 The Argentinian people nevertheless stopped trusting their government, their currency, and their banks, and the US Dollar began to overtake the country's Peso as a store of wealth. They were right to worry.

After 10 years of the currency peg, some 70% of bank deposits, credit and loans were denominated in US Dollars. In January 2002, new Argentine president Eduardo Duhalde pushed through a "forced Pesification", whereby everything was switched to the Peso. Bank loans were converted at 1-to-1, despite the real exchange rate already standing at 2 Pesos per Dollar. The conversion rate on deposits was better, but it was still well shy of the true rate and also handed the banks an immediate 30% shortfall on their balancesheets. In total, the 44 billion US Dollars in Argentinian bank deposits were switched to 55 billion Pesos. So the net loss of value to people's savings was more than 65% by the end of the year, when the Dollar exchange rate hit 4 Pesos. The poverty rate rose from 1-in-3 to worse than 1-in-2 inside a year.

Finally, under the next president, Néstor Kirchner, and with Duhalde's finance minister Roberto Lavagna still in his post, the external debt restructuring – which affected more than 76% of Buenos Aires' public debt, originally worth some $93 billion – came in January 2005. Did it work? Already in 2007, the government of Néstor's widow – Cristina Kirchner – imposed new exchange controls, capping the daily amount of money people were allowed to withdraw from the banks. But "Today we celebrate today our well-gained economic independence," said the Kirchner government in 2010, wrangling with the International Monetary Fund over $6 billion in loan repayments while enjoying economic growth of 9% annually, plus unemployment down by two-thirds from the crisis peak.

"The outcome would have been totally different if we had followed the recommendations traditionally made by the IMF – opening our economy, foreign indebtedness, financial liberalization and 'unbeatable' market-oriented reforms. Today we would have been embroiled in a fresh economic, social and political crisis."

Here in 2012, however, and with commodity prices now falling and economic growth quickly fading, cacerolazo is being revived in protest at the government, and again middle-class savers are attempting to flee their currency.

An unofficial exchange rate, offered by Buenos Aires' illegal casa de cambios has been created, known as the "Parallel Dollar" or "Blue Dollar", which trades at an extremely high price compared to the official price. Today's exchange rate standard is 1 Dollar to 5 Pesos, but 1 "Blue Dollar" is 6.15 Pesos, which is closer to the official Peso-Euro rate. The "Blue Dollar" is available in the downtown area, where traders now known as arbolitos, or little-trees, can be found at the side of the road flashing wads of green notes like leaves.

To block the black-market in Dollars, Argentina's tax inspectors – the AFIP – were last year armed with 300 sniffer dogs, trained to find money. By mid-December 2011, they'd found $2.7 million in illegal Dollars. But the government continues to support the thriving Blue Dollar market by blocking legal exchange. This month, on its website, the AFIP deleted any choice beyond "travel" or "business procurement" from the options for enquirers wanting to know if they're allowed to buy US currency. "Savings and investment" queries are no longer available. And the Argentinian government is also playing games with inflation data again, worsening the loss of confidence as strikes break out over inflation-linked wage increases and state benefits.

In particular, Kirchner's secretary for domestic trade, Guillermo Moreno, has been accused of cooking the books by encouraging McDonald's not to cook Big Macs. "In some branches of McDonald's," noted the Cronista newspaper in March 2011, "the Big Mac is advertised only by a small hand-written note, hidden on a side wall. In other places there is not even that.

Well, The Economist magazine's Big Mac index – launched in 1986 – tries to get round government manipulation of statistics, by comparing the price of McDonald's iconic burger around the world. Because "the price of a good should not vary much across efficient markets," as The Economist puts it. Comparing the different local prices of a Big Mac is therefore a blunt, if frivolous way of measuring the purchasing power of different currencies.

So by suppressing the Big Mac's price, people believe, Argentina would be able to suppress its apparent rate of inflation from what El Cronista calls "the very British Economist magazine." But it would also put McDonald's at risk of selling lots of under-priced burgers to hungry Porteños, however. So the world's most famous burger was hidden from view. Until now.

"Moreno lost the battle," reported Cronista.com in early June. "The Big Mac combo is out of the price freeze and has jumped in price by 26.2%." A discount of 2 Pesos two days later was "a result of negotiations with the Ministry of Internal Trade," according to the Argentinian press. But it also affected the burger alone – not the meal-deal including fries and a shake – edging down the Big Mac's Peso price where it might matter most. On the Big Mac Index.

Now, the Greek government already had a reputation for cooking the books long before its crisis broke, specifically to meet the requirements for Euro entry in 2001. Tax evasion has also been widespread, with untaxed business worth some 27.5% of the annual economy on one estimate. Given these drags, external debt has also leapt as Athens struggles to maintain its currency regime – a relatively strong currency that's seen relatively unproductive Greece slip to last place in Western Europe's league table of competitiveness. A run on the banks has already begun, with withdrawals now reaching €80 billion – one third of total deposits before the crisis began in 2010 – as household and business depositors fear the very same "freeze" imposed by Argentina a decade ago.

The difference is, quitting the Euro – unlike Argentina quitting the Dollar – can't be done overnight. "Pesification" would first mean create (or recreating) a currency to switch to. Whatever mess Argentina has suffered – before and since abandoning its currency peg – the mess in Greece would likely be much uglier still.

Looking to Buy Gold today? Get the safest bullion at the lowest prices, securely stored in Switzerland right now, only at world #1 online, BullionVault...

Robin Molinas is working as a research assistant at BullionVault, the No.1 gold and silver ownership service for private investors.