END_OF_DOCUMENT_TOKEN_TO_BE_REPLACED

Financial assets are all rising because the Dollar is falling. Take care...

OKAY, WHO PUT the financial world in a time machine and took us all back to early 2007, asks Dan Denning in his Australian Daily Reckoning.

Seriously. Oil traded above $80 overnight. Gold is hovering near $1,060. Stocks are up. Bonds are up. The Aussie Dollar is up. Will anything ever go down again?

The front page of today's Australian Financial Review has a time-lapsed picture of cars travelling on what apparently is a "Superhighway Paved with Gold". Ah! No wonder gold is going up. It would take a lot of gold to pave a superhighway...

But the caption underneath the picture explains that "There's big money to be made from the new tech boom by investing in internet stocks and telecommunications players." And this story just so happens to be published hours after Apple told the market it sold more iPods and Macintosh computers in the fourth quarter than ever before.

The crowd went wild. Apple shares finished up about 5%, just under US$200. Since they bottomed at $78.20 in January, shares in the company have soared by 154%. That's certainly a big enough rise to get your attention. But as with A-REITS, if you were going to buy into the bogus recovery, the time to do it was eight months ago – not yesterday.

Mind you, Apple is an interesting business that might have the ability to deliver great earnings growth through the teeth of a global depression. We doubt it. But iPods have become pretty indispensable in modern culture. You never know.

Today's Daily Reckoning has a simple point to make, however: Watch out! The only thing really going down right now is the US Dollar. And that gives us the heeby jeebies. Last time there was such a consensus about the Dollar's short-term direction, everything reversed, and quite suddenly.

The last time the Dollar index broke out from its lows was in June of last year. Once it busted out, it set off a chain reaction in financial markets. Investors got out of risk assets and back into short-term US Treasuries. Stocks went down, and Aussie stocks were no exception.

In fact, as you can see below from the chart (courtesy of Slipstream Trader Murray Dawes), there is a pretty clear relationship between the week greenback and the Aussie All Ords index... 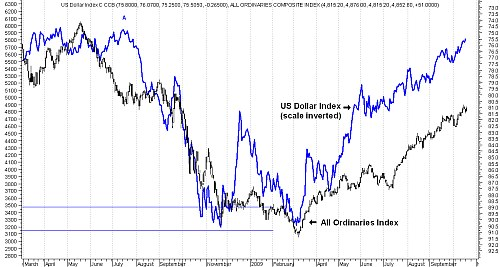 Murray inverted the Dollar index scale to show the correlation more clearly. And the message? If the Dollar index strengthens (the blue line goes down), the All Ords will weaken (the black line will go down too).

A US-Dollar rally and an equity selloff are even more likely now for two other reasons. First, any time you get a carry trade – in which investors borrow a cheap currency to buy assets – there is always the risk of a short squeeze. Investors who are short the Dollar cover that short by buying back the currency.

Right now, as you can see from two more charts below, investors are about as bearish as they've been on the Dollar (or least bullish, if you prefer). 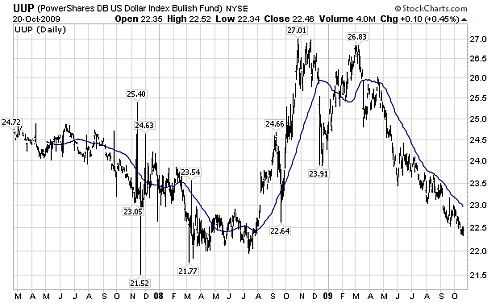 The Powershares DB US Dollar Index Bullish and Bearish Funds measure the greenback versus a basket of six other currencies, the Euro, the British Pound, the Canadian Dollar, the Japanese Yen, the Swedish Krona, and the Swiss Franc. One shows Dollar bullishness nearing a new low. The other shows Dollar bearishness reaching a new high. 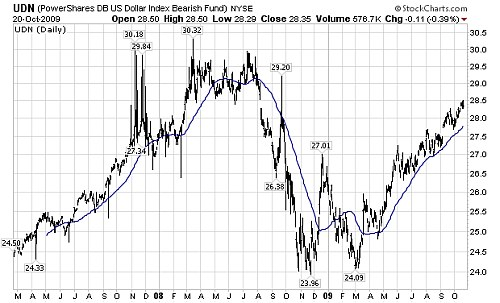 The second reason to expect a reversal in the Dollar and a sell-off in stocks is that stocks are pretty overvalued at the moment. John Hussman at Hussman Funds writes, that, "On the valuation front, stocks are presently overvalued, but to levels that we've observed at least several times in history. The anomaly relates to market action, where we can no longer find a single historical instance where stocks were more overbought on the combination of short – and intermediate – term measures we respond to most strongly.

Hussman then adds that, "One of the notable features of extreme overbought conditions is that investors rarely have much opportunity to get out, just like the fast and furious advances that clear oversold conditions tend to occur too quickly to capture unless one has already established a position. As for the present, we have rarely seen 90% of stocks suspended above their 50- and 200-day moving averages for as sustained a period as we have now observed."

Of course Hussman is writing about US stocks. What about Aussie stocks? We asked Murray to see if the Aussie market looks overbought on a technical basis as well. The brief answer is "Yes!"

"A quick look from 10,000 feet really shows us how overbought the market is at the moment," Murray comments in his note. "The weekly MACD (which shows us the relationship between a long term and short term moving average) has not been this high very often in the past 30 years. A quick look at all of the times it has been this high shows some interesting facts.

"The final blow off rally before the 1987 crash took the weekly MACD to a level below where it is now (the thin blue line). In 2006 when it reached the same level as in 1987 we did have a correction in the market, although it didn't last too long and we eventually headed higher for another year.

"The final rally before the credit crunch in 2007 took us to a level which is about where we are now. Do you think it was a good idea buying stocks in early 2007...? Not really. The market has now retraced to within a whisker of the 50% Fibonacci level. And the long term moving averages are saying that we are still in downtrend.

"The risk of entering the markets at this time is very high. Any longs should have tight stops, but any shorts need to wait until short term momentum indicators have shifted into negative territory which they haven't as I have stated in the past. It could be a good idea to take a bit of money off the table if you are sitting on good profits from the past few months. When the music stops you will only get a chance to sell with everyone else and it will be at much lower levels in the blink of an eye."

Have we switched religions on you? Not all. We're still a confirmed US Dollar bear. But a sudden collapse in the Dollar is not in the interest of any trader or investors who have large Dollar-denominated assets. And traders are amoral anyway. You trade the trends and the trends never move in a uniform direction.

So consider yourself warned. Though we are confirmed US Dollar bears, the Dollar is looking oversold. Stocks are looking overbought. And frankly the reflation of all asset markets (bonds, stocks, commodities, and real estate) is looking over cooked.

Ready to Buy  Gold...? Make it simple, secure and cost-effective at BullionVault...