END_OF_DOCUMENT_TOKEN_TO_BE_REPLACED

Like aging athletes, Welfare States will be unable to rejuvenate themselves...

EIGHTEEN years ago, Morgan Stanley's Investment Strategist, Byron Wien, quipped, "Unless Europe engages in an extensive program of restructuring, in 20 years it will be a vast open-air museum."

But Europe did not restructure herself, writes Eric Fry for the Daily Reckoning.

Instead, she clung tenaciously to her beloved Welfare State. As a result, the museum's doors are now open...and what a delightful museum it is!

Every exhibit hall features fascinating artifacts of capitalism and/or real-time interactive displays of the "Welfare State in Motion" — i.e. in stasis. The "Paris Exhibition" gets our top vote: Plop yourself down at a café table, sip a $15 cappuccino and watch unionized employees pretend to work.

Be sure to put it on your bucket list.

As museums go, this one may be the most dynamic and expansive one on the planet. If current trends continue, a brand new "American Wing" will be opening soon. In fact, to judge from the graphic below, this museum may soon have docents strolling the streets of almost every major economy in the Developed World. 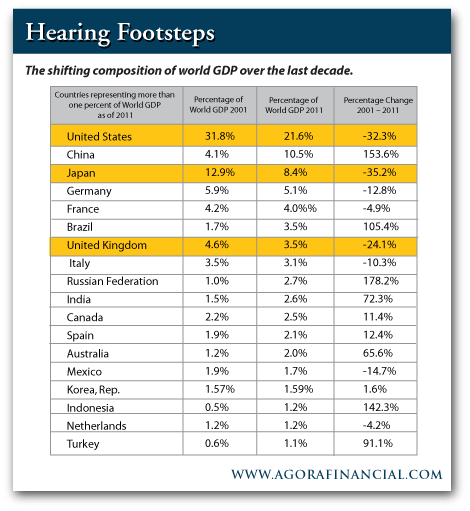 During the last decade, the six largest economies of the Developed World lost "market share," while six of the seven largest economies in the Developing World gained market share. America's share of world GDP, for example, plummeted from roughly 32% to 22%. By contrast, China and Brazil both doubled their shares of world GDP, and most other Emerging Economies posted similar results.

In 2007, the final year of Roger Clemens' legendary, 24-year baseball career, he signed a $28 million contract to wear Yankee pinstripes. He would go on to win six games (and also to lose 6 games) that season with an ERA of 4.18. That's almost $5 million per win, or $5 million per loss, depending on your perspective.

That same year, the LA Galaxy soccer team paid $250 million to import soccer legend, David Beckham, for a five-year contract. During those five years, Beckham spent lots of time nursing injuries and very little time leading his team to victories. Sure, he delivered a few memorable moments on the pitch, but not $250 million worth.

Known quantities may be familiar, but that doesn't qualify them as intelligent investments. Out in the global economy, for example, many of the preeminent known quantities are losing their edge to relatively unknown up-and-comers.

Half of global GDP is now produced by what we call the Emerging Markets. Looking farther out, the IMF expects the Emerging Markets to produce more than 60% of the world's GDP growth over the next four years — or about five times the growth the G-7 countries will contribute.

The IMF has been known to make a mistake from time to time. But its forecast is probably close to the target in this case. So perhaps the time has come to cast aside our fears and to embrace the world as it actually is, not as we might like it to be.