END_OF_DOCUMENT_TOKEN_TO_BE_REPLACED

APPLE wins the race...first US company to a $1 trillion market cap, writes Brian Maher, managing editor of The Daily Reckoning.

From the press stand rose a mighty roar...

Market analyst Mark Hulbert has identified the S&P's leading stock by market cap each year since 1980.

He then compared its subsequent annual performance to the S&P as a whole.

What were the results?

"On average," Hulbert found, "those stocks lagged the index by more than 4 percentage points a year."

Will Apple face down these odds?

Apple is not the world's first trillion-Dollar concern, incidentally.

That honor falls to PetroChina, which excelled that gorgeous number after its 2007 IPO – and subsequently hemorrhaged $800 billion over the ensuing decade.

We do not project a similar collapse for Apple.

We expect rather a gradual yielding, a slow-motion arson, a dying by centimeters and inches.

Next year's iPhone is not in jeopardy.

But we question Apple's ability to remain in first place for another reason altogether...

Like much of the stock market itself, Apple's milestone is rigged...ersatz...fake news.

Its victory arrives in part through the dark divinities of modern finance – stock buybacks.

The Fed's ultra-low interest rates have enabled corporations to borrow vast amounts at next to zero cost.

With this debt many have purchased their own stock at an unprecedented gallop.

Second-quarter buybacks doubled that record – to $433.6 billion, according to research firm TrimTabs.

And Apple is king of buybacks.

Through the year's first six months, Apple has purchased over $43 billion worth of its own stock.

That is the largest amount of buybacks in history, according to Howard Silverblatt, senior analyst with S&P Dow Jones Indices.

In fact, buybacks account for 42% of Apple's gains since 2013, according to Bloomberg's Dave Wilson: 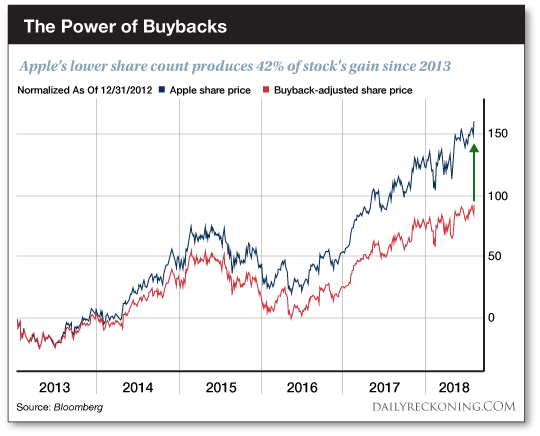 But how do these buybacks relate to Apple's record $1 trillion market cap?

A company's market cap is calculated by multiplying its number of outstanding shares by its stock price.

Apple had over 4.8 billion shares outstanding as of July 20 – according to the most recent data.

Based on that figure Apple's stock needed to strike $207.05 per share to excel $1 trillion.

And so, with its thumb heavily on the scale, Apple becomes the first US corporation to $1 trillion.

As reports Kevin Kelleher in Fortune, "Apple's march toward a $1 trillion valuation is much of its own making,"

But at what price?

Every Dollar sunk in buybacks is a Dollar unspent on expanding the business...and equipment...research...and development.

Comes a point when the cheap credit dries up...and buybacks no longer pay.

At that point a business must justify its market cap through higher productivity – not parlor tricks.

Wouldn't Apple's long-term interests be better served by spending on R&D instead of buybacks?

The "next big thing" is out there, awaiting discovery.

And if Apple doesn't unearth it...someone else will.

The one constant in this world of markets and men...is change.

So it is in business. So it is with nations...and empires.

They too enjoy their moments of peak market cap...

Ancient Athens attained peak market cap in the fifth century BC – "the Golden Age of Athens."

Athens had led a coalition of Greek city-states that defeated Persian invaders, and emerged undisputed leader of the Hellenic world.

The United States is not the first power in history to spread democracy abroad.

The 27-year Peloponnesian War that followed ultimately took Athens to its knees...and the Golden Age was no more.

Roman power covered Britain in the northwest, Mesopotamia in the east, North Africa in the south – and all points in between.

To what city did all roads lead?

Barbarians ultimately breached the walls and sacked the place, wondering what the toilets were for.

The British Empire, on which the sun never set – and on which the blood never dried – reached peak market cap in 1914, before the Great War.

It would never reclaim it.

The Soviet Empire saw its market cap peak in the 1970s – then collapse to zero on Christmas Day, 1991.

Which brings us to these United States. What about its market cap?

We estimate America reached peak market cap during the 1990s.

It was the lone remaining superpower.

It's victory over communism marked the "end of history".

America bestrode the world like an overtowering Colossus...and all the world's divergent rays converged upon the new Rome.

America has been frittering away its market share ever since...

In Afghanistan – the graveyard of empires – in Iraq, Libya, Syria and elsewhere.

America's mission civilisatrice to spread the democracy the world over now appears a bankrupt currency.

Who really believes in it anymore?

As the Greek city-states sought to counter Athenian power, many of today's powers seek alternatives to American power.

Perhaps China is the new Sparta to the American Athens – as the Soviet Union was before.

It is too big, too rich, too powerful – too American.

And no one power is ready to take its place affront the table.

And America as the indispensable nation?

We modify an old quote only slightly, and it gives us no pleasure to announce it:

The graveyard is filled with indispensable nations...