END_OF_DOCUMENT_TOKEN_TO_BE_REPLACED

How much longer can the US depend on its foreign creditors...?

"I HAVE ALWAYS depended on the kindness of strangers," says Blanche DuBois, in the final words of the play A Streetcar Named Desire.

Many citizens probably still cling to the old saw that public debt doesn't matter because "we owe it to ourselves." Wrong. Debt always matters. And as for whom we owe it to, it is a lot of kind (or, at least, not yet unkind) strangers.

As recently as 1970, foreign holders of US debt were essentially non-existent. But their slice of our obligation pie has steadily increased, especially over the past two decades, until now foreign governments and international investors hold about 35% of Treasuries, as the following chart reveals. 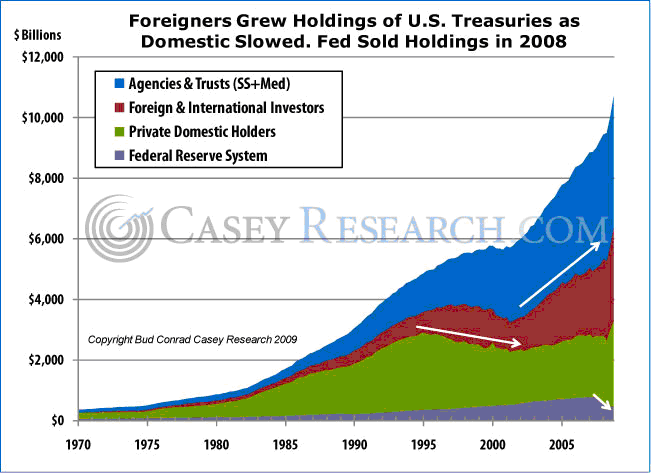 Of about $11 trillion in US debt, foreigners have about $3.8 trillion, with China in the lead at nearly $1 trillion and Japan not far behind at around $750 billion.

Most likely, though, this trend has already leveled off. The Chinese, Japanese, Russians, and Indians have openly announced their decision to cut back on further purchases and existing holdings of US government debt.

Beyond that, the source of funds previously allocated to their purchases – trade surpluses – has declined sharply with the recession. As a consequence, going forward, foreign buying is more apt to shrink than increase.

While foreigners are continuing to show up for the record-sized Treasury auctions, it's due to the Dollar retaining its status (albeit shakily) as the world's reserve currency. But they have become quite cautious, generally investing towards the front end of the yield curve, which is a vote of no confidence in the buck's future. As the chart below illustrates, sales of long-term bonds to foreigners are way down. 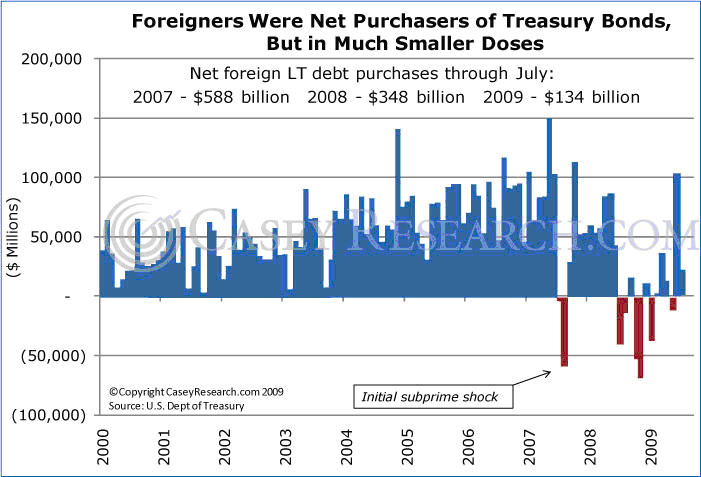 So what does all this mean?

It means that a big chunk of our prosperity during the past twenty years was due to a trade deficit that put billions of Dollars into the hands of foreigners, who then turned around and bought Treasuries with them, helping the US government finance its massive deficit spending. That's over – and the unwinding process has just begun.

Yet federal deficit spending, far from reflecting this reality, has grown by leaps and bounds. But who will finance it? Let's extend our first chart out a few years. 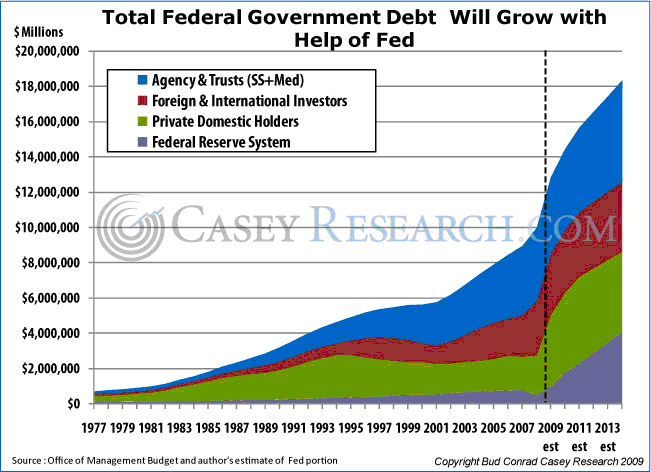 As you can see, we project that foreign participation has plateau'd. US private domestic investors can probably increase their holdings moderately, now that households are consuming less and saving more, and financial institutions have money to invest in Treasury paper. The agencies and trusts (like Social Security) are really not a part of the equation, but rather reflect programs on "auto-pilot" and quickly headed to the point where they will negatively impact, not help, the deficits.

Adding it all together, even under the most conservative of assumptions, there are simply not enough buyers to cover the accelerating federal deficits. That leaves the lender of last resort, the Federal Reserve, as the only remaining candidate to satisfy the government's grotesque appetite for funding. There is no viable alternative.

The Fed will take up the slack in the only way open to it, by printing money out of thin air and exchanging it for promises from the Treasury. That means an escalation of monetary inflation and, somewhere down the road, serious price inflation as well. We don't know exactly when that will happen, only that it must.