END_OF_DOCUMENT_TOKEN_TO_BE_REPLACED

The fiat money fun is over. From here, real value will out, even in US housing...

WE'VE RECENTLY had a number of queries about real estate, writes David Galland, managing editor of The Casey Report.

And no wonder. For starters, US real estate prices have come down. Plus, in an environment with next to zero interest rates, the idea of possibly picking up some income-producing property on the cheap holds a certain appeal to some. Then there's the fact that real estate is very much a "tangible" – and so should hold up reasonably well, should the fiat currency system come undone, as we expect it will before this crisis is over.

The following, from reader and correspondent Ross, considers the issue of home buying from an interesting angle.

"My wife and I have been considering buying/building a house for a while now. After long months of searching, we have had to ask ourselves about the "value" of a home. I say this because my parents in 1972 purchased a 2,000 sq/ft home for $20,000. That was almost exactly what my father made per year at his job at the time of purchase.

"Is this ratio one to consider as a prudent homebuyer not trying to live beyond his means? I make about $150,000 a year and can't imagine purchasing a house here in Pittsburgh for that price and being happy with that purchase.

"Could hyperinflation cause the price to 'appreciate' that same way over time? Is inflation what caused my parents home to return 9 times what they paid for it? The reason I wrote to you regarding this topic is that I thought maybe there was a future missive buried in this line of thinking. Maybe not, but if you have time I would love to hear your thoughts on home purchasing at this time."

In response, I have to point out the obvious, that all real estate markets are local. Simply, unless it's a mobile home, you can't pick your home up and move.

So, for example, you could offer me a house in downtown Detroit for free, and I wouldn't take it. But a house up the road from me just traded hands at over a million Dollars (for the record, a 25% discount off the offering price). So where, and when, to buy will largely depend on local market conditions...and the value proposition of the real estate on offer.

That said, given the dismal outlook for the US economy and housing in particular, if you're going to buy today – you should only do it on your terms. Don't let a real estate agent push you into a quick decision or into raising your bid. Someone might beat your offer, but with the large housing inventory, the odds are good another dream house is available just down the block.

Now, as to the inflation question. If you do the inflation calculation, then based strictly on the government's debasement of the currency over the last 30 years, the $20,000 that Ross's parents spent in 1972 is the equivalent of $107,000 today. That they sold the property in 2001 for $180,000 confirms that there was more than inflation going on.

As you can see in the chart just below, while they sold it early on in the housing bubble, by 2001 housing prices – encouraged by the Fed's loose money policies and a collapse in lending standards – were already on their way to the stratosphere. 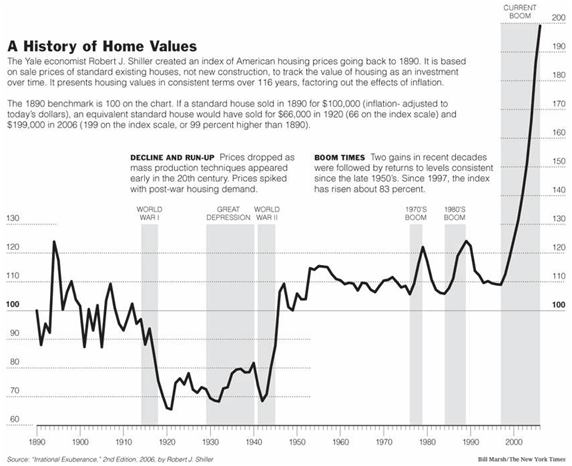 While much of the appreciation in Ross's parents' home can be attributed to currency debasement, it is reasonable to attribute the additional appreciation to the general housing bubble and, finally, positive local market conditions.

But that was then, and this is now. Is now a good time to buy? Again, with the caveat that all markets are local, my general sense is that it's too early, but maybe not by much.

Weighing in on the "wait a bit longer" side of the argument is the large inventory of homes. And while that inventory is high, it is likely understated due to the shadow inventory of houses owned by fed-up sellers who have pulled their homes off the market in order to rent them and offset some of their carrying costs while waiting for better days. In addition, there are millions of houses that are either in foreclosure or will be before too long, adding to the inventory.

On the demand side, because of high unemployment, a sluggish economy, and the end of government home purchase incentives, home sales are falling again – indicating no significant decrease in house inventories anytime soon.

On the flip side of the argument, today's mortgage rates are unnaturally low – and so, unlikely to last. When they begin to rise again, they are likely to rise a lot, and in relatively short order. First and foremost, there is no way the government's benchmark rates can continue to bump along next to zero, especially not with the amount of debt and deficits we're running. And even a return to a rate close to the long-term norm will have a devastating effect...starting with mortgage rates (and, as a knock-on consequence, house sales and prices).

Secondly, something like 95% of all new mortgages are currently being purchased, or otherwise guaranteed, by Fannie Mae and Freddie Mac. As you don't need me to tell you, those two organizations have essentially been nationalized and are broke and doomed to fail. Simply, outside of a full-on communistic system where all property is the property of the state, the government can't be the mortgage lender of first, second, and last resort.

In time, as Fannie and Freddie are revealed for the scams they are – followed by another trillion-Dollar bailout – the government is going to have to extricate itself from the mortgage business, which will result in rates being set by the market and not by government dictate.

Thus, buying a piece of property today with a fixed-rate mortgage of just over 4% would be about as cheap a mortgage as you'll ever get...now and for the balance of your lifetime.

What about inflation? Though one is tempted to add the likelihood of a big inflation to the "buy now" side of the balance sheet – because property is tangible – my sense is that it's mostly a moot point. While Ross can't foresee a house that sells for $300,000 today being worth $2.7 million in 30 years, not only can we foresee that happening – we'd be surprised if that were all it sold for. Of course, my reference point is today's currency units; in 30 years, much fewer "new Dollars" will likely be necessary.

That's because the past 30 years represent the salad days of the current fiat monetary experiment. The fun part, if you will, with everyone feeling wealthier because they had so many more Dollars in their bank and brokerage accounts, and because the things they owned that were priced in Dollars – Ross's parents' house, for example – had appreciated in nominal terms. The next 30 years, however, will include the dark years where the fiat monetary system comes unglued.

When that happens, some analysts expect that the Dollar price of sound money – gold – will rise to $5,000 an ounce. Other analysts think it could go much, much higher than that. I don't know, and to some extent, as long as I have a sufficient position in gold, I don't care. That's because the Dollar is just a piece of paper with some numbers on it. As long as my gold, and other tangible assets I own, continue to hold their purchasing power, even as the number of zeros on the Dollar expands – I'm good to go.

As a tangible, the price of your real estate is likely to rise in Dollars' terms, but only because the Dollar is falling. However, the premium that Ross's parents received as a result of the housing bubble will not rematerialize in our lifetimes. The overbuilding of the recent bubble years, coupled with fairly straightforward demographics related to the baby boom and bust – along with the inevitable return to sane, versus insane, lending standards – will conspire to keep the value of homes, regardless of their price in Dollars, at or well below current levels for years and even decades to come.

So, no easy answer to the question of whether now is the time to buy. As with most things, it comes down to a personal calculation, based on how much you can comfortably afford to pay. By extension, that requires further contemplation as to how confident you are that your income and net worth will continue to allow you to afford the payments well into the future. Of course, in addition to your mortgage payments, that calculation has to take into account property taxes, which are going up, as well as maintenance, association dues, and more.

And because all real estate markets are local, you also need to do some serious due diligence on the outlook for local markets. In Ross's general neighborhood, Harrisburg, Pennsylvania, just defaulted on a $3.3 million municipal bond payment, and Philadelphia's finances are also in poor shape – so, before buying, he should do enough research to be confident that the neighborhood isn't going to deteriorate.

Finally, one more reason why we may not have to wait overly long before real estate becomes at least a rational investment. And that reason is that there is a lot of money on the sidelines just now, both in the US and abroad. Much of that money is in cash, and much is in bonds – a disaster in the making.

As interest rates start moving up, and the fiat currencies start to come down, investors will become fairly desperate to get out of bonds and into pretty much anything with a discernable heartbeat. Once housing prices have fallen by another 20%, 30%, real estate will be again considered a safe asset to own, and some percentage of money will certainly begin to flow back into it.

So, personally, I would hold off buying real estate for the time being. At least in the post-bubble markets where the debt still really hasn't been addressed (much of it now sits on the books of the Fed, and Fannie and Freddie), and where desperate governments will take advantage of the fact that you can't pick up and move your house to raise your property taxes.

Gold Bullion – yours, secured in a vault, at the lowest possible costs. Go to BullionVault now...