END_OF_DOCUMENT_TOKEN_TO_BE_REPLACED

The over-indebted US Dollar remains tied to the debt-ridden US economy. No wonder foreign creditors are buying hard assets like Gold...

THE ROLE of the UNITED STATES as the world's dominant economic superpower is now challenged by an out-of-control growth in debt and a deterioration in its reputation as a financial haven, writes Bud Conrad of Casey Research.

The Dollar is losing its special status as the global "reserve currency." That is leading, in turn, to higher inflation, higher interest rates, weakening financial assets (stocks and bonds) and runaway prices for commodities.

Let the data and let them speak for themselves, with some interpretation along the way.

#1. US Government Deficits: From Bad to Worse
Government deficits are the root source of the creation of money...and its eventual debasement.

Simply put, when the federal government spends more than it raises in taxes, it eventually has to create more money (in complicity with the Fed) in order to pay the bills. 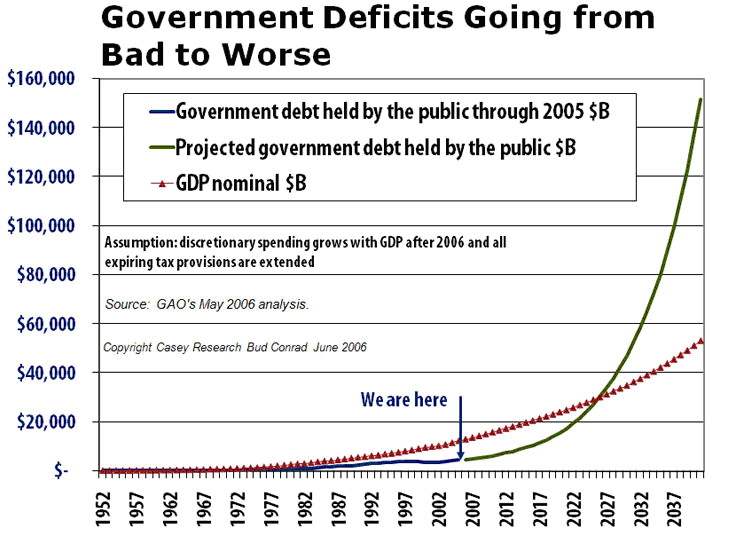 Of course, the government can borrow the money, but that often includes borrowing newly created money from the Fed.

The deficits remain and they accumulate over time. They must be resolved, either by payment or default, either overtly or covertly, through the mechanism of inflation.

While some level of government deficits may be acceptable over modest periods of time, the US deficit is now well past this point. The deficit will soon grow to monster proportions as the baby boomer retirement obligations exceed America's ability to tax the declining number of workers contributing to the Social Security and Medicare funds.

Projections of the likely deficit compared to GDP growth make it clear that the government is faced with hard choices. The easy path of just letting the Dollar fall – and thereby devaluing the government's debt – is the most likely.

#2. The Expanding US Trade Deficit
It is consumers who primarily receive the money provided by US government deficits. In this globally interconnected world, they then spend a portion of that money on foreign goods.

An unintended consequence of the ballooning government deficits, therefore, is a large and growing trade deficit.

The foreign recipients of those Dollars – whether Chinese manufacturers or Middle Eastern oil sheiks – have, in recent years, turned around and reinvested those dollars in US Treasuries. They have done so because of the perceived safety of those instruments, and because of the sheer volume of the dollars they have to invest.

In addition, it has been in their commercial interest to help finance the US deficit. It keeps US consumers spending. 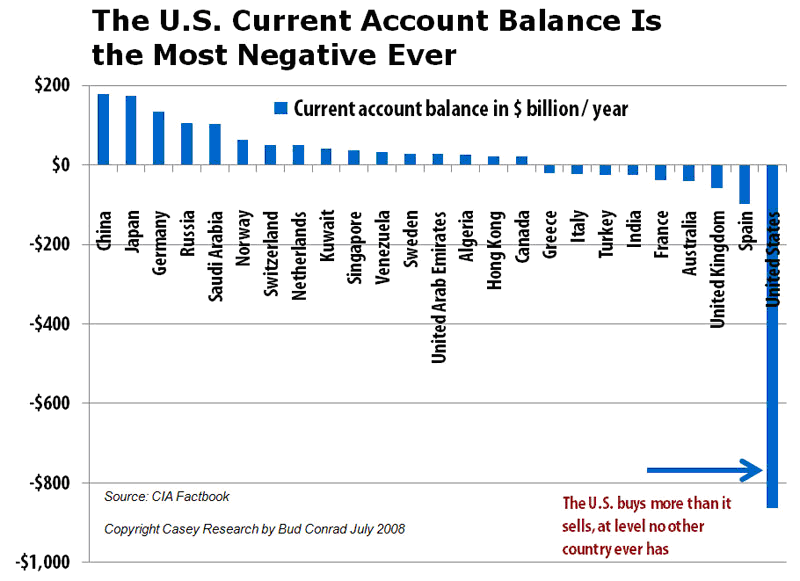 With the trade deficit now running at $750 billion per year, and much of that money coming back into US Treasury bonds, the US government has grown dependent on foreigners to sustain its continuing deficits.

That level of debt would normally cause extreme weakness in a currency – just as it would in the value of debt owed by a deeply indebted individual. However, the sheer magnitude of the foreign holdings provides something of a bastion against a total collapse in the Dollar.

Even so, some foreign holders are easing toward the exits...through the purchase of an operating company here, a resource deposit there, or a landmark New York building for example. They might make a billion-dollar equity investment in a brand-name company, or exchange some dollars for a basket of currencies or a ton or two of Gold.

It's a delicate balancing act, because if they get too aggressive, they risk triggering a mad dash for the exits, a nightmare scenario where the value of their trillions of dollars in holdings would be devastated almost overnight.

#3. Rising Oil Prices Affect Everything
The growing global demand for oil, coming as it is against a backdrop of limits being hit in production growth, is a major contributor to today's big price rises.

The clear and present danger is that we are now using several times more oil than we are discovering. The world currently produces about 310 billion barrels of oil per decade. That amounts to about three times the current discovery rate of 100 billion barrels per decade.

According to the Peak Oil calculations, we have already used about half of the energy stored over the last 100 million years. Against that, we have a steady increase in demand emanating from population growth and economic development, especially in Asia.

This, coupled with the dearth of major new discoveries, assures that energy markets will remain at high prices, for the foreseeable future. The current big drop from almost $150 to $110 has happened from a slowing economy and from some conservation at the extreme high gas pump prices, but the long-term view is that the lack of reasonable alternative to petroleum argues for continued higher prices returning to the previous peak in the year ahead.

As energy is a component in the manufacture of all goods and services, this is of no small consequence. Energy has been the basis of the abundance of our current existence and has allowed human population to grow from 1.5 billion to 6 billion over the last century.

#4. War Affects the Deficits and Hurts the Dollar
The war in the Middle East adds unwanted pressure on oil and ratchets up government spending. Less obvious is the damage to US prestige that is important in the ability of the US to attract much-needed foreign investment. 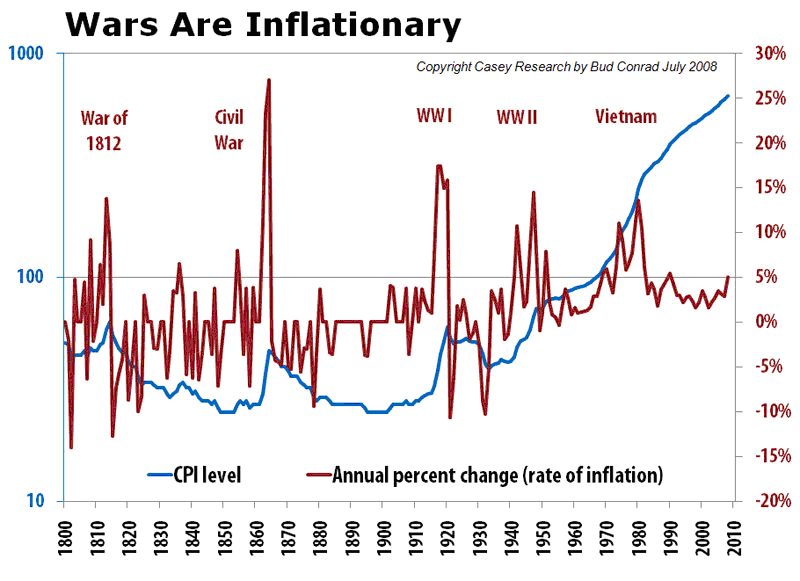 The Congressional Budget Office estimates the war will cost 3 to 4 trillion dollars, an amount of sufficient size that it will affect the US financial system.

Regardless of the short term political ups and downs or even a new administration, the pressures from war for big deficits and for dollar depreciation are inescapable.

So where is the economy going in the next six months? Here are my projections:

Finally, it is important to recognize that the world remains in the throes of a deep and serious crisis. While many analysts express the view that the worst is over – or that, after a modest downturn, things will bounce back just like they always have – our view is that what we will actually witness going forward is a fairly steady erosion of paper currency purchasing power and sluggish economic growth.

The crisis will accelerate, moving faster, even, than in previous major shifts such as that witnessed in the 1970s.

While history may find we are too pessimistic at this point in time, in our view it is far better to prepare for a worsening crisis and hope that it does not materialize, than to expect business as usual.

Want more...? The Crisis & Opportunity Summit is the first event-of-its-kind by Casey Research – now giving investors exceptional information and analysis for over a quarter century. To sign up for this free event, simply click here now...