END_OF_DOCUMENT_TOKEN_TO_BE_REPLACED

THE U.S. Non-Government GDP deflator – a measure of price inflation for private business and consumers – suddenly sank between June and Sept. according to the latest data.

Dropping from 2.6% in the second quarter of this year to 0.7% in the third quarter, in fact, it dropped to a 43-and-half-year low.

Economic growth, on the other hand – which is tempered by the GDP deflator – rose from 3.8% to 3.9%, according to the Bureau of Economic Analysis.

Or is that merely a convenient statistical fudge? 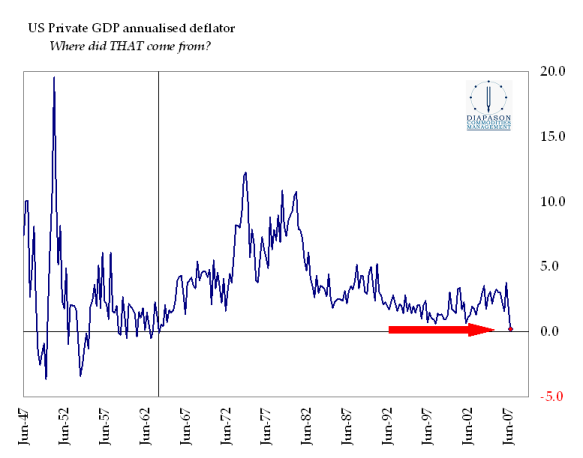 At a time of soaring commodity prices, solid wage gains, and a weakening Dollar, are we supposed to believe that the rate of price inflation in the US fell from a 16-year high in March to its lowest level since 1964 by the end of last month...recording the most rapid two-quarter slowdown since the winter of 1975/1976...?

Other than that post-oil-shock drop, this would mark a 50-year minimum. 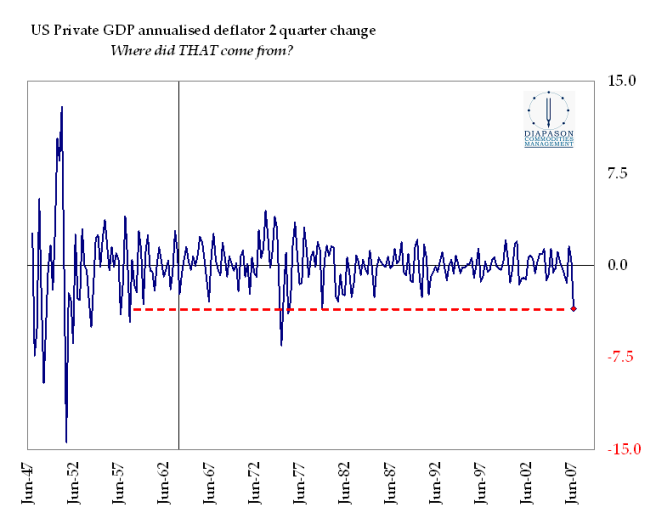 But then, if the Bureau of Economic Analysis had deflated US economic growth by the average GDP deflator of the previous four years – some 2.8% – third-quarter economic growth in the US would have been reduced to a sickly 1.3%...rather than the 3.9% suddenly being trumpeted across the financial newswires today.

Stalwart economist of the anti-government Austrian school, Sean Corrigan has been thumbing his nose at the crowd ever since he sold Sterling for a profit as the ERM collapsed in autumn 1992. Former City correspondent for The Daily Reckoning, a frequent contributor to the widely-respected Ludwig von Mises and Cobden Centre websites, and a regular guest on CNBC, Mr.Corrigan is a consultant at Hinde Capital, writing their Macro Letter.