END_OF_DOCUMENT_TOKEN_TO_BE_REPLACED

AMERICA'S elected officials demonstrated once again this week that they are good for nothing (approximately), even on their best days, writes Eric Fry in the Daily Reckoning.

Not even the "revolutionary" Tea Party contingent could make a visible imprint on the ultimate outcome. It's not their fault; it's nobody's fault in particular; but it's everyone's fault in general.

It is the fault of inevitability.

Democracies vote themselves perks and entitlements they cannot afford…until they go bankrupt. Empires, likewise, gorge themselves until their economies become starved for self-sustaining productivity.

So what hope is there for a democratic empire like America?

The Fates will not be denied. America will grow fat and happy until she cannot lift herself out of her La-Z-Boy to punch a time clock. She will vote herself perks she cannot afford until the day her creditors say, "Enough!" Her fate is certain; the day is unknowable.

But to get an idea what sort of fate may be coming our way, let's cast a glance across the Atlantic.

Bond yields around the periphery of the Eurozone have been soaring. (that is, bond prices have been falling). The PIIGS bond markets seemed to be saying, "Hey, if the US cannot pass meaningful, debt-reducing legislation, what chance do we have?"

The US can always print its way to a kind of solvency. The Eurozone nations cannot…at least not yet. (The Drachma, Escudo and Punt will, we predict, return to the stage within the next two or three years.)

Greek bond prices have been tumbling for weeks – pushing short-term yields above 30%. But that's old news. The newer news is that yields are also soaring in the relatively solvent nations of Italy and Spain. Two-year yields in these two countries are now rising faster than yields in Greece. 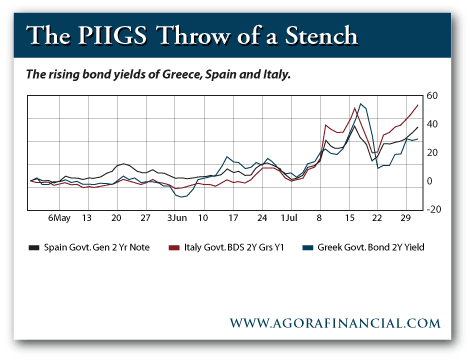 Admittedly, two-year yields in Spain and Italy are nowhere near Greek yields. But the trend is not comforting. And that's not all…The very newest news is the nascent panic in the core of the Euro zone. The chart below tells the tale. 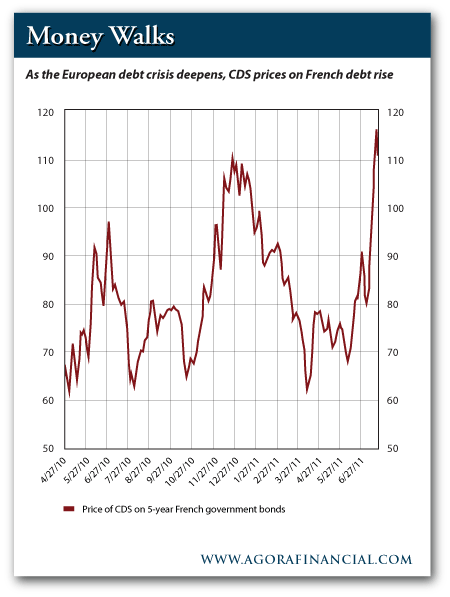 The price of five-year credit default swaps (CDS) on French government debt have rocketed higher during the last few days, which means that investors have become increasingly concerned about the credit worthiness of the French government – a AAA-rated credit. (CDS, as regular readers know, are a kind of insurance against a default. The greater the perceived risk of default, the higher the price of a CDS).

Soaring bond yields in Spain and soaring CDS prices in France are not necessarily cause for concern; but neither are they license for complacency.