END_OF_DOCUMENT_TOKEN_TO_BE_REPLACED

The US has already lost its AAA status in the CDS market...

ALL-TIME HIGHS are not usually the best time to buy an asset. Then again, the Gold Price has nearly doubled since early 2008, when it hit a then-new all-time high of $850 an ounce. We would not be surprised to see the price of the yellow metal double again over the next three and a half years...or triple, says Eric Fry in the Daily Reckoning.

It's not because we think gold is such a great thing that we expect the Gold Price to soar; we expect it to soar because the world's major currencies are not such great things.

The value of gold is backed by a 3,000-year legacy of being the ultimate currency and store of value. The value of a Dollar, on the other hand, is backed by the full faith and credit of the United States.

The problem is, there's too much credit and not enough faith...

To review: CDS are a kind of "default insurance." The buyer of a CDS is buying insurance against default by a specific issuer of debt, whether that be a company or a country. The greater the apparent likelihood of a default, the higher the price insurance. That's why the price of a Greek CDS is 1,000 times greater than the price of a Norwegian CDS.

This extreme pricing difference is to be expected. In absolute numbers, the national annual deficits of Greece and Norway are identical. But while the Greeks are running a budget deficit equal to about 14% of its GDP, the Norwegians are running a budget surplus equal to about 14% of GDP. Greece might default tomorrow. Norway is unlikely to default any time this century...or at least not until its North Sea oil runs out.

Interestingly, the price of 5-year CDS on US debt is also higher than that of Norwegian CDS. Both issuers are rated AAA. And not so long ago, CDS prices on both of these sovereign borrowers were identical. For a short while, in fact, Norwegian CDS were more expensive than their US counterparts. But the spread between the two has been widening out during the last several months. In other words, US CDS prices are rising relative to Norwegian CDS. 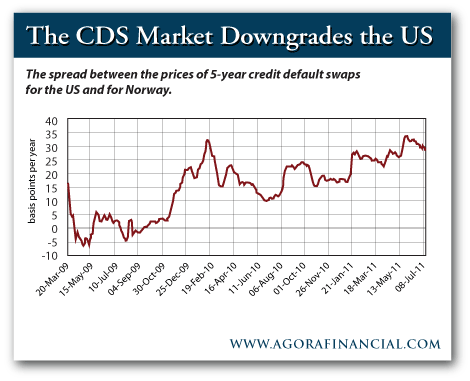 As of Friday, US CDS were more expensive than the CDS of six other AAA-rated sovereign borrowers. According to CDS buyers, therefore, the United States is somewhat less deserving of its AAA rating than Norway, Sweden, Switzerland, Finland, Netherlands and Germany.

Counter intuitively, despite the threat of downgrades and the rising price of CDS, demand for long-dated Treasury bonds appears to remain fairly strong. Yesterday, the Treasury attracted higher-than average-demand for an auction of 30-year bonds.

"The bid-to-cover ratio on the $13 billion in bonds," Bloomberg News reports, "which gauges demand by comparing total bids with the amount offered, was 2.80, versus a 2.64 average at the past 10 sales."

But the longer Congress dithers about the debt ceiling and budget cuts, the greater the peril the US Treasury market faces...and the higher US CDS prices climb. Most likely, Congress will figure out some way to finagle a non-default by pretending to implement "tough" budgetary revisions, while functionally kicking the can down the road.

Whatever the near-term outcome, the protracted bickering on Capitol Hill has confirmed what America's largest creditors already feared: America has an enormous debt problem and has zero resolve for dealing with it.

Get the safest gold – securely vaulted in your choice of London, New York or Zurich – at the lowest prices with BullionVault...