END_OF_DOCUMENT_TOKEN_TO_BE_REPLACED

Are we exiting the eye of the hurricane...?

SO THEN. Ratings agency Standard and Poor's decided to rain on everyone's parade after the markets closed yesterday, writes Dan Denning, editor of the Daily Reckoning Australia.

You'd think banking would be a low-profit, low-growth business to be in during a Credit Depression. At least we'd think so. Apparently S&P agrees, although to be fair, downgrading the banks these days isn't a terribly bold analyst call. It's like predicting a chance of showers when you're in the eye of a hurricane.

In fact, we are probably in the last days of the eye, if you want to go with that metaphor. The first wall of the storm was unleashed by the collapse of Lehman Brothers in 2008. Governments and central banks boarded up all the windows and papered over all the cracks in the financial system with stimulus spending and quantitative easing.

But now the second wall is upon us. And it doesn't help that banks in the post-Lehman world tried to rehabilitate their balance sheets by stuffing them with government debt. This probably is most acute in Europe, where the assets of the banking system are indistinguishable from the liabilities of the public sector.

S&P's move, though, is a reminder that global capital markets are interconnected and mutually dependent. Nothing is strictly local. Your neighbor's crisis is your crisis, even if your neighbor lives on the other side of the planet.

For all that, Australia's Big Four banks did not make the S&P list. In fact, in a separate research paper published earlier in the month, S&P noted a shift in the balance of global banking power. It's notable that the only two upgrades were the Bank of China Ltd. and the China Construction Bank Corp.

Now, a more cynical observer might say that S&P is reading the proverbial tea leaves and buttering up its next generation of customers. It's good to make nice with the rising financial power players in China. If you're in the mood for a bunch of charts and analysis, you might want to have a read (or at least a look) at the report in which S&P looks at the "shifting balance in global banking" through its Banking Industry Country Risk Assessments (BIRCA).

We'll give you the short version if you haven't already clicked away: banks in Europe and North America have become less stable since 2006 while Asia-Pacific banks have stayed about the same. Rapid credit growth in China is a concern. But higher savings rates in Asia mean banks have access to larger deposit bases than their counterparts in the developed world.

What does S&P say about Aussie banks? Australia is very "low risk" in terms of its economic resilience and "industry risk" according to S&P. In fact, as you can see from the chart below, Australia ranks just behind Hong Kong and Singapore on the S&P risk assessment. That would seem to be a massive tick. 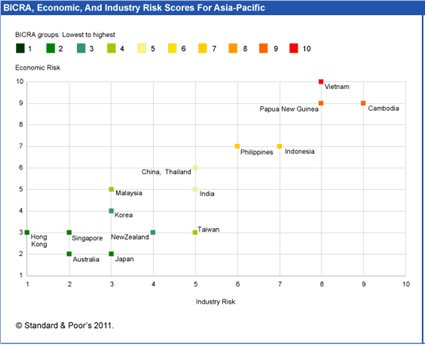 But there are two red flags in the S&P's own analysis that may not fully reflect the risk to Australia's banking sector: China and "system wide funding". Of China, the S&P report concludes:

We believe China represents the most significant future risk in Asia-Pacific. This is owing to the combination of China's "high risk" of "economic imbalances" and "high risk" of "credit risk in the economy", given its sizable economy and connections within the region and the globe.

Meanwhile, S&P is a bit concerned with the "system wide funding" issue for Australia, if not for Asia. It summarizes the case thusly (emphasis added is ours):

We believe "system wide funding" is an area of relative strength for the region, and we assess 10 of the 16 systems as "very low risk" or "low risk". One reason for this is the region's high domestic savings rate, which exceeds 30% of GDP in a number of countries. This is an important contributor to the relatively stable deposit bases that reduce the need for external funding. Two notable exceptions to this general trend are Australia, which we evaluate as "intermediate risk", and New Zealand, which shows "high risk". Persistent and significant current account deficits fuelled by lower savings relative to investment demand and consumption mean these two countries show the lowest level of customer deposits and the greatest dependence on net external borrowings in the region. Nevertheless, we believe these risks are partly mitigated by factors such as supportive central banks, access to sizable domestic debt capital markets (Australia), and support from parent groups (for New Zealand banks).

Well, S&P is certainly right that the Reserve Bank of Australia is "supportive". As we showed yesterday, the Committed Liquidity Facility is a potential way for Aussie banks to offload distressed assets to the RBA if need be (if the assets are, indeed, distressed). And the banks could probably make their affiliates in the super industry buy up a couple of billion Dollars in new bonds at a relatively cheap interest rate, if push came to shove.

The article shows that Australian banks are already paying more to borrow than their non-financial corporate peers. For example, the yield on a five-year note from Westpac has increased by 20 basis points to 56 over a similar maturity security from Woolworths [Ed note for UK readers: Australia's Woolworths is not to be confused with the British one...].

This is hardly a crisis, yet. But it does make sense. In a credit depression, businesses that need to borrow to increase sales are not going to grow as fast, if they manage to grow at all. It's true that Aussie banks might be able to source new borrowing from higher deposits as savings rates in Australia go up. But who will do the borrowing?

On the other hand, a business like Woolworths is less dependent on borrowing money to increase sales. Those are the kind of businesses you want to look at in a credit depression. You want businesses that have very high returns on capital without having to resort to increasing leverage.