END_OF_DOCUMENT_TOKEN_TO_BE_REPLACED

It was the monetary equivalent of "shock and awe"...

Bank governor Mervyn King and his colleagues had been expected to push up rates in February, but by ambushing the markets with a January move to 5.25%, they may have hoped to make more of an impact.

"The margin of spare capacity in the economy appears limited. It is likely that inflation will rise further above the target in the near term. The risks to inflation now appear more to the upside," the BoE – also known as the Old Lady of Threadneedle Street – explained.

But London’s FTSE100 index all but shrugged off the rate hike. It suffered a 30-point fall to as low as 6,140 just after the announcement, but then closed the day 70 points higher. After stabilizing above the 6,200 level, the Footsie tacked on another 5% gain to 6,450 last week.

It wasn’t so long ago that even a hint of an interest rate hike sent traders scurrying for the hills. So clearly, like everything else, the markets are putting a positive spin on what would normally have been a nasty surprise. The fact is that interest rates have been too low for too long, and few traders take the BoE seriously.

But bringing the UK economy back into balance will unfortunately require a lot more discomfort than the slap delivered by Mervyn King and his chums last month. 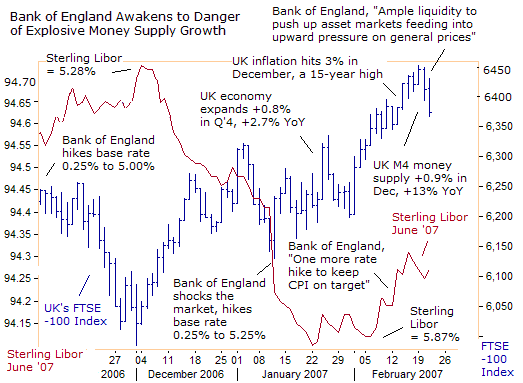 For the past four years, the BoE pursued the most radical monetary policy among the Group of Seven central banks, pumping up its money supply to inflate British home prices and the local stock markets. UK home prices rose 10.5% last year, according to Nationwide, a UK home-loan provider, while the UK’s Footsie index climbed above the 6400-level in mid-February to its highest in six years.

But after the UK’s M4 money supply expanded by 0.9% in January to stand 13% higher from a year earlier, the Bank of England issued an unusual confession of its past sins.

"Investors are likely to take advantage of this ample liquidity and the associated easy credit to purchase other assets, driving risk premiums down and asset prices up," the BoE told parliament’s Treasury Committee on Feb 20th.

"In due course, those higher asset prices may be expected to feed through into higher demand for goods and prices, putting upward pressure on the general price level," the BoE concluded.

Still, there are plenty of signs of complacency in the FTSE100 Index, with Sterling Libor futures for June delivery yielding 5.75%, and discounting the possibility of two more BoE rate hikes in the months ahead. 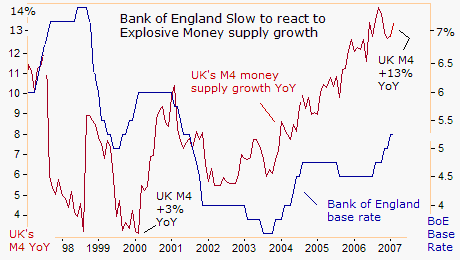 Years of monetary abuse by the BoE are finally coming home to roost. In order to get a handle on the explosive M4 money supply, the BoE would probably have to hike its base rate by at least 75 basis points to 6%, far above the 5.25% US fed funds rate and the BoJ’s 0.50% rate. That could put more upward pressure on the British Pound against the Japanese Yen and US Dollar. 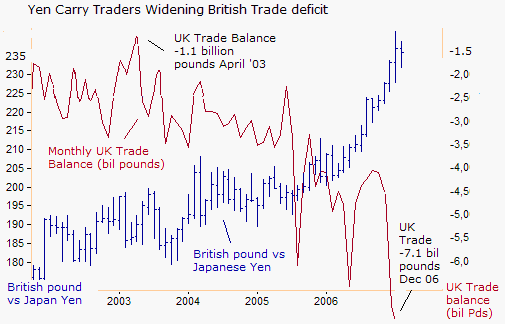 The massive deterioration in the UK trade balance has been accompanied by the British Pound’s rise to ¥235, its highest in 14-years. British manufacturers will find it hard to compete with their Japanese competitors, who enjoy a cheap Yen, and super low interest rates at home. Yet if the BoE aims to tackle the explosive M4 money supply by lifting its base rate, without similar rate hikes by the Bank of Japan, it could wreck further damage on Britain’s export sector.

How far would the BoE go to contain its money supply and prevent the emergence of asset bubbles? “British interest rates will probably need to rise one more time to keep inflation on track to hit its 2% target,” the Bank of England signaled on Feb 14th. Yet one week later, the BoE ratcheted up its hawkish rhetoric by focusing on the explosive growth of M4.