END_OF_DOCUMENT_TOKEN_TO_BE_REPLACED

Stock-market valuations stand near record highs on the P/E Ratio...

"The last time that [America] had no government debt, you had a Scottish president. His name was Andrew Jackson. Not only did he pay off the national debt, he also abolished the central bank and tried to close down all the commercial banks."

I HAD THE GOOD fortune to attend a speech by Russell Napier last week, writes Dan Amoss in The Daily Reckoning.

Napier is a stock market historian. But he's not just an ivory-tower academic; he operates on the front lines of the investment management business as an analyst for the brokerage firm CLSA. Napier's been in the trenches of the global financial markets for several decades.

Napier's speech, which echoed themes from his excellent book, Anatomy of the Bear, stressed the need for investors to understand the long-term trends in stock valuations.

Secular, or long-term, bull markets are best defined as a period of rising valuations, he explained, while bear markets are the opposite. Near bull market peaks, investors become so optimistic that they pay silly earnings multiples for stocks. A simple way to view a P/E multiple is the "payback period" for the return of the capital you part with in order to buy a stock. The higher the starting PE ratio, the longer the payback period.

Napier's discussion of cycles in stock market valuation is based on the work of Yale Professor Robert Shiller, and his now-famous "Shiller P/E ratio". The Shiller P/E ratio is calculated as follows: divide the S&P 500 by the average inflation-adjusted earnings from the previous 10 years. 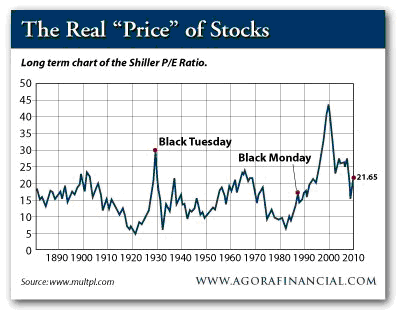 It's the best P/E ratio to use over long stretches of history, because it smoothes out the extreme peaks and valleys in earnings, giving a better framework for thinking about future S&P earnings power.

Valuation is the main reason why I expect the bear market to last several more years into the future – probably somewhere in the 2015- 2020 timeframe. I think we'll get there through some combination of falling stock prices and modest earnings growth.

Rapid earnings growth, along with rising valuations, drove the great 1982-2000 bull market. The sprint up to the 2000 peak was, in hindsight, the biggest stock market bubble in history. History shows that bubbles are nearly always corrected over very long periods. The next decade will surely be especially turbulent, because that's when markets and politics will sort out what the inevitable train wreck in the US entitlement programs will look like.

How much will entitlement promises be financed by currency debasement? How much are Baby Boomers willing to sacrifice in terms of medical rationing? Or higher retirement ages for Social Security? These are the big questions of our time. The one thing that's certain is that it won't be painless. Most entitlement recipients expect a standard of living that the welfare state can simply not afford.

In his speech, Napier's dry humor nailed the situation: "For 120 years, the US borrowed money to kill people [in wars]. Now, it's borrowing money to keep them alive."

In statistics jargon, the "r-squared" of this variable, in explaining valuations, was 0.79. That's very high, meaning the demographic trends are important in determining long-term stock market returns. Over the next several years, the number of 40-year-olds will decline, due to the lower birth rates between the Baby Boomers and the Boomers' kids. So the Shiller P/E ratio is very likely to fall.

Napier's talk concluded with his outlook for stock valuations. He said, "I fully expect to be here in five or six years telling you to buy US stocks at 6 times earnings – at a time when the geopolitical decline of America is on the front page of every newspaper; at a time when you have capital controls; at a time when the government is manipulating the debt market."

Buying Silver today? Cut out the middleman and slash your costs – without compromising safety – by using BullionVault...