END_OF_DOCUMENT_TOKEN_TO_BE_REPLACED

COMMODITIES as a whole had a mostly positive 2019, writes Frank Holmes at US Global Investors.

Precious metals were responsible for much of the growth. For the third straight year, and for the fourth time in six years, palladium was the top-performing commodity. The metal, used widely in the production of catalytic converters, increased an incredible 54.2% to end 2019 at $1912 an ounce, a slightly higher price than gold's all-time high set in September 2011.

As was the case in past years, palladium benefited from mounting global demand to curb emissions from gasoline-burning engines. It's also among the world's scarcest precious metals, mined primarily in Russia and South Africa, which means supply will potentially remain in deficit for years to come.

Having broken above $2000 an ounce last week, palladium in now forecast by Citi analysts to hit $2500 by the middle of this year.

Gold, meanwhile, had its best year since 2010, climbing as much as 18.3%. The yellow metal's role as an exceptional store of value shined brightly in the second half of the year when the pool of negative-yielding debt around the world began to skyrocket, eventually topping out at around $17 trillion in August. On the news last week that Iran launched a counterstrike against US-occupied military bases in Iraq, the safe haven briefly broke above $1600 an ounce for the first time since April 2013.

In the past two decades, gold has helped investors limit market volatility and portfolio losses. Between 2000 and 2019, the precious metal's average annual price was down in only four years. Put another way, gold was up on average in four out of every five years – a remarkable track record. 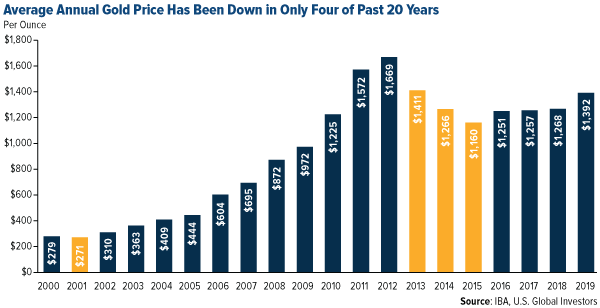 Safe haven-seeking investors around the world piled into gold-backed ETFs in 2019, making it the best year on record for gold holdings. Assets under management (AUM) in gold bullion ETFs expanded 37% from the previous year, adding $19.2 billion, or 400 tonnes, according to the World Gold Council (WGC). During the fourth quarter, total holdings hit a jaw-dropping 2,900 tonnes, the equivalent of 102 million ounces, which is the most on record.

As of the end of last week, gold looked slightly overbought on a relative strength basis, meaning a correction wouldn't be such a bad thing.

Short of escalating tensions in the Middle East or a pullback in stocks, the catalyst for higher gold prices – and, indeed, commodity prices in general – may very well be a substantial weakening of the US Dollar. Last Tuesday the US Dollar Index experienced a "death cross", a bearish signal that takes places when an asset's 50-day moving average crosses below its 200-day moving average. We haven't seen this from the greenback since May 2017. 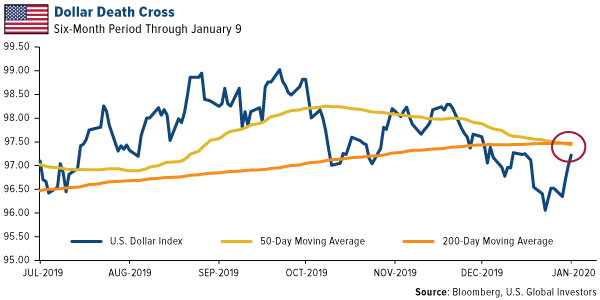 Other firms and analysts have recently made the case that the Dollar is ready to decline in 2020, which would give gold and other hard assets the room to gain momentum. Below are just three such forecasts from the past couple of weeks:

"Our view is that the Dollar is ready to decline in 2020 and will be encouraged to do so as negative interest rates abroad turn less negative while the Fed holds pat (or cuts)...In the event of an unlikely recession in 2020, US fiscal and monetary policy will turn sharply expansionary, the Dollar will decline further, and gold will do well."
- Murenbeeld & Co., January 3

"We expect that US Dollar weakness will likely characterize global financial markets throughout 2020...A weaker Dollar is always good news for commodity prices. We are particularly bullish gold at this point. Gold is a direct play on a weaker Dollar and could also benefit from any major flare-up in geopolitical tensions."
- Alpine Macro, January 6

"Starting 2020, the key setup from a macro perspective is the confirmed top in the US Dollar Index as well as the US Trade-Weighted Broad Dollar Index...The US Dollar Index (DXY) has broken below the 97 support to trigger the bearish implication of the June-December topping pattern (head-and-shoulders top) and the US Trade-Weighted Broad Dollar Index has broken below the early-November 2019 low as well as the 200-day moving average to confirm a similar topping pattern to the DXY."
- CLSA, January 7

Gold isn't the only asset that responded positively to geopolitical uncertainty involving Iran.

The price of Bitcoin, the world's largest cryptocurrency by market cap, surged on the news that President Donald Trump had ordered a strike on Iranian general Qasem Soleimani, before commenting that the US was targeting as many as 52 sites in Iran. 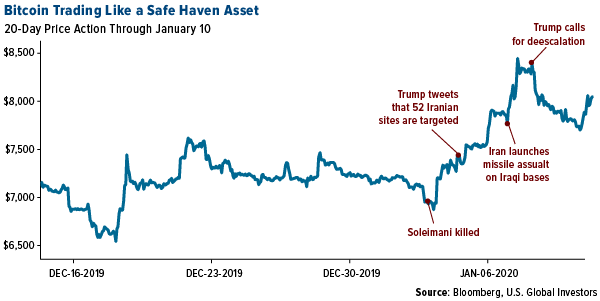 From January 2, the day before the strike, to January 8, when Trump announced that Iran appeared to be "standing down", Bitcoin traded up as much as 21% to its highest level in six weeks. In addition, there were reports that local Bitcoin sellers in Iran were charging three times the market rate in response to the threat of war with the US.

Google searches for "bitcoin" were also up. Cointelegraph reports that the search term "bitcoin Iran" exploded more than 4,450% in the seven days through January 8.

All of this tells me that Bitcoin continues to mature as an asset, and that investors and savers increasingly trust it as a store of value in times of uncertainty.