END_OF_DOCUMENT_TOKEN_TO_BE_REPLACED

IF YOU'RE a precious metals investor, then you should be heartened by what's going on beneath the surface in China, writes Addison Wiggin for the Daily Reckoning.

China has raised its reserve requirements for banks yet again. It's the fifth time this year, and the eighth since last October.

When the new rule kicks in next Wednesday, banks will be required to keep a record 21% of customer deposits in the vault or at the central bank.

It's no surprise – not after April consumer prices clocked in at an annual 5.3%. But it feeds the meme that China's about to slow down at a time industrial production and retail sales here are already starting to run out of steam.

"We saw buying when gold dipped below $1,500 from China, India and Indonesia," an anonymous Hong Kong-based dealer tells Reuters, "but not much scrap selling, as people are still bullish on gold."

This corroborates Richard Russell's notion – there's a "Chinese put" under gold. "Whenever gold corrects a bit, China is there loading up on whatever is available."

Sure enough… Gold crossed $1,500 for the first time three weeks ago. Whatever dips have come since then have been shallow, and brief: 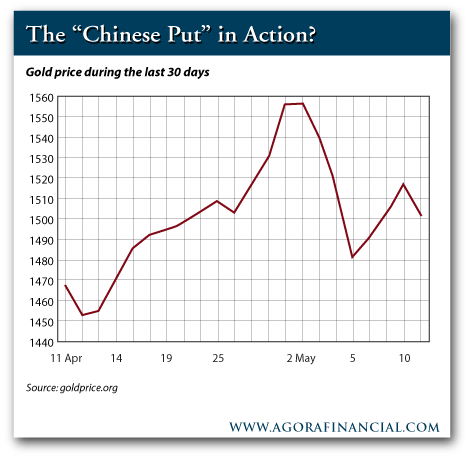