END_OF_DOCUMENT_TOKEN_TO_BE_REPLACED

Why a fractional Gold Exchange Standard looks unlikely during the switch...

WE FEEL IT inevitable that – in line with the World Gold Council-sponsored OMFIF report on the subject, from which we will quote freely – gold will move to a pivotal role in the monetary system over time, writes Julian Phillips at GoldForecaster.com.

There is a tendency among analysts and academics to believe that academic theory will override the final changes that the monetary system will bring about. The reality of the matter is that theory will be made to bend to suit governments and their interests and then an amalgam of the interests of the most forceful nations trying to dictate such changes. This may not reflect academic wisdom but the opinion of the most powerful nation's interests.

With this in mind it is good to look at these interests and see whether there can be an accord that will work in the global monetary system. A look at some features of the system that currently holds sway helps us to see the pressure points that lie ahead.

The first stumbling block is the International Monetary Fund. This is dominated by the US voting power of 16.83% whereas 85% of votes are needed to pass a resolution there. It's unlikely that China will accept a continuation of the US control of issues that may deeply affect the Chinese. So a removal of the United States' overriding power must be on the cards.

If that is not to happen, then what we're seeing already among the emerging nations (the BRIC nations) led by China, where they have proposed institutions that could take on the IMF and World Bank roles as an alternative to these western controlled institutions, will move to completion. After all, it is unlikely that the US would willingly relinquish the power it has, let alone in favour of China.

While China has openly expressed an interest in widening the definition of the Special Drawing Right, the invention of the IMF, it is unlikely that the US will be happy to see it linked to gold and with the Yuan becoming an important component of it. So far, China's reaction has been to walk its own road and not to bow to the dictates of the US.

To emphasize that point we must be clear that China will claim as much power and control over the monetary system that its coming position in the economic tables of the world describes. Furthermore, China will want to have a similar degree of financial power as has been exercised by the US for generations.

These interests are described in financial terms as China will want to improve the return on Chinese savings. Emulating the 'exorbitant privilege' of the Dollar, under which China can absorb capital inflows from abroad at a relatively low interest rate and reinvest these as productive foreign assets earning a much higher return, has become an aim espoused by many Chinese economists and academics.

The Chinese authorities distinguish between means and ends. The overall aim is not just attaining reserve currency status. Rather, it is optimizing China's economic power, resilience and prosperity. The internationalization of the currency is a means to that end, and the chosen routes are through increasing the use of the currency in trade and investment between China and the rest of the world, and the opening up of a carefully-controlled offshore Yuan market to facilitate that aim.

If central banks take a more active interest in gold bullion, they're likely to be imitated by private sector investors, de facto diminishing the amount of extra gold available as reserves. This set of considerations makes it unlikely that gold could re-emerge as a significant threat to fiat currencies, in the sense that it could replace them in a systemic way.

The relative scarcity of gold means, that it could only ever replace a fiat currency on a fractional basis; however, even such a system is unlikely. That worked during the Gold and Gold Exchange Standards mainly because politicians and markets had faith in them. When that faith broke down in 1914, the early 1930s and then finally in the early 1970s, the system could no longer be maintained. Precisely because of that experience and of the constant temptation for politicians to manipulate a standard to their short-term advantage, we will probably never see the return of a fractional Gold Standard.

The flexibility, for better or worse, of fiat currencies makes it unlikely that all politicians – including China's – will accept abandoning them. The future monetary system will have to be pragmatic, bowing to the most influential of national politicians so that the current monetary system will be made to continue albeit with such changes that allow China and its currency to dovetail into the system that we already have.

This means a continuation of the increase in distrust of politicians, founded on suspicion that they, or central bankers, are debasing the currency. Naturally this will increase the attraction of gold as a hedge against all currencies. While politicians will continue to bow on this subject to the central banks allowing them to be independent of government, national interests will override international ones. It's because of this set of strains that gold could become so important in the monetary system, in terms of individual national credibility that it becomes in the national interest to harness the entire gold stock within the borders of a nation.

Certainly if China decides that it is to its advantage to build a substantial store of gold, then it will ensure it can be used to lessen liquidity constraints, internationally and mollify currency crises that emanate from them.

We believe that it may well insist that other nations use their gold in the same way.

The only way this can be done effectively, is as we and OMFIF mentioned in the first part of this article: use gold as a form of 'value anchor' indexing currencies to gold. We see this as being somewhat brutal on some nations making them look at the realities of their currency's value, but also reinforcing the monetary system as a whole.

Progress in the Yuan's international use has been concentrated on trade invoicing and settlement. In the first half of 2012, the Yuan's share of China's overall cross border receipts and payments stood at around 11%, up from around 7% in 2011, and only 2% in 2010. Yuan flows into China for foreign direct and portfolio investment increased threefold compared with a year earlier. The authorities have built up a Yuan clearing agreement between Hong Kong and the mainland to reflect the growing pace of economic integration and de facto Yuan convertibility between these two areas. This has accompanied a sharp increase in volumes of Yuan held and traded in Hong Kong, although the amounts levelled off during the latter part of 2012. 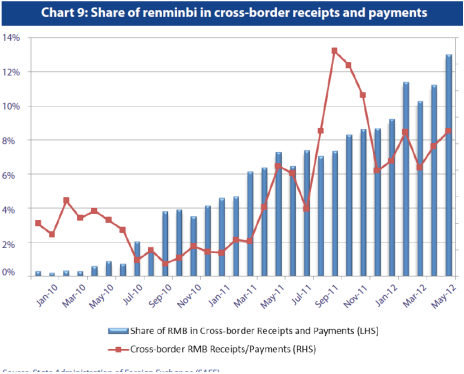 The People's Bank of China has signed Yuan swap agreements with foreign central banks, including Japan, South Korea, Hong Kong, Singapore, Iceland, Argentina and Australia, to provide Chinese currency liquidity to local markets abroad. Between 10 and 15 central banks own mainly small volumes of Yuan reserves through agreements with the People's Bank. Most of the reserve-holding is concentrated on Asia.

According to the People's Bank of China holdings also extend to Africa, Latin America, Europe and Middle East. Notable non-Asian central banks to hold Yuan reserves include the Central Bank of Nigeria (where the governor announced in 2011 that 10% of reserves would be eventually held in Yuan) and the Austrian National Bank (the first European central bank to invest in the Chinese currency). Other leading European central banks have made clear that they will not contemplate Yuan ownership until the currency is fully convertible.

The Chinese authorities may be prepared to make use of a number of opportunities to expand international use of the Yuan in a way that goes beyond invoicing and settlement for trade and investment. One idea put forward by Chinese economists with close links to the authorities is that China should encourage both its own borrowing entities as well as indebted western nations to issue bonds in Yuan specifically destined to be held in foreign countries official reserves.

If that were the case, China would have to proceed to full Yuan convertibility.