END_OF_DOCUMENT_TOKEN_TO_BE_REPLACED

Wise to make contingency plans now, before the Yuan shock hits the Dollar...

The CHINESE AUTHORITIES have signaled they are going to propose plans this year to allow freer flows of the Yuan, writes Julian Phillips at the GoldForecaster, both in and out of the nation.

This is part of measures to loosen control over both the Yuan and China's commercial interest rates. It was expected that full and free convertibility would be in place after 2022, but it's clear that the program is now moving at an accelerated pace. How far this next phase of convertibility will go has to be seen at the end of this year.

It's understandable that the process will be gingerly handled, so as to dovetail into the currency world without causing crisis. We have to always remember that China will do what suits China and not the outside world. But the inescapable conclusion we have to reach is that the Yuan is set to replace the US Dollar to a greater or lesser extent as it arrives on the world stage. This will inevitably lead to more global uncertainty and instability as Dollar hegemony is cracked and more volatility batters the currency world. Market reactions could well discount the future and cause premature reactions that, we believe, will benefit gold.

We feel it is inevitable that – in line with the World Gold Council sponsored OMFIF report on the subject – from which we will quote freely, that gold will move to a pivotal role in the monetary system over time. It is the beginning of substantial structural changes to the global financial system and in particular to the gold world.

This will happen at a time when the developed world's financial system is at a structurally weak stage, struggling to precipitate economic growth. It is certainly time to stand back from a local national perspective and extrapolate the global economic and financial currents. We believe that the demand for gold and silver will find another facet in the growing monetary role precious metals will play in the future.

The world is preparing for possible twin shocks from the parlous position of the two main reserve currencies: the Dollar and the Euro. As China weighs up its options for joining in the reserve asset game, gold, the official asset that plays no formal part in the monetary system yet, has never really gone away and is poised, once again, to play a pivotal role. Many dismiss gold as a relic of the past or as an inadequate hedge against inflation. But from an asset management point of view, as well as on the basis of political analysis, gold has a lot going for it. Most especially, it correlates negatively with the US Dollar, and no other reserve asset seems safe from the coming US Dollar shock.

If the specter of collapse continues to haunt the main reserve assets, and on the expectation that the Yuan will take time to get into its stride, then the world will rush to safe havens as currency pressures mount. With the expanded convertibility of the Chinese Yuan due by the end of this year, it would be wise to draw up contingency plans now, for such eventualities.

Gold may be the only reserve asset with the requisite size, clout and history to help ward off the strains that will beset the world monetary system from 2014 onwards.

Let's look at the main features of this time of transition now taking place.

The West has been assailed by the longest-running economic crisis since the 1930s, undermined by the shift of manufacturing from West to East, shifting wealth in the process. In the past the developed world enjoyed 80% of the world's income, while hosting 20% of its population. By 2020, according to Wolfensohn, the ex-head of the World Bank, this will change to 35% of the globe's income going to the developed world and 65% of it going to the emerging world and so weakening the natural pull of the US and European currencies.

Emerging nations, led by China have amassed huge surpluses in the form of massive monetary reserves that have become the most potent factor behind reserve diversification into other assets, including gold. The I.M.F.'s belated recognition in December 2012 of the occasional need for temporary capital controls demonstrates how dealing with world imbalances in a way consistent with emerging market needs has become a new force in international policy thinking. 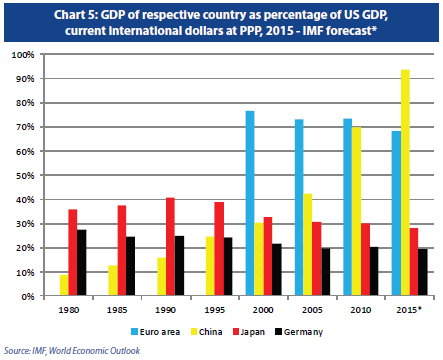 The Chinese have followed a careful preparatory course for the Yuan to take on this reserve currency role, developing its banking system to facilitate this alongside the signing of many trade agreements (with the UK, Australia, Brazil, etc.) in which the Yuan will be used to the exclusion of the US Dollar. Now it is to be a currency independent of US-oriented currencies and acting solely in the interests of China.

Critically the sheer size of the China-oriented trade bloc Asia – now the world's second largest and moving to first position, possibly as early as 2016 – is coming into a position to dictate to the rest of the world the monetary system acceptable to the east. It's clear that China does not want to 'fit into' the present monetary system skewed to the retention of the United States' hold on political, economic and financial supremacy. As an empire on the rise, it's avoiding the pitfalls of rising through the ranks and will set its own standards that it hopes will be powerful enough to make others follow.

With the last 42 years of trying to dismantle gold's position as effective money, it remains recognized as an important monetary asset in the global monetary system. The 40-year experiment with unbacked currencies, designed to reinforce and make useful the power of the developed world, globally, is stumbling, for a variety of reasons. In so doing it has left gold ready to fill the vacuum created by the evident failings of the Dollar and the euro, and the not-yet requited ambitions of the Yuan. 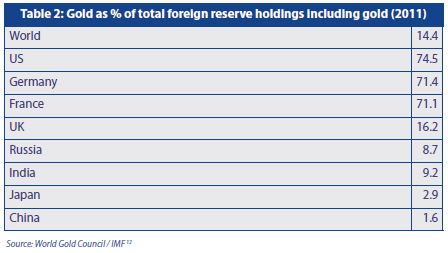 For gold prices, it's not important that China fulfil its ambitions. What's relevant are the changes in the balance of power, both economic and financial, that will precipitate stresses and strains, making the use of an internationally-respected and valued asset critical to retain continuity in the global monetary system.

With China using an agency to buy not only local production of gold (the largest in the world now) and encouraging its own citizens to buy gold, we've already seen an ongoing propensity towards building up stocks of monetary gold, reflecting their cultural attachment to it that goes back millennia, is itself a powerful factor in the equation.

The role that gold would have to play would have to be consistent with the ambitions and dictates of first China then accepted by the developed world in its attempts to hold onto the advantages of globalization and international trade. We would see some form of indexation of currencies to gold, or if acceptable to the Chinese, then to the Special Drawing Right (SDR) and its components. In this way gold would act as a "value-anchor" initially suggested by the World Bank head Robert Zoellick.

Gold would not need to be paid out, but its Dollar or Yuan or Rouble equivalent, which would be based on the currency value against gold at the time. As such, gold prices would act as the measure of value against which all currencies fluctuate.

If gold is kept in the wings of the monetary system the world may face a huge liquidity crunch if a combination of US and European shortcomings and the natural ambitions of Asia produce an attack on the major currencies. This would open up large holes in the framework of the world's reserve currency arrangements.

With the advent on the world stage of the Yuan, the international community will be forced to take on these challenges, either willingly ahead of currency crises or in the midst of them. We feel that political pressures will lead to a recognition of these changes only in the midst of crises, or "currency wars" that lie ahead of the world from 2014 onwards.

The unavoidable conclusion one can reach as to the future is that the world is headed towards the uncharted waters of a durable multi-currency reserve system, where the Dollar will share its pivotal role with a range of other currencies, including the Yuan. Historical precedent and the underlying principles behind asset diversification indicate that the coming time of flux and uncertainty for worldwide reserve management will be a period when reserve holders spread their investments into a relatively wide range of assets and sectors.