END_OF_DOCUMENT_TOKEN_TO_BE_REPLACED

THIS is different. This is what the experts say, writes Arkadiusz Sieron at Sunshine Profits.

This is what some pundits claim. Are they right?

First of all, many doubt whether we can really trust any signals sent by the yield curve, given that the central banks intervened so heavily in the bond markets in the aftermath of the Great Recession. When short-term interest rates reached almost zero, the Fed started to buy many securities to lower their long-term yields, which flattened the yield curve.

So it might be the case that without the US central bank's impact on the bond prices, the yield curve would be steeper or even not inverted. In other words, it might be the case the yield curve is inverted only because the long-term rates are artificially compressed. If true, the yield curve can be inverted even if short-term interest rates remain stimulative to the real economy (they are not above the 'true' level of long-term yields which reflect the neutral rates) and thus are not serving to depress activity.

While this reasoning is plausible, there are two problems with it. First, the Fed ended its quantitative easing program long ago, and it has more recently been conducting quantitative tightening. Second, there is a lot of uncertainty around the effects of QE on interest rates. Hence, as the San Francisco Fed economists noted:

"There is no clear evidence in the data that 'this time is different' or that forecasters should ignore part of the current yield curve flattening because of the presumed macro-financial effects of QE."

But as the chart below shows, financial conditions remain easy, as signaled by negative readings on the Chicago Fed National Financial Conditions Index (blue line, index). The yield curve is shown in green (and shows the spread between 10-year and 3-month Treasuries, monthly averages, in percentage points). 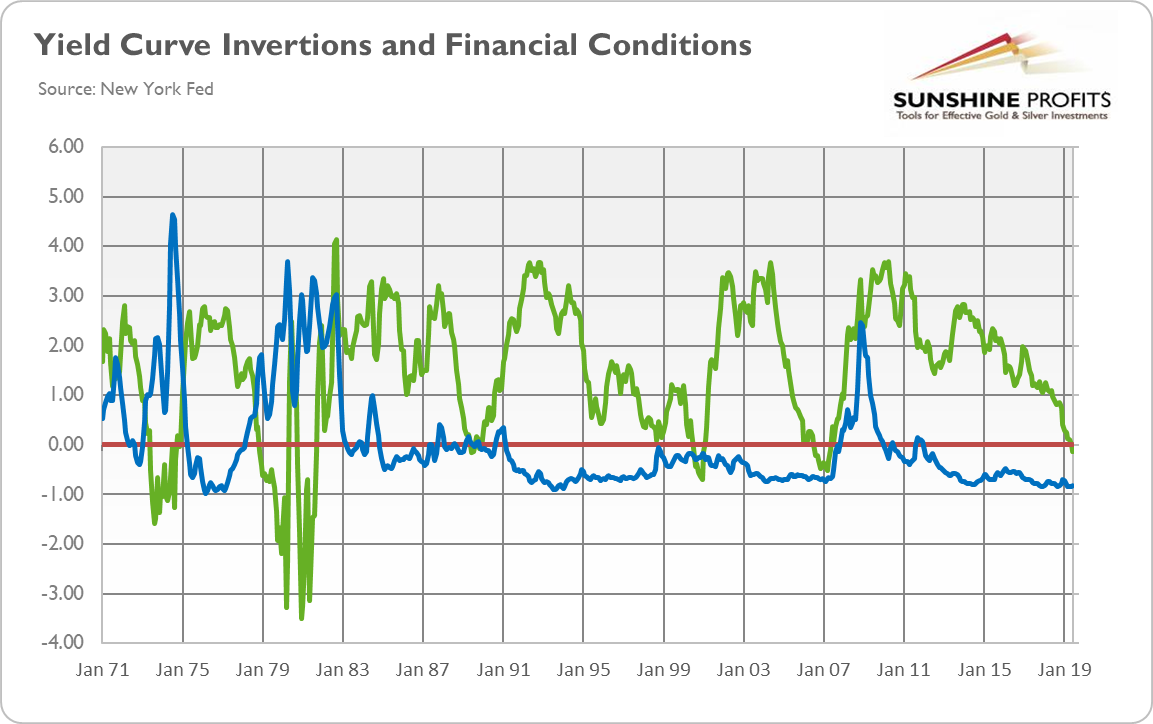 However, financial conditions are very often a lagging indicator, as banks turn off the credit tap only after a crisis has begun. Liquidity is an illusory concept. It may seem to be abundant and always just there, but when market stress occurs, liquidity often disappears.

Please take one more look at the chart above. The financial conditions index last became positive, ie, tighter than on average, only in November 2007, just one month before the Great Recession officially began. And during the 2001 recession – which occurred after the bursting of the dot-com bubble – US financial conditions remained easy all the time!

Third, what about the reason behind the recent inversion of the yield curve? In the April edition of our Gold Market Overview, we pointed out that the March inversion of the yield curve happened not because the short-term interest rates rose abruptly, as the Fed tried to stop the economy overheating and prevent inflation, but because long-term bond yields declined as investors became more pessimistic and started to expect interest rates will be lower in the future.

We were right. The immediate reason behind the March inversion was the drop in long-term interest rates, as the chart below clearly shows  (green line is 10-year Treasury yield, red line is 3-month Treasuries). 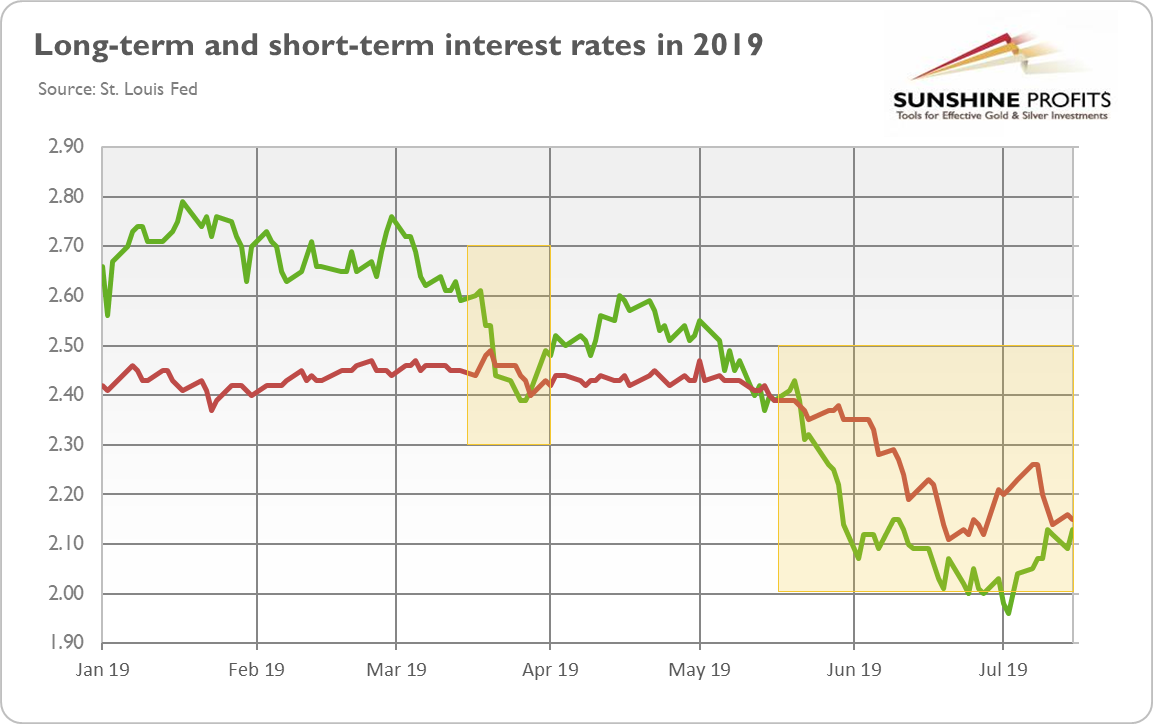 The same applies to the May inversion. Actually, that case was even more counterintuitive, as the short-term interest rates declined, not rose! The yield curve inverted because long-term yields plunged even more.

However, everything makes sense if we adopt a long-term view. So, let's take a look at the next chart, zooming out the bond yields. As one can see, the long-term interest rates remain in the sideways trend, while the short-term interest rates increased substantially since 2015 when the Fed started its tightening cycle. 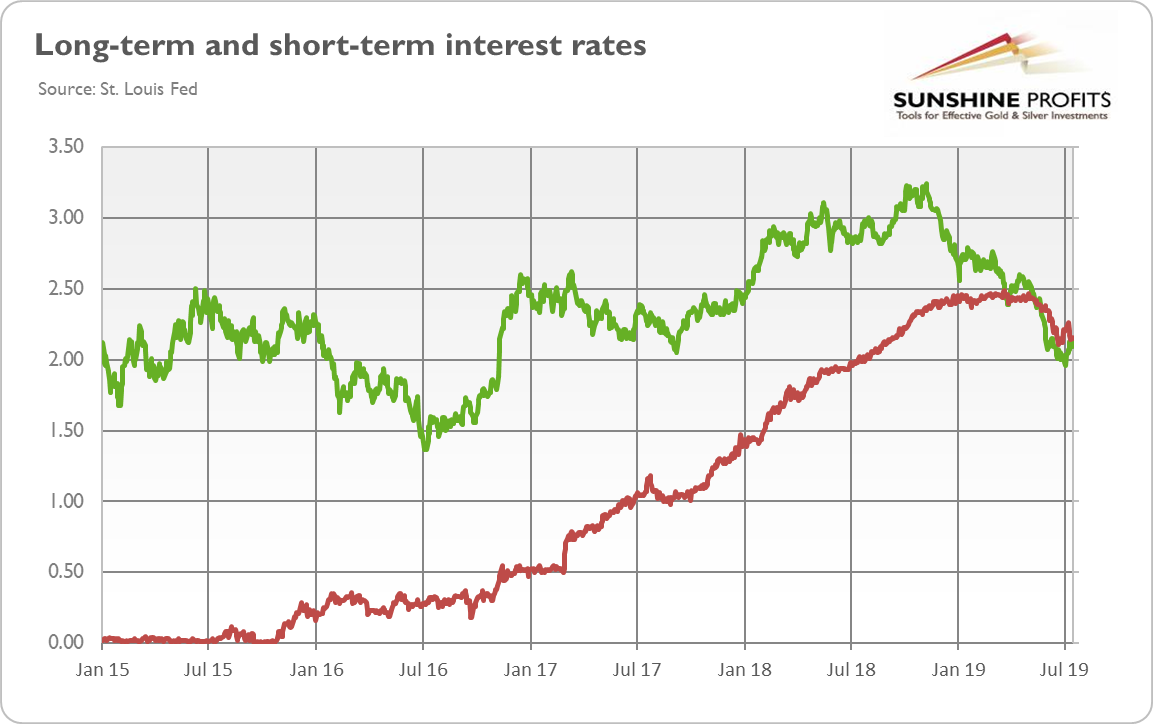 Everything fits the standard theory of the yield curve inversion. According to the San Francisco Fed's paper we've already cited, inversion predicts an economic slump, regardless of the driver. In other words, only the difference between the interest rates matters for recession predictions.

The future cannot be guaranteed, but the past shows that each time the pundits reassured us that 'this time is different', they were wrong. As long as the yield curve remained flat but positive, we downplayed fearmongering about any imminent recession. When the yield curve inverted shortly in March we were disturbed, but still far from panicking. But when the key spread, calculated on a daily basis, dived deeper into negative territory and for longer in May, while the monthly average inverted in June, we had to acknowledge that the recessionary odds in the US several months ahead increased substantially.

Precious metals investors should act accordingly, adjusting their portfolios to the heightened risk of recession.