END_OF_DOCUMENT_TOKEN_TO_BE_REPLACED

Gold looks good after yield curve inversion...
The YIELD CURVE just inverted deeper than August 2019, writes Gary Tanashian in his Notes from the Rabbit Hole.
Now, what does it mean?
Well the first thing it usually means is not to panic (especially now that High Yield credit spreads are easing), but do tune out the media hype about it because it is not the inversion that tends to signal an economic bust but instead the steepening that follows it.
Among the important questions are how long will it remain inverted and how deep will the inversion go before the next steepener?
Here is the latest post-payrolls data move (up 431,000) as the bond market demands that the Fed get off its ample behind and get with the inflation making nasty headlines as it cost-pushes across the economy while the Fed and the long end of the curve lag well behind.
But the Fed is probably lagging for a reason and one major reason could be that they see the curve, they know what comes next, and it's not pretty.

The Yield Curve inversion in 2019 was just a tick into sub-zero. Past inversions have gone deeper than that before turning up and signaling an economic bust, among other things (the 2020-2021 steepener was purely inflationary).
So maybe today's Yield Curve has some unfinished downside flattening business to see to. Now that I think about it, was that secondary dip in early 2020 going to keep diving to a deeper inversion before the pandemic came about and drove the economy into a flash bust (against which the Fed inflated like all get out)?
It is important to remember that a curve steepening can be driven by inflationary (ref. 2019-2021) forces or deflationary forces. In 2007-2008 for example, the steepener was driven by both. First as crude oil gained the headlines and commodities peaked, and then during the subsequent crash as the inflation trades along with most everything else (but Treasury bonds, USD and eventually, gold) got destroyed.
That curve steepened under both macro backdrops. 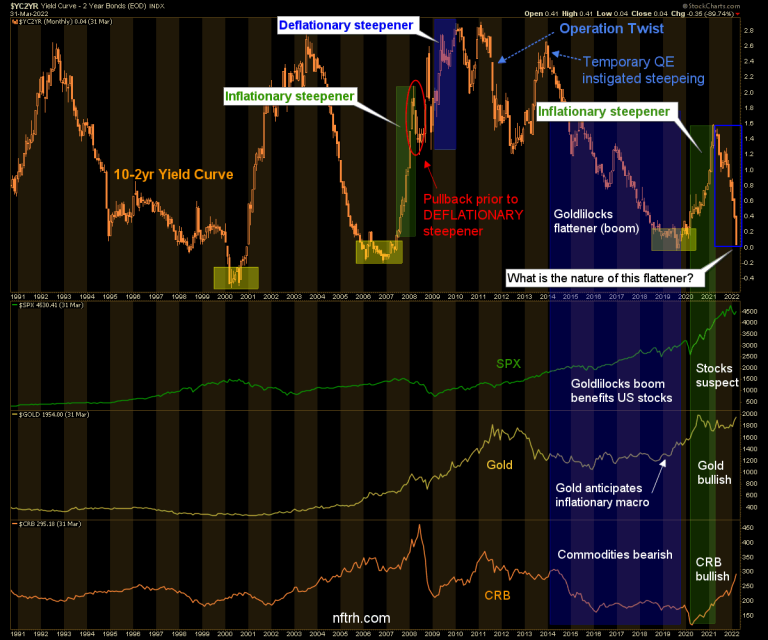 Will the next steepening be inflationary?
I would not bet on it, given that this most dynamic phase of the inflation trades has come against an impulsive flattening. As noted in a recent article on the yield curve, gold – with its utilities for capital preservation/liquidity and by far secondarily, for inflation – looks the most bullish from the standpoint of a would-be buyer on this big picture.
That is regardless of its short-term direction, which is still in question.
The options for the coming steepener are a von Mises style Hellflation or a deflationary liquidation of the previous inflated boom. Either of those outcomes favors gold because Hellflation (my word for Crack-up-Boom) would be economically destructive just as would be deflation (gold's main utility is counter-cyclical, which means anti-economy). 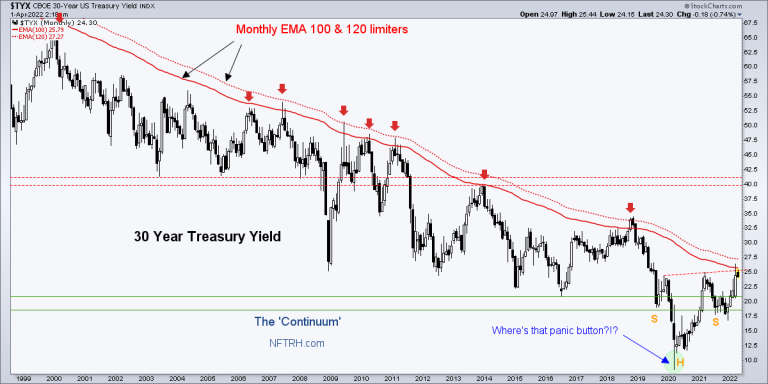 The way markets work however, the odds are for a typical deflationary liquidation of the boom just as an important bond indicator is probing its potential limits. At least that would be the case if what has held true for decades continues to do so.