END_OF_DOCUMENT_TOKEN_TO_BE_REPLACED

A lesson from British history...

RONALD REAGAN summed it up well, writes John Phelan for the Cobden Centre.

"The trouble with our liberal friends is not that they're ignorant", Reagan once said, "it's just that they know so much that isn't so".

If we forgive the Gipper for his misuse of the 'L' word, we can see the truth in his remark. Nowhere do we see it more clearly than in the writings of British journalist Johann Hari, a man who doesn't let his complete ignorance of economics prevent him from spouting off about it.

He was at it again last week when he called the idea that government borrowing of £450 million per day was anything to get worried about 'The biggest lie in British politics'. He revealed an ignorance of history to match that of economics.

Take Hari's claim that "As a proportion of GDP, Britain's national debt has been higher than it is now for 200 of the past 250 years". He challenges us to "Check it on any graph by any historian". 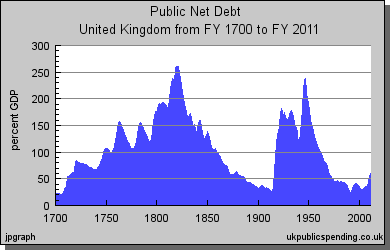 Indeed, you see an awful lot of debt. But if you put in a few historical events you start to get a different picture. Context is everything, as they say.

Starting just before 1700, Britain's national debt does indeed rise at a fair rate. But consider that, in 1694, the Bank of England had been set up for the sole purpose of funding Britain's frequent wars against France.

Indeed, 1815 and the battle of Waterloo stand out clear as day on the graph with Britain's national debt peaking at over 250% of GDP. After that, with the exception of the Crimean war (1853 – 1856) and possibly the Boer war (1899 – 1902), Britain didn't fight a major war again until 1914. Resting on the twin pillars of peace and economic liberalism the British economy grew and the national debt collapsed.

The story in the twentieth century is similar. Debt rocketed when we went to war in 1914 and again in 1939.

So yes, in the narrow sense Hari is correct, our debt is low compared to 1815 or 1945 and many of the years after those dates. The difference, as some basic history shows, is that back then we had the defeat of tyrants like Louis XIV, Napoleon and Hitler to show for it, now we just have a bloated public sector and engorged welfare state.

This is where the claim made by Hari and others that our debt is not so bad historically is thoroughly disingenuous. There is a world of difference between running up debt to stop the country being conquered by Nazis and running up debt to insulate an already well-funded public sector from the effects of a recession which has ravaged the private sector.

It's not a difference supporters of vast government spending are able to see. Taking their cue from the Spender in Chief, former British chancellor and prime minister Gordon Brown, they think that any money spent by the government is investment, which is a good thing.

But 'investment' and 'government spending' are not interchangeable terms. Investment has a quite specific meaning; it is capital, usually money, put into an enterprise with the expectation of a return in the future. Thus, government building a road or improving education is investment.

Government paying out for public sector workers to retire earlier than their private sector counterparts, for people to live in expensive houses in Kensington, for top rate tax payers to receive Child Benefit or teenagers to download music for their iPods is not investment. It produces no return. It is just spending.

We are not fighting a world war so there is no justification for wartime levels of debt. Not all government spending is a good thing. This shifty argument is yet another desperate cry from people who still don’t want to give up their belief in visits from the Money Fairy.