END_OF_DOCUMENT_TOKEN_TO_BE_REPLACED

A "lost decade" for stockholders, but a bonus-rich Marxism for bankers...

SAY IT AIN'T SO! begs Eric Fry, reporting from Laguna Beach, California for The Daily Reckoning.

The Dow Jones Industrial Average just slipped into the red for the year, the decade and century...all in one week!

The Dow tumbled 213 points last Thursday, dropping its performance for the New Year (and new decade) into negative territory. Add Friday's 216-point loss, and the Industrial Average dropped more than 500 points from last week's peak, some 5.1%, and also increasing the Dow's loss for the century-to-date to about 9%.

"Stocks for the long haul" may still be a valid investment strategy, but the haul keeps growing longer.

That's not ideal. Very few companies are reporting profit growth without also reporting expense reductions. In other words, they are "growing" by shrinking. Even Goldman Sachs, America's greatest state-sponsored enterprise, is relying on expense reductions to boost reported profits.

Former investment bank, Goldman did not merely utilize its government-subsidized financing to book record fourth-quarter profits. It also trimmed its bonus-pool payouts. "In a surprising concession to the public outcry over big Wall Street bonuses," the New York Times explains, "Goldman broke with the long- time industry practice of earmarking roughly half of its annual revenue for compensation...

"Indeed, the bank did the unthinkable for the final months of 2009: It subtracted about $500 million from its pay pool, rather than add more money to it, even though the bank earned a healthy $4.95 billion for the quarter, above Wall Street expectations."

The Times' report is factually correct, but misleading. Goldman's record fourth-quarter profit was the direct result of trimming allocations to the bonus pool. If Goldman had added the "normal" amount to the pool, fourth quarter earnings would have been very disappointing.

Furthermore, Goldman's "concession to the public outcry" still delivered a whopping 57% of net earnings to employees. "Normal," as Goldman defines it, would have delivered 70% of the company's net earning's to employees...leaving only 30% for shareholders.

Wall Street's very abnormal perception of normal has persisted for a long time. In fact, we highlighted this perverse condition three years ago. In a column entitled "Bonus Envy" we observed, "Karl Marx would be proud...sort of. The laborers of five major Wall Street firms will receive a much greater share of their companies' 2006 profits than the owners of these five firms. Who could have imagined that the ultimate bastion of capitalism would strike a decisive victory for the laborers of the world?"

But it was true. Thanks to tens of billions of Dollars of year-end bonuses, the laborers of Wall Street's five biggest firms received twice the remuneration of the 'capitalists' who owned them – i.e. the stockholders. In other words, employee compensation at Goldman Sachs, Merrill Lynch, Bear Stearns, Lehman Bros. and Morgan Stanley totaled $60 billion in 2006 – double the year's earnings of the five firms. Almost half of that compensation arrived in the form of year-end bonuses...and the largest bonuses arrived in the bank accounts of a few privileged employees.

"As fans of Das Kapital might recall, Marx argued that 'capitalists' deserve no 'surplus value' from their investments because the capitalists contribute no labor to the production process. Since labor, alone, contributes value to production, Marx asserted, the laborers deserve the profits of the enterprise. Wall Street's major brokerage firms seem to agree."

Perhaps there was nothing inherently wrong with Wall Street's perverse part-time Marxism. But it just didn't feel right. Those enormous bonuses may have been perfectly appropriate and justified and ethical as the housing bubble reached its peak. But it felt quite the opposite. 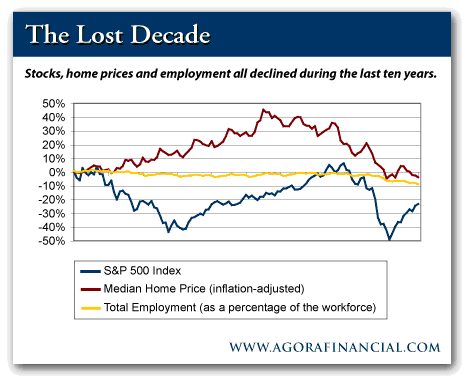 The "lost decade" continues to add days to its lifespan. Until the economy starts to find its way again, trade nimbly and invest selectively. And beware Marxism lurking deep inside the most capitalist-seeming ventures...