END_OF_DOCUMENT_TOKEN_TO_BE_REPLACED

Pay on Wall Street is on pace to break a record for a second consecutive year...

NO MATTER how many times the Conference Board reports dismal consumer confidence, or the Institute for Supply Management reports anemic manufacturing activity, or the National Association of Realtors reports abysmal home sales, some economist somewhere will track down a hopeful data point and force-feed it into his "improving economy" scenario, writes Eric Fry, reporting from Laguna Beach, California, for The Daily Reckoning.

When, for example, the Census Bureau reported a steep 1.3% drop in durable goods orders last month, the chief US economist at Barclays Capital, Dean Maki, crowed, "This is reassuring news. Capital goods spending still seems to be on a very solid underlying trend."

Ah yes, capital goods spending – the sub-sector of the durable goods report that is believed to correlate closely with private-sector business activity.

But as the chart below shows quite clearly, this "solid trend" is looking a bit shaky. 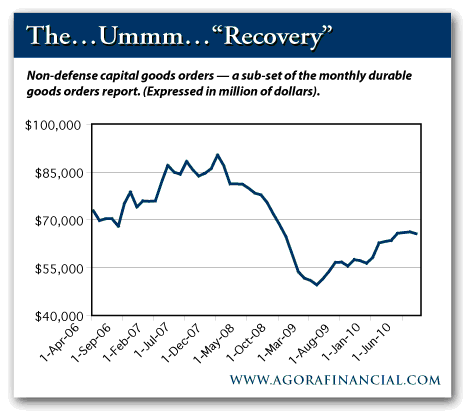 Capital goods orders may have bounced off the bottom of very depressed levels, but they are stalling well below optimal levels. The same could be said for the overall American economy. It is bouncing off of depressed levels. But this bounce seems to contain a strange and unhealthy mix of losers and winners.

Despite a financial crisis that nearly doomed Goldman Sachs for all- time, the reviled financial firm recently reported all-time record profits. Goldman's third quarter result pulled the company's trailing 12-month profit down from record territory. But that "disappointing" $1.9 billion quarterly profit owed much of its disappointment to the hefty $3.8 billion bonus expense that Goldman set aside during the quarter. For the first nine months of the year, Goldman has booked a net profit of $6 billion, while setting aside $13.1 billion in bonus expense.

Elsewhere on Wall Street, a similar story has been unfolding. "Pay on Wall Street is on pace to break a record for a second consecutive year," the Wall Street Journal reported recently. Even though net profits at the top financial firms remain about 20% below the peak levels of 2006, the Journal relates, compensation has increased more than 20% over the same timeframe. And just like that, you've got record compensation. "Financial overhaul has affected the structure [of Wall Street compensation]," says the Journal, "but not the level."

But while prosperity has been quick to return to Wall Street, it has been slow to return to the American manufacturing sector. In the chart below, the yellow line tracks the combined earnings growth of four big "dirty fingernails" American companies: Dupont, Alcoa, Home Depot and 3M. The blue line tracks the same trend for Goldman Sachs. The two lines do not look very similar, do they? The yellow line is downward- sloping and remains well below the high-water mark of 2007. The blue line is upward-sloping and has exceeded the high-water mark of 2007. 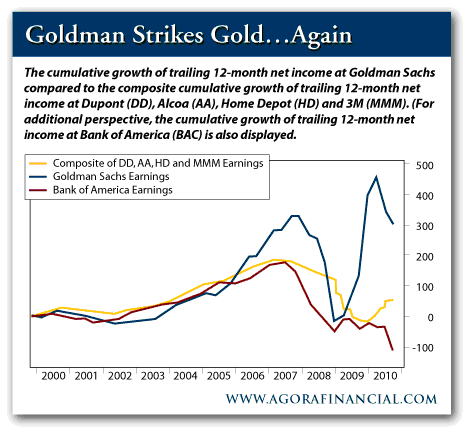 And the red line? That's Bank of America's dismal profit trend. The big bank doesn't bend metal, of course, but it does operate in almost every corner of American commerce, both industrial and consumer. Res ipsa loquitur.

And yet, despite the fact that Bank of America is still struggling and most of the manufactures of America are merely kicking the can down the road, quirky signs of apparent economic resurgence appear from time to time.

During a brief jaunt up to San Francisco last weekend, your editor encountered a sold-out city. On Saturday night, every single 4-star and a 5-star hotel in San Francisco was sold out. Not a single luxury hotel room available – which meant that the few available 3-star hotels were asking 4-star prices. Two-star hotels, for their part, were trying to extract three-star prices. But your editor declined the price-gouging and took his lodging Dollars up across the Golden Gate Bridge to Marin County.

For less than the price of an overpriced three-star hotel in San Francisco, your editor took a room at the delightful San Anselmo Inn. And with the money he saved, he purchased a fantastic meal at Insalata, a restaurant across the street from the Inn. The restaurant was full, though not jam-packed.

Elsewhere in Barbara Boxer-land, the story was the same. From Carmel to Los Gatos to San Francisco, your editor and his entourage strolled into restaurants that were full, without being jam-packed. They waited 15 to 20 minutes for a table in almost every venue.

But these random, narrowly focused anecdotes do not square with most of the evidence from the front lines of capital formation. A lifelong friend of your editor's – whose family has been operating a very successful specialty steel business in Southern California for the last several decades – is enjoying much less success today than in years past. This steel business that once threw off hundreds of thousands of Dollars per month in profit, now throws off red ink every once in a while. On an annual basis the business is still profitable, but topline sales remain about 40% below the peak levels of three years ago.

"Can you see any signs of a pickup in activity?" we asked our friend last week.

"Nope. Nuthin'...We've got the same customers we've always had – at least the ones who haven't gone out of business – but they're all placing much smaller orders than they used to. So the guys who used to place $100,000 orders are placing $10,000 or $20,000 orders. Everyone is cautious. No one wants to hold any inventory. And everybody I know is telling the exact same story."

Busy trading desks in Manhattan and busy restaurants in San Francisco are not signs of recession. But neither are barely profitable manufacturing businesses the signs of recovery.

The current economic rebound still feels more like hope than substance, more like a Wall Street fairy tale than a Main Street reality. On the other hand, the stories of economic vitality that are flowing out of the world's emerging markets seem to be very real indeed.