END_OF_DOCUMENT_TOKEN_TO_BE_REPLACED

Bud Conrad looks deeply into the entrails of US government spending.

Recently I had the pleasure of having lunch with the
Comptroller General of the United
States, David M. Walker. He heads up the
U.S. Government Accountability Office (GAO), the government’s internal
watchdog. As he was about to give a talk on out-of-control government deficits,
he had in his briefcase a chart on the size of the government’s obligations over
time. Our discussion about those obligations over lunch was followed by an
email exchange, and Walker
kindly helped me source additional GAO data, all of which allowed me to confirm
my analysis of the budget with projections from the Congressional Budget Office
(CBO).

I have also met with Douglas Holtz-Eakin, head of CBO, who
can competently recite the situation of six different budget projections without
notes. The combined scenarios of the GAO and CBO provided me with the basis to
create the following projection of the U.S. budget: 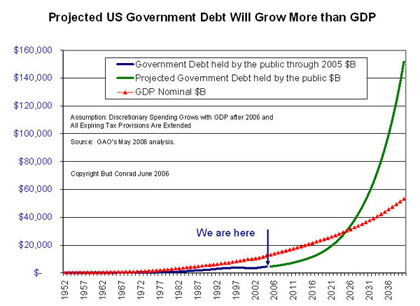 A clear picture emerges of a government completely out of
control. The blue line is the history of the U.S. Federal Government debt. The
green line shows the path we are now on, with debt soaring to impossible levels
against projected GDP. Importantly, the source isn’t some crazy hand-waving
blogger: these are the government’s own projections—and we all know they have
every incentive to accent the positive. If this is the best they can do at this
point, then you know things are not just bad, they are calamitous.

This glimpse at the future clearly shows that the debt of
the U.S.
will, in the foreseeable future, go from being a troubling yet manageable
fraction of the economy to being several times the size of economy. That can’t
happen without serious repercussions.

The government will be spending money they don’t have, which
means creating more of it out of thin air and diluting the value of all the dollars
that came before. It doesn’t take a Harvard MBA to know that the kind of deficits
projected above guarantee a persistently weak dollar, higher inflation and higher
interest rates going forward.

You may be right to criticize this analysis as only one of
many scenarios being developed all the time and that there are other assumptions
that lead to other estimates, and you would be right.

Who is responsible for this sin of profligate spending? You
could start by pointing a finger at the House of Representatives as they are constitutionally
charged with holding the purse strings of the U.S. government. They voted for the
spending and programs we are now saddled with, they pass tax programs, and vote
in the big supplemental bills that fund the wars.

Entrusted with allocating the biggest sums of funding in the
world, they clamor for more and, in the process, act like termites chewing away
at the fiscal underpinnings of the economy, assuring the future bankruptcy of
the nation. And it is not just the modern politicos that are responsible, but a
failure to pursue sound monetary policies that extends back decades. Why do
they do it? That answer is easy and reflective of human nature… they do it to
curry favor with their constituents in order to get reelected.

Which further points the finger at us, the American public,
who instead of voting the bums out for wasting our money and handing a legacy
of debt to our grandchildren’s grandchildren, happily pocket the pork belly
doled out and reward the most prolific spenders with our votes.

The bottom line is that debt and deficits are baked into the
cake, exacerbated by the demographics of retiring baby boomers and a government
that not only shows no intention of slowing its spending, but quite the
opposite. In fact, like a penniless smoker breaking a child’s piggy bank to buy
a pack, the debt-addicted government has already spent the supposed “Trust
Funds” of Social Security and Medicare.

The government is closer to bankruptcy than anyone who has
not studied the situation can guess. You will hear government apologists claim
that the government can’t go bankrupt because they are the government, and along
with a complicit Federal Reserve, they can meet any debt obligation because
they have the printing press. That is precisely the problem. They can print any
amount of money they want. That has been theoretically possible since we went
off the gold standard in 1971.

It is this loss of any constraint on government spending
that has let the genie out of the bottle. The track is now laid. The long-term
future of the dollar is not in question. And to the extent that it is the basis
of all other currencies, the reserve currency of the world’s central banks, all
currencies are doomed.

Gold and the quality companies that produce or competently
explore for it (our focus in the International Speculator) should no longer be
viewed as entertaining speculations, but as portfolio requisites.