END_OF_DOCUMENT_TOKEN_TO_BE_REPLACED

But the sinking Dollar should please Trump...

WELL into 2018, a few FX traders are still struggling to understand the underlying bearish trend of the US Dollar, writes Gary Dorsch at Global Money Trends.

How can it be that US yields are rising sharply, yet the US Dollar is so weak at the same time?

The answer is simple: the US Dollar is not going down despite higher yields, but because of them.

Higher yields mean lower bond prices and US bonds are lower because foreign based investors don't want to buy them. This is an entirely different paradigm to previous years. 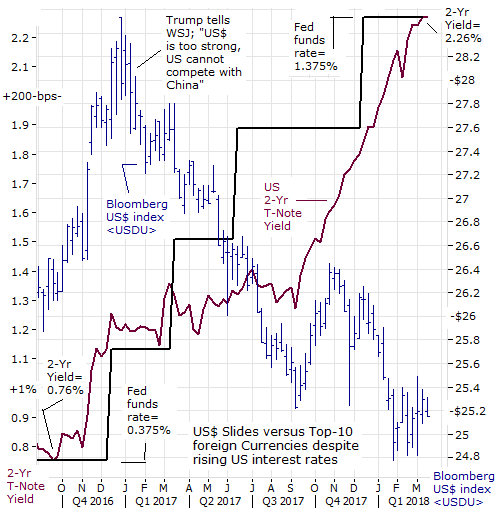 Today, the US Dollar's weakness is linked to the renewed focus on the US's twin deficits (the sum of its budget and trade deficits), with the US's budget deficit set to deteriorate dramatically in years ahead. The mirror image to all of this is that the trade flow picture into Emerging Asia, Europe, Latin America, Russia, and Japan has been improving over the past year.

The US Congress's bipartisan vote last month to increase spending by nearly $300 billion over the next two years comes on the heels of the $1.5 trillion, 10-year tax cut President Donald Trump signed into law in December.

As a result, Wall Street strategists have slated over $1 trillion in new debt issuance this year alone to fund them. That's only expected to grow as an aging population further fuels entitlement outlays while rising interest rates buoy Washington's debt-servicing costs.

The White House's 2019 budget proposal released last month would raise the deficit to $984 billion, nearly double projections from last year.To keep pace with this rising shortfall, net Treasury issuance to the public will average $1.27 trillion per year over the next five years, according to strategists at BMO Capital Markets.

That compares to an average of $658 billion over the past five years.

The US Dollar has been besieged by a Trump administration that likes to jawbone the US Dollar lower, and contributed to the greenback's 12% decline against a basket of currencies belonging to its Top-10 trading partners, since the start of 2017. While the two-year Treasury yield has continued its ascent this year – reaching 2.28% for the first time since 2008 – its 120-day correlation with the Bloomberg Dollar Spot Index has tumbled to 0.23, and down from an average of 0.57 in 2017. (A reading of 1.00 would indicate the gauges move in lockstep, while -1.00 means they move in opposite directions.)

President Trump would like to see the US Dollar getting weaker against the Euro, Chinese Yuan, and Japan's Yen, believing that will be more beneficial for America. Trump was elected for many reasons, but growing frustration over the negative impacts of trade played a big part. He won the election in the manufacturing states hardest hit by import competition, including Michigan, North Carolina, Ohio, Pennsylvania and Wisconsin. And he won the highest percentage of union voters of any Republican president since Ronald Reagan in 1984.

More than on any other issue, Trump has a long-standing, consistent view on trade with the rest of the world: They are winning and the US is losing. He keeps score by counting up the US's trade deficit. For the past three years, the score has been about the same – the US loses by more than $500 billion each year. The United States last ran a trade surplus in 1975.

Since China's entry into the WTO in 2001 it has become the most formidable economic competitor the United States had even seen. With multi-national companies confident the United States could no longer threaten punitive tariffs on China, investment soared, and exports followed. Between 2001 and 2015, the annual US trade deficit in goods with China quadrupled from $83 billion to $375 billion. In the 2000s, some 6 million manufacturing jobs disappeared, in part due to growing import competition from China.

Trump claims the trade deficit is a result of bad trade deals. For all of 2017, the US racked up a trade shortfall in goods and services with its global trading partners of $568 billion, a 12% jump from the prior year and the widest annual gap since 2008. That's a major embarrassment for President Trump. The trade deficit with China hit a record high of $375 billion in 2017, defying President Trump's repeated promises to shrink a number that he regards as a test of whether other nations are treating the United States fairly.

Meanwhile, the US Dollar is bleeding red ink. Tax receipts into the US Treasury in the first five months of the current fiscal year, from October thru February, were $1.286 trillion while outlays were $1.677 trillion. Receipts are growing +4% per year, on average, while outlays are rising +7%, on average. Also troubling was the jump in interest on the public debt, which in the month of February jumped to $28.4 billion, up +10.6% from last February and the most for any February on record.

In the first five months of this fiscal year, the interest cost of servicing the US-debt soared to $203 billion, up +8% compared with a year ago, and the most on record for any Oct-Feb period. The sharp increase comes as the US public debt rapidly approaches $21 trillion. And with the effective interest rate now rising with every passing month, it is virtually assured that this number will keep rising for the months ahead.

In turn, foreign investors are having great doubts about the wisdom of financing the US's massive budget deficits, and as a result, the flows of capital could begin to swing to countries with exemplary fiscal discipline, such as Germany, Russia, and Switzerland, and on a comparative basis to the exceeding reckless US government, bond markets in Canada and Great Britain look like better bets.